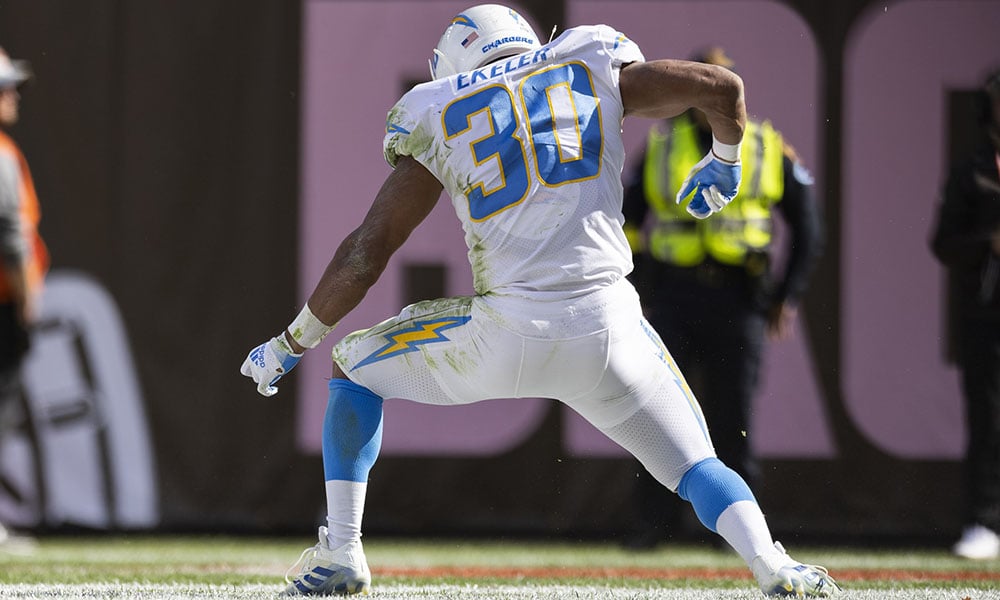 We offer up our weekly round-up of the top fantasy performers and who to watch moving forward. Week Five brought another monster game for the Buffalo Bills and Josh Allen, who set a new career-high with 424 passing yards. Geno Smith also stayed hot with his third consecutive QB1 week. After a month of frustrating play, Justin Fields broke through with his first QB1 game of the season. After a down Week Five, Jared Goff fell from the top-five down to QB9, while Smith jumped from QB9 to QB6. The low-end QB1s shuffled around as the injured Tua Tagovailoa, along with Russell Wilson fell from the QB1 ranks, replaced by Derek Carr and Kirk Cousins.

The Raiders got stung again for a QB1 performance as Patrick Mahomes led his team to a huge comeback on Monday night. This week, Vegas gets a break as they are one of the first teams to have a bye week. Fantasy managers can’t take advantage of the Raiders this week. Instead, check out the teams who have allowed four QB1 games through four weeks. That list includes the Falcons, Lions, Chiefs, Steelers and Titans. Detroit and Tennessee are also off this week, but Atlanta face Jimmy Garoppolo, Kansas City plays the “game of the year” against Allen and the Bills and Pittsburgh faces off against Tom Brady.

Six teams have yet to allow a QB1 game this year. The Bills already held Lamar Jackson in check, but can they do the same to Mahomes this week? Other matchups to consider avoiding include the Saints quarterback, which could possibly be Andy Dalton against his former team, the Bengals. Jalen Hurts has been one of the most productive players in the league so far, but faces one of the best defenses through five weeks, division-rival Dallas. Philly has also not yet allowed a QB1 game, which is not good news for Cooper Rush, not that fantasy managers were starting him anyway. Finally, Denver (vs. Justin Herbert) and San Francisco (vs. Marcus Mariota) also offer challenging matchups. After a slow start to the year, there were many concerns about veteran running back Austin Ekeler. He’s answered all of those and more in the past few weeks and produced another overall RB1 week. Rookie Breece Hall has been trending up after a near no-show in Week One and produced his first RB1 game, thanks in part to his 100-yard receiving performance. The 49ers got multiple running backs involved in their offense, which is no surprise. It may be a shock though to see that one of those was veteran Tevin Coleman, who scored twice on his way to an RB1 game. The season-long running back underwent massive shifts in Week Five. Ekeler is the new overall RB1 while Saquon Barkley dropped from the top of the list to RB3. Josh Jacobs and Derrick Henry each climbed multiple spots, with Clyde Edwards-Helaire, Jamaal Williams and Miles Sanders were fallers. Hall and fellow rookie Dameon Pierce, along with veteran Leonard Fournette made appearances on the list, taking the place of Aaron Jones, James Robinson and Cordarrelle Patterson.

The Chargers and Seahawks have been the most forgiving teams against opposing running backs. This week, Seattle faces a banged-up Cardinals team. It’s not yet clear which running back will start for Arizona, but it could be a good opportunity for backup Eno Benjamin. The Chargers face veteran Melvin Gordon on Monday night.

The Rams have yet to allow an RB1 game but that will be tested against Christian McCaffrey and the Panther this week. The Bengals (vs. Alvin Kamara), Buccaneers (vs. Najee Harris) and Cowboys (vs. Miles Sanders) allow less than 18 fantasy points per game to the running back position, as do the Titans, who are off this week. The Bills receivers helped their quarterback to a dominant performance, highlighted by a pair of long touchdown receptions, including a 98-yarder for Gabriel Davis. Davis finished as the WR1 for the week with veteran Stefon Diggs claiming the WR7 spot. Little-used sophomore receiver Dyami Brown only caught two passes but both went for scores as he notched his first-ever WR1 game. Christian Kirk and Ja’Marr Chase had subpar games in Week Five, pushing them off the season-long WR1 list. They were replaced by Mike Williams and Tyler Lockett. Davante Adams‘s two-score performance on Monday night vaulted him from WR8 to WR5. The trio of Cooper Kupp, Diggs and Justin Jefferson have established themselves as the clear top-three scorers.

The Steelers have surrendered five WR1 games through five weeks, including a pair to Bills receivers last week. In Week Six, they face the challenge of the Buccaneers offense, including Mike Evans and Chris Godwin. The Rams are another team to target as they’ve allowed four WR1 games. Maybe this is the beginning of the Panthers’ offensive turnaround, although it will have to be done with backup quarterback PJ Walker.

Four teams have yet to allow a WR1 game through five weeks. While the Raiders are on bye this week, the Jaguars (vs. Michael Pittman), Vikings (vs. Tyreek Hill/Jaylen Waddle) and the Patriots (vs. Amari Cooper) are teams to consider avoiding this week. The story of the week was Saints tight end…er, quarterback….er, running back Taysom Hill. For years, Hill frustrated fantasy managers as his quarterback label combined with unpredictable usage made him unusable in fantasy lineups while stealing scores from Drew Brees, Kamara and the gang. Now, Hill has been moved to tight end, but he’s drawn only one target on the year. In Week Five, Hill passed for a touchdown and ran for three scores on his way to one of the top “tight end” performances of the season. Hill’s big game pushed him from outside of the TE1 ranks to TE7 while Dallas Goedert and David Njoku were also big risers. Gerald Everett, Pat Freiermuth and Tyler Conklin fell down the list and Will Dissly and Darren Waller fell off completely.

The Seahawks have allowed five TE1 games through five weeks and face off with Zach Ertz and the Cardinals this week. The Falcons (vs. George Kittle) or Colts (vs. Evan Engram) are also nice matchups for their opponents.

The Bills, Browns, Saints and Giants have yet to allow a TE1 game this season. This week, this could hurt the fantasy production of Travis Kelce (vs. Bills), Hunter Henry (vs. Browns), Hayden Hurst (vs. Saints) and Mark Andrews (vs. Giants.)