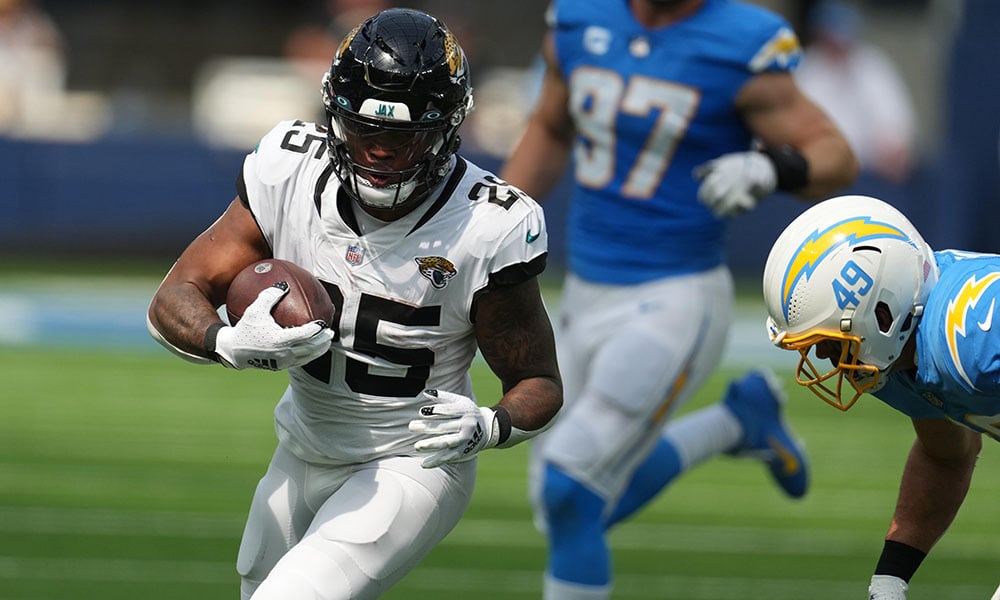 Which dynasty storylines are you keeping your eyes on this week?

Heading into week four, we are able to process information and apply it with more confidence. Typically speaking, a trend requires three data points. Week four will have some intriguing storylines to watch out for.

We need Moore in Carolina

DJ Moore has ten, yes ten, total touches through three weeks. Baker Mayfield may be the problem as we saw him not able to support Odell Beckham in Cleveland – now he is unable to support Moore early in Carolina. Head coach Matt Rhule will need to do a better job to get the ball into one of his best players and a tremendous playmaker.

The positive coming from this situation is Moore does lead the team with 18 targets, but only has seven receptions to show for it. This 2022 season is not shaping up well following his three straight seasons with over 1,200 scrimmage yards.

Noah Way This Is Happening?

The Dallas Cowboys head into week four against the Washington Commanders with Cooper Rush expected to make another start at quarterback. However, wide receiver Noah Brown has caught eyes through the first three weeks, having five receptions in each game. Brown has stepped up with Michael Gallup recovering from his ACL injury. There is a possibility that Gallup returns in week four.

Regardless, it may not seem like it will matter. Brown is proving he is worthy of the opportunity as he is leading the team in receiving yards. Dak Prescott is reportedly eyeing a week five return and will provide a boost to the offense. This Brown situation feels similar to Gallup’s when he was behind Amari Cooper and CeeDee Lamb. Brown is 26 years old and will be looking for a new contract following the season.

The Denver Broncos are 2-1 heading into week four. It seems Russell Wilson is not cooking like he was supposed to do – completing 59% of passes with only two touchdowns. The entire offense has scored only three touchdowns.

A huge divisional game against the 0-3 Raiders this week is a pivotal time for the Broncos to get on track. Head coach Nathaniel Hackett will need to figure out this offense and understand how to get the ball to his weapons. Hopefully his recently hired ‘game day assistant’ Jerry Rosberg will help him out, or maybe he will need to hire an assistant for the assistant.

It is time to let Russ cook.

James Robinson has done what we hoped Cam Akers would do – defy the odds. He has taken control of the Jaguar backfield and is PPR RB4 with 266 scrimmage yards and four touchdowns. This injury happened nine months ago and he has been playing well, just like he was before.

Robinson is out-touching Travis Etienne by 23 touches. You would figure at some point Etienne will have a huge game, but Robinson has his role solidified. This is also a contract year and will be a situation to monitor if the Jaguars decide to extend him or not. The dynasty outlook is unknown with a previous UDFA turned RB1.

The Jacksonville Jaguars have turned the franchise around with first-year head coach Doug Pederson. Through three games they have won two games and last year, with Urban Meyer, they were 2-11. Trevor Lawrence has had a great start to his sophomore campaign and the Christian Kirk contract seems to be working out.

The offense is clicking and spreading the ball around while also making sure their playmakers are getting the ball. Pederson has done a tremendous job turning this talented team around. One thing that comes to my eye is a that 2023 rookie wide receiver would be a perfect fit for this offense. After Kirk, there is Marvin Jones who will be a free agent after the 2022 season. Zay Jones signed through 2024 and it is likely he is on the team in 2023 with his dead cap situation. Regardless this offense is fun to watch.

It is wheels up for the Jaguars this season and it starts with an exciting week four matchup against the Philadelphia Eagles.

The Return of Zach Wilson

The New York Jets announced Wilson will be their starter for week four. The offense with Joe Flacco was funneled through Garrett Wilson and Tyler Conklin. All the Elijah Moore stans (me) are hoping for a change. The Pittsburgh Steelers present a tough opponent for Wilson but his offensive weapons have changed drastically since 2021.

It would be foolish to believe Garrett Wilson will be replaced by Moore, but the receiving duo will look to get on the same page and help turn the season around with Zach Wilson back at the helm. I look at the duo similarly to Tee Higgins and Ja’Marr Chase – not player archetype or roles, but talent-wise, they can both provide fantasy relevancy.

The remainder of the season is crucial for Zach Wilson – specifically his dynasty future and his 2023 starting quarterback job.

Fitting six storylines into one article never feels like enough. I always want one or two more. I doubled-dipped in the Jaguars while easily could have mentioned Justin Herbert and his rib injury. Lamar Jackson is putting together (another) MVP season. I just want to stay away from situations we may all know about, or at least the vast majority.

I do have my eyes on a few situations to mention next week, and spoiler alert, the main one will be Justin Fields and if the Bears coaching staff will figure the play calls and schemes out for him. Nevertheless, there are multiple situations to monitor.

Corey Spala
Contributor at Dynasty League Football
Corey studies human behavior and analyzes data for a living and applies it to dynasty football. He utilizes a blend of data and humor to guide you through articles and/or videos. Shoutout to the process and shoutout to (hopefully) helping you in your dynasty leagues.
Latest posts by Corey Spala (see all)
Dynasty Fantasy Football Six Pack: Week Four Storylines to Watch