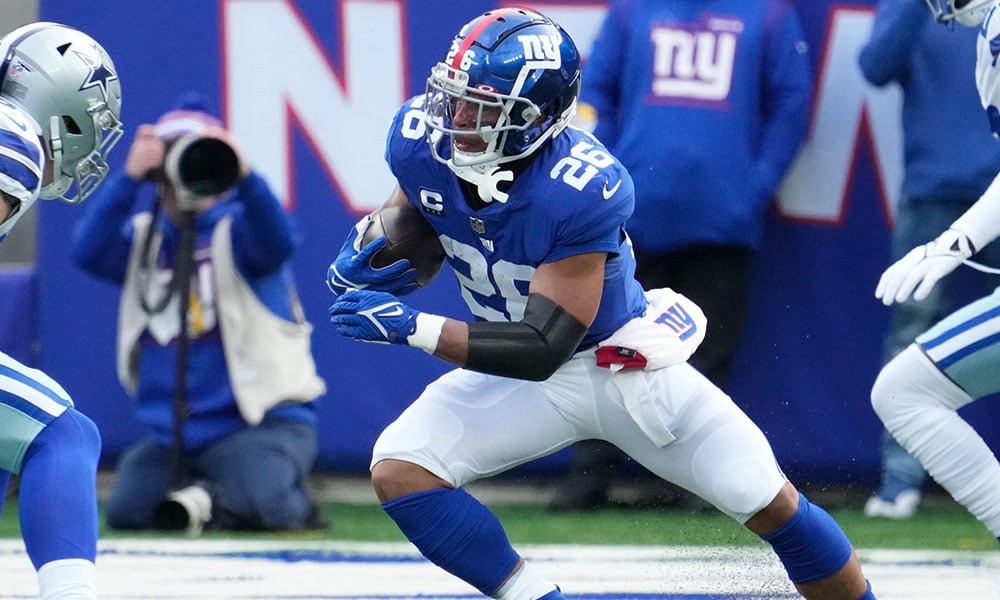 We answer your dynasty mailbag questions.

Welcome back to the DLF Mailbag, the preeminent mailbag in all the dynasty fantasy football land. This year I’ll be answering questions from you via Twitter, Discord (if you haven’t joined our Discord, now is a great time to do so), or the old-fashioned way (via email).

It doesn’t matter how you get me your questions, just make sure you get them to me and I’ll answer them every week. Nothing is off limits and there is no such thing as a stupid question, so fire away!

It's Friday! I need some questions for the @DLFootball mailbag, go ahead and Pat Benatar me! Off-season plans, rookie drafts, trades, whatever you want to ask.

First up is a question I expect to be asked a lot this off-season – do I trade the rookie 1.01 for a haul?

After eliciting some more details from this tweeter, I sussed out he plays in a start nine, superflex league. His starting lineup consists of Trevor Lawrence, Mac Jones, Jonathan Taylor, DK Metcalf, and Mark Andrews.

Under normal circumstances, I would advise anyone who has the 1.01, or any strong singular asset, over a package, but in this case, I’ll take the Saquon Barkley, 1.05, and 1.06 side. You may see I only named five starters because the rest of his roster isn’t very good. This team is more than one Bijan Robinson away from being a title contender. Adding Barkley, whose 17.8 PPG last year was good enough for the RB5 finish, would be a good start toward that goal.

The flexibility that the 1.05 and the 1.06 bring could help to get this roster into contender status sooner than later. Those picks can be used independently to select rookies or trade for another top-20 WR, or in combination to upgrade at quarterback. Robinson is going to be a great player, but the package is too hard for me to pass up.

Next up, how about some rookie talk?

You want me to take your hand and surrender all my dreams to you? Ok…

What receivers from the 2022 class would you take a 2023 first for? (And I guess a follow-up, what’s the latest first you would take for them?) Wilson, Olave, London, Watson, Pickens, Burks, Moore, J Williams pic.twitter.com/chGP68g6Fe

This will be an easier exercise if I ranked these players, so I’ll do that first.

Chris Olave, Garrett Wilson, and Drake London make up my first tier of this group, and if you’re not sure why, you should check out Peter Howard’s latest article, which speaks to the main reasons for that tier. Each of those three players has WR1 upside in their range of outcomes.

Then it would be a tier of George Pickens, Christian Watson, Treylon Burks, and Jahan Dotson; Jameson Williams follows in his own tier, and then Skyy Moore brings up the rear. I would take any 2023 first (not that anyone’s offering) for Moore and Williams. Both players disappointed, even if Williams did so on a smaller sample size than Moore, and I’m ready to reroll on both.

Burks, Watson, Dotson and Pickens can be had for any first-round pick 1.10 or earlier. Watson and Pickens did well enough to believe they could be WR2s, while I hold out hope for Burks based on his collegiate profile and his 17.6% target share when was able to play in between injuries this year.

I’m not trading Olave, Wilson, or London unless I’m offered the 1.01 in start-one-QB leagues, and at least the 1.03 in superflex leagues. Each player exceeded a 22% target share and 10.9 PPG in their rookie seasons. They are future WR1s and I’m not moving them unless I’m paid beyond market value.

We get a little personal with this next question.

What's your go-to response when someone sends you a garbage trade offer?
A. Silent decline
B. Polite decline
C. Snark decline
D. "Why would I do that?" decline
E. Other

As you may already be aware, I co-host the Dynasty Trades HQ podcast, and one of our earliest bits on that show was calling out #TrashDynastyTradeOffers. While it was and continues to be a blast making fun of some of the horrible trade offers you receive, it’s not actually productive.

We’ll go ahead and label that as option C of the choices listed above. Snark declines are probably the worst response of any – it serves no purpose other than giving you a momentary feeling of joy. Silently declining the offer is fine, but it’s also not very productive. A polite decline, which I read as declining with a message along the lines of “thanks for the offer” would be a bit better than just silently declining.

Option D is my favorite of the above options, though you have to be gentle in how you ask “Why would I do that”? If you present it in a way that appears to be genuine curiosity and not snarkiness, this can allow you to extract valuable information from the other manager. You can find out how they value players, positions, and their general thoughts on trading. This information is all valuable. Our game is one of strategy and the more information you can obtain from someone the better.

If you are not a fan of speaking/messaging other humans (I can relate), you can also counter their offer. Based on their initial bad offer to you, you can infer that they either value players poorly or they think little of your dynasty acumen. Counter their offer with a less terrible offer than the one they sent to you, trying to exploit their bad valuation of players. Hopefully, they accept. If they don’t and instead counter, then that’s even more information they’re providing you. The important thing to remember is that every trade offer you receive, with or without comments, is telling you something, you just need to figure out what that something is.

Should you pass on Gibbs for the first 4 QBs with the depth of the rb class?

In superflex leagues, I would pass on Jahmyr Gibbs in favor of both CJ Stroud and Bryce Young without question. Where it gets interesting is if you should select Anthony Richardson or Will Levis over Gibbs. First off, if I’m in need of a quarterback I’d first look to use the 1.02, 1.03, or 1.04 to acquire a quarterback. Chasing quarterbacks in rookie drafts is a dangerous game. You might end up with Josh Allen or you could end up with Josh Rosen. I much prefer to remove that risk and buy certainty if possible.

But you may not be able to move the pick, so let’s deal with that scenario. If I have no need for a QB1 or QB2, I would likely draft Gibbs (or a wide receiver) and pass on Levis and Richardson. I understand the counterargument of just drafting the QBs because if they do hit, their trade value or production value would far exceed that of any other player you could draft in their place. But I’m also worried about the chances of either QB hitting based on what we saw of them in college. Richardson has an absurd skill set, but he’s yet to give much reason to believe that the sum will equal the parts, and I’ve found Levis underwhelming.

Thanks for all the questions this week! I look forward to doing this again next week. You can also always ask me anything on Twitter @ShaneIsTheWorst.

Shane Manila
Contributor at Dynasty League Football
Shane is Philly born and bred and if you've ever heard his unfortunate accent, you already know this. If he seems a bit defensive, forgive him, it's just a Philly thing. Nothing makes Shane happier than thinking about dynasty fantasy football, except for talking about it or maybe writing about it.
Latest posts by Shane Manila (see all)
Dynasty Fantasy Football Mailbag: Saquon Barkley and the Rookies

Good Stuff as always. Thank you