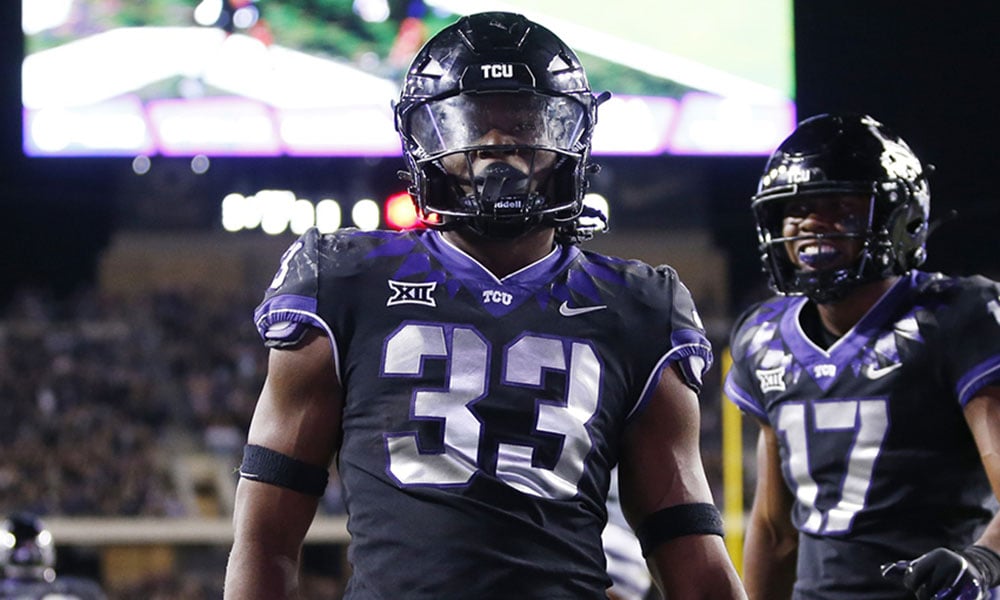 Who were some of college football’s top performers over the weekend?

Last week’s slate of games was packed with a lot of action. We started things off with an upset alert with Ohio State and Northwestern, but the Buckeyes were able to come away with a 21-7 victory. The first-half Northwestern lead had taken the wind out of the sails of many Ohio State fans. This was a game that a lot of people monitored because the game script was tight and it had the feeling that it could go the other way if the dominos fell in a different direction.

All eyes were on the Tennessee and Georgia game. There were a lot of questions going into this matchup. Georgia answered them all as they remain the powerhouse of college football with a 27-13 win over the Vols.

The nightcap had Alabama and LSU which is one of the best games of the year. It was an intense contest that had everyone glued to the television. After going into overtime, LSU was able to stun Alabama with a 32-31 win.

As we march further into November conference play only gets hotter. Below are some of the top matchups for week 11.

Whether you like it or not, Nix is turning things around. He was once considered a high-end high-school prospect who flopped during his tenure at Auburn. Now he’s at Oregon and is considered one of the best quarterbacks in the country. Colorado was the next stop on his redemption tour in week ten. In this game, he completed 20 of his 24 pass attempts for 274 yards and two touchdowns. Oregon currently has an 8-1 with their last loss being against the unstoppable Georgia Bulldogs.

We all need to put respect on Daniels’ name. He has been playing well this season. Against Alabama, he had the game of his life, completing 22 of his 32 pass attempts for 182 yards and two touchdowns while also rushing for 95 yards and one touchdown. He was very methodical and efficient against one of the best defenses in the country.

Young is Mr. Wizard. Even in a tough game that ended in defeat against LSU, he still made some beautiful plays. His ability to maneuver the pocket and keep his eyes downfield is world-class. It doesn’t matter what the stakes are, he’s not going to get rattled. In a scrap against LSU, the stat sheet doesn’t look glamorous, but he did manage to complete 25 of his 51 pass attempts for 328 yards and one touchdown while also tossing one interception.

The third-year sophomore running back has had a very quiet season although he has rushed for 611 yards and five touchdowns while averaging seven yards per carry. He had his second-straight 100-yard performance against Miami, rushing for 128 yards and two touchdowns. Per Pro Football Focus, Benson is averaging 4.80 yards after contact per attempt which leads all running backs with 50 carries or more.

Miller has six 100-yard rushing performances in his last seven games. Against Texas Tech he rushed for 158 yards and one touchdown. Out of all the running backs in college football, he has developed into one of the biggest risers. He’s finally over 1,000 yards rushing and has 12 touchdowns on the season. Everyone should expect him to be one of the most talked-about running back prospects in the 2023 NFL Draft.

Robinson is a generational running back prospect who doesn’t need to play another game. He is a candidate to be a top-ten pick in the upcoming NFL Draft. We saw him steal the show against Kansas State when he rushed for 209 yards and one touchdown. Many dynasty gamers already consider him a top running back prospect in dynasty. Let’s hope Texas wraps him in bubble wrap for the rest of the season.

The sophomore running back prospect is one of those players who will randomly take over a game when you are least expecting it. He had the best performance of his career against Oklahoma State when he rushed for 224 yards and one touchdown. He also caught six balls for 110 yards which is 55 percent of his receiving output so far for his collegiate career.

Hull is going to be a trendy late-round pick in dynasty rookie drafts next spring. His ability to catch the ball out of the backfield just indicates that he has the potential to score fantasy points at the next level. In one of the toughest matchups of his career, we saw him flourish, rushing for 122 yards and one touchdown. This game had a weird game script where Northwestern had a 7-0 lead during a large portion of the first half.

Brown leads all running backs with 1,329 yards. With three games left on the schedule along with a bowl game, he is a candidate to hit the 2,000-yard mark. The fifth-year senior has rushed for 100 yards or more in every game this season. Brown is averaging 2.93 yards after contact per attempt while with 62 missed tackles on the year. He also leads all running backs with 41 carries for ten yards or more.

Johnson is an underrated freshman running back. He has good size-adjusted speed and I believe soon, there will be many publications talking about how talented he is as a runner. Against Purdue, we saw him breakout, rushing for 200 yards and one touchdown. It hasn’t been a great year for Iowa as they are 5-4, but Johnson is growing in his role as the team’s bell cow running back.

Allen has been nothing but productive during his collegiate career. He will be one of the top running backs in the 2024 NFL Draft. In a win against Maryland, we saw him rush for 119 yards and one touchdown. This was the 14th 100-yard game of his career.

Ibrahim has come back from a nasty Achilles injury to rush for at least 100 yards in every game this season. Against Nebraska, he rushed for 128 yards and two touchdowns. The senior running back has 15 rushing touchdowns and will look to be another talented prospect in a stacked 2023 running back class.

Martinez was the talk of Friday night. He has been quietly breaking out with three-straight 100-yard rushing performances. Against Washington, he rushed for 107 yards while catching one pass for 40 yards. The freshman running back currently has 624 yards and five touchdowns on the season.

Gibbs is already slated as a top-end first-round pick in rookie drafts next spring. He was a big-time prospect who has demonstrated to be a solid running back prospect throughout his career. He is having his most productive season with Alabama with 771 rushing yards and six touchdowns while also catching 39 balls for 365 yards. Against LSU he rushed for 99 yards while catching eight passes for 64 yards. He’s a very talented receiver out of the backfield which will yield fantasy results at the next level.

Achane is going to get drafted higher than many draft gurus realize. He has the speed and burst to eat chunks of yards on any given play. He’s a dangerous playmaker. On Saturday, we saw him rush for 122 yards and two touchdowns against Florida. He has been productive all season with four games with at least 100 yards rushing.

It looks like Downs is going to finish the season strong after a slower-than-expected start. He has caught 35 passes for 394 yards and three touchdowns in his last three games. We saw him have his best performance of the season in week ten against Virginia, catching 15 balls for 166 yards and one touchdown. Downs will be easily one of the top wide receivers in the 2023 NFL Draft.

Hutchinson is a player not many people are talking about but might be in a lot of conversations when we get to draft season. He has hit the 100-yard mark in four of his last five games and has recorded double-digit receptions in five games this season. Against West Virginia, he caught ten balls for 123 yards and one touchdown. He currently has 953 yards and six touchdowns on the season. We should see him easily surpass the 100-catch and 1,000-yard barriers soon.

It’s important to note that the former four-star recruit had his breakout game last weekend against Cal, catching five balls for 115 yards. As of right now, he’s not considered a top-tier devy prospect, but it’s a name to monitor going forward.

It’s been a lost season for Boutte. He did have a big game against Florida a few weeks ago, but he has come nowhere close to expectations this year. We did see a sign of life on Saturday night when he posted seven catches for 51 yards against Alabama. The talent is still there, it never left. It’s just going to be interesting to see how he is going to be valued this off-season.

Stewart is the freshman wide receiver we need to pay attention to. He is starting to turn it on as he transitions to the college game. This was his fourth productive week in a row. This was his best game of the season as he posted a team-leading eight catches for 120 yards against Florida. The former five-star prospect is currently rising and is increasing his value by the week.

Burden is another top-tier freshman that we need to consistently keep tabs on. We saw him lead the team in receiving against Kentucky, catching six balls for 60 yards. It’s been a slow season with just 245 receiving yards to his name, but he has posted some big plays throughout the season. Burden has talent and should be monitored since he’s still developing and could transition to a big-time prospect if the star aligns for him.

There wasn’t one tight end that surpassed the 100-yard mark in receiving last weekend. Yurosek did lead all right ends with ten targets. Although he has not been hyper-productive, he has hit 23 catches for 200 yards and one touchdown in his last three games.

RELATED VIDEO
Enjoyed this video? If so, please be sure to LIKE this video and SUBSCRIBE to our channel for more awesome, FREE analysis all year long!
Bruce Matson
Contributor at Dynasty League Football
I'm a financial counselor for a hospital in South Central Ohio. I graduated from Muskingum University with a bachelor's in business while minoring in Economics and Accounting. I won my first fantasy football title with Jake Plummer as my quarterback.
Latest posts by Bruce Matson (see all)
Devy Fantasy Football Wrap-Up: Week Ten