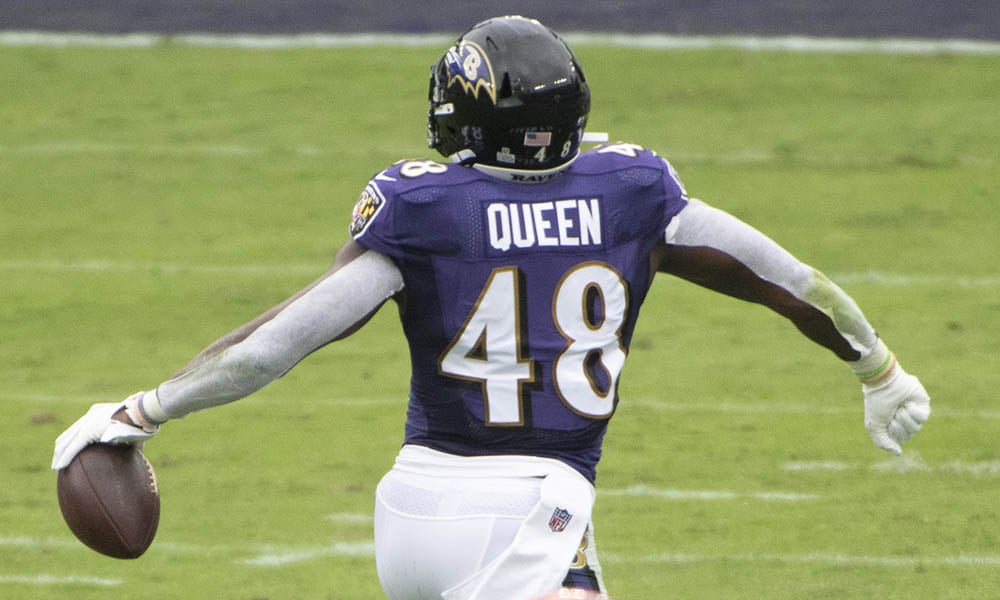 We cover the AFC’s week five IDP snap count data. What did we learn?

With COVID seriously starting to affect the league, there’s plenty of news and changes to aware of this week. It’s also shined a light on just how aware you need to be in 2020. Your league is likely going to be won by the person who adapts and reacts the fastest and best. In IDP, that means being aware of who’s playing and how they’re being used.

Patrick Queen (52) continues to play limited snaps – but it does seem rather like he can just make enough plays anyway. At this point, you just have to start him regardless. LJ Fort played just 25 snaps this week.

Derek Wolfe (33) returned after a week off on the interior. There’s a platoon approach to that unit.

Game moved to Tuesday night due to COVID.

Veteran DE Carlos Dunlap said before the game he would not be starting (and that he was unhappy about it) and he proved correct. He played just 29 snaps with Sam Hubbard (38) and Carl Lawson (40) ahead of him. Lawson has the opportunity we’ve been waiting for as IDP owners.

There was a significant shift at LB as rookie Akeem Davis-Gaither (50) lurched to the fore. Josh Bynes (39), Germaine Pratt (36) and Logan Wilson (30) all continued to play but Davis-Gaither has a chance to grab the top dog position.

Safety Karl Joseph missed the game, so Ronnie Harrison (37) stepped in. He had a big pick six so his owners will be happy – but he also suffered a concussion. Sheldrick Redwine (19) was the next man up.

DT Larry Ogunjobi missed the game which opened up a spot for rookie Jordan Elliott to play. Sadly, he managed just nine snaps. Vincent Taylor (31) was the beneficiary next to Sheldon Richardson (47).

BJ Goodson (47) continues to be the top LB in a group of LBs you do not want to start.

Game postponed due to COVID-19.

LB Benardrick McKinney missed the game so Tyrell Adams (67) stepped up as a starter next to Zach Cunningham (52).

Edge JJ Watt (71) continues to play almost every snap – and he’s playing well. It’s just turning into sacks – similar to his 2019. You still have to start him.

The Colts played significantly more this week than in any other game this season.

Star LB Darius Leonard was out hurt, so Bobby Okereke and Anthony Walker both played every snap.

DeForest Buckner played 67 at DT. It was nice to see him flash some of the elite stamina he showed in his first couple of seasons as a professional. He’d averaged just 47 snaps per week prior to this game.

Edge Al-Quadin Muhammad (37) managed a sack this week but he’s a rotational player. He’s not someone you want to trust most weeks.

Myles Jack missed this week. He’d been having a fantastic season so far. In his absence, Dakota Allen (58) played next to Joe Schobert (57). Neither had great games but playing under 60 snaps will do that.

At corner, CJ Henderson missed the game after getting hurt in week four. DJ Hayden also missed out. This all meant that Tre Herndon (57) and Chris Claybrooks (58) were the outside corners with Sidney Jones (38) in the slot.

Safety Jarrod Wilson (58) returned to full snaps after three games out. Josh Jones (30) was ejected from the game early and Daniel Thomas filled in for him.

LB continues to be a bizarre situation. Damien Wilson (60) led the group this week with Anthony Hitchens (47), Willie Gay (33) and Ben Niemann (25) all seeing significant playing time too. The assumption has always been that gay would win a full-time role at some point – but there’s some doubt now. The Chiefs just don’t really seem interested in any LB playing every down. A year ago, this would have sounded crazy. Now it’s part of a growing trend.

Daniel Sorensen (37) had a fine game at safety, but he’s only third in playing time behind Tyrann Mathieu (70) and Juan Thornhill (69). Sorensen’s role is much more in the box which helps but he’s not reliable.

Maxx Crosby (66) continues to play a heavy load compared to Clelin Ferrell (51) at DE. Crosby has the sacks to go with this – but Ferrell is playing better, has more pressure and double the tackle numbers.

LB Cory Littleton (72) continues to be woefully inefficient but he’s 13th in snaps among LBs. He’s going to have some big days. Nick Kwiatkoski (46) played limited snaps again. He has just 121 snaps in the three games he’s been active. Injuries have certainly been at play, but it’s a worry. Nicholas Morrow (28) shared his job.

We’ve now had four weeks in a row with the Chargers using the same two LBs as every-down players. Kenneth Murray (76) looks a bit like a rookie and Kyzir White (74) is no star but they’re getting the volume we want to see and producing IDP stats.

At safety they also seem settled. Rayshawn Jenkins and Nasir Adderley both played all 76 snaps this week. Jenkins is the box safety and had a big game. Adderley is the free safety and unlikely to be a star.

DE Joey Bosa (28) was banged up in this game. Isaac Rochell (56) played most of the game with Uchenna Nwosu (39) somewhere in the middle. Nwosu has been very productive this season. Emeke Egbule (25) rounded out the group.

The Dolphins traveled all the way to California and gave the 49ers a pasting in their own back yard. 2020 eh?

Miami finally got to play Byron Jones (56) again after missing most of the past three games. He looked rusty, but was still better than rookie Noah Igbinoghene (10). Xavien Howard (54) had a good game on the other side.

Jerome Baker (63) remains the only startable LB, with Elandon Roberts (30) and Kamu Grugier-Hill (37) doing just enough to be traps for the unwary.

On the edge Emmanuel Ogbah (43) and Andrew Van Ginkel (46) both had sacks while Kyle Van Noy (56) continues to play poorly.

Interior lineman Zach Sieler also had a sack from his 44 snaps. He’d averaged 19 snaps a game before this week. Christian Wilkins (37) and Davon Godchaux (26) both lost some playing time but that may have been due to game-script. Rookie Raekwon Davis (11) is still only seeing limited time.

Game postponed due to COVID 19.

LB Avery Williamson (70) finally seemed to seize one of the available jobs and had a fine day next to Neville Hewitt (75). Williamson should be locked in for the rest of 2020 now.

Pierre Desir (75) has become a top IDP corner in recent weeks. The other outside corner this week was Lamar Jackson (75) with Blessuan Austin missing. All Jets corners are pretty startable right now.

The Steelers are the finest pass-rushing defense in the NFL by a clear margin.

The entire defensive front is extremely productive right now. Cameron Heyward (48) and Stephon Tuitt (45) are the top interior linemen with Tyson Alualu (21) in a limited role. TJ Watt (50) and Bud Dupree (55) are tearing it up on the edge.

This makes up for the fact that the linebackers are uninspiring. Devin Bush (59) has just not played well, and Vince Williams (48) has always been limited.

Game moved to Tuesday night due to COVID.

Tom Kislingbury
Contributor at Dynasty League Football
Being from England Tom only discovered American Football in the late 90s. From there he's gone from casual defender to devoted obsessive and likes to delve into deep data primarily about defensive players. He spends his days trying to pretend the spreadsheets and graphs he makes about football are actually work for his day job. No-one is fooled.
Latest posts by Tom Kislingbury (see all)
AFC IDP Snap Counts: Week Five

Thank you for adding the total snaps, really appreciate it!

It was a good idea Manuel.
Thanks