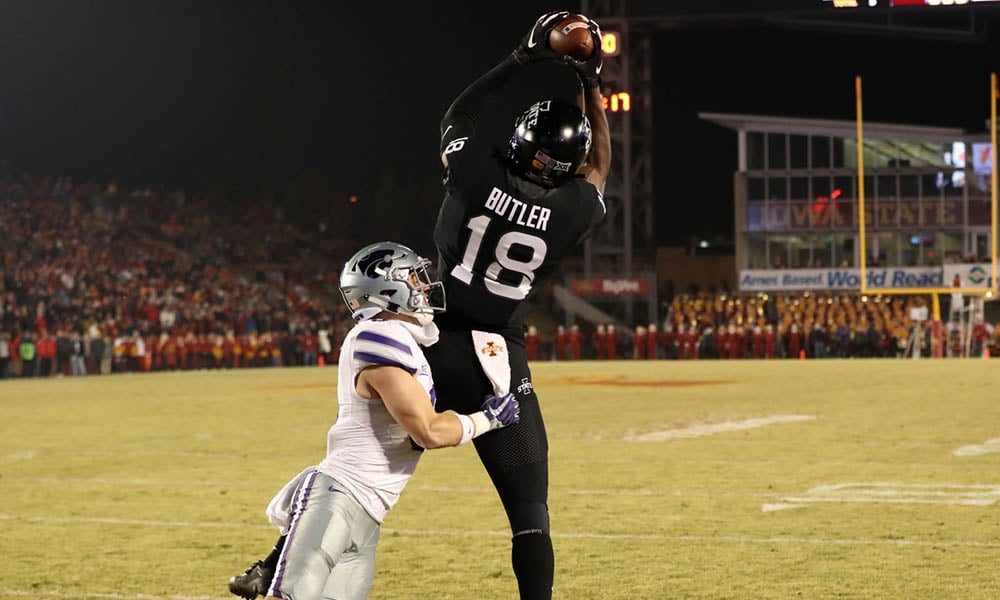 We offer up a DLF staff 2019 rookie mock. Who were our picks in rounds one and two?

The 2019 rookie class is set and I couldn’t wait to get a group of our writers together for some mock drafts. Unlike recent years, there is basically no consensus order, even in the early portion of rookie drafts. Expect every mock draft or set of rookie rankings to be quite different, at least until we learn more information at next month’s NFL Combine. With disagreement comes value and it is never too early to begin tracking the value of your favorite rookies.

Here are the results of the first DLF Rookie Mock Draft of the off-season. The draft was based on a typical 1QB, PPR league.

For most of the past year or more, Arizona State wide receiver Harry has been the presumed favorite to be the top player drafted. Now that draft season has arrived, he is facing loads of competition for the spot. Pete still favors Harry as the top option, although he might not be the first wideout drafted in the NFL Draft.

Leo made Ole Miss ‘freak of nature’ Metcalf the second overall pick. Metcalf has everything you’d want in a wide receiver prospect but also comes with a pair of serious injuries, cutting his freshman and junior season short. Leo noted that a positive Combine report would solidify Metcalf’s lofty standing.

North Carolina State product Harmon is viewed as one of the safest prospects in the class and that could make him a very early pick, as he is here. Nathan makes it three straight receivers with the Harmon selection. Like most of the players in this range, Harmon will be a strong contender for the top spot in dynasty rookie drafts.

I found myself on the clock with the fourth pick in the first round and then realized just how much I liked Iowa State’s Butler. Most have him as a mid-first rounder at this point, but the hype is already building. I won’t be surprised if he ends up in the same group as the other elite wideout prospects.

We finally see the first running back drafted and it is another Iowa State player. For over a year now, Montgomery has been viewed as the top running back prospect, especially in dynasty leagues, though the gap is closing quickly. Jake compared him to Kareem Hunt but admitted he might not test well at the upcoming Combine.

Michael makes Brown the second Mississippi wideout selected, noting that Brown possesses the size and production he typically looks for in a receiver. Michael admits Brown may not have the upside of some of the other top wideouts but should earn a role right away.

The trendy pick of the early portion of the NFL Draft process has certainly been Jacobs, who has been projected as high as top five overall in the NFL Draft. Doug grabs the former Alabama back here and notes he’s the complete package, hence the building hype.

Heading up the second tier of receivers in Stanford’s reliable playmaker Arcega-Whiteside, selected by George. Arcega-Whiteside has been productive, yet under the radar. That might not last much longer though as ESPN recently ranked him as the WR3 in the class.

Memphis back Henderson does a little bit of everything and he does it well. Henderson is likely to be a day two NFL Draft selection and is one of those players pushing Montgomery for the top spot. Travis mentioned that Henderson has unmatched production against Power Five competition and has elite burst, speed and vision.

Hall is the first senior wideout drafted in a class dominated by underclassmen receivers. Serving as Missouri’s deep threat for the past couple of seasons, Hall boasts an impressive 14 yards per target. This might be a bit early for him to be selected in dynasty drafts but I love the pick as it shines a light on an underrated player.

According to recent reports, senior running back Harris has seen his stock take a hit in the latter portion of the season. Obviously, that is tied to the late breakout of his teammate Jacobs. Kyle grabs the solid back, noting Harris lacks the upside of others but is a safe bet at this point of the draft.

In what is expected to be one of the top tight end classes in years, Iowa’s Fant is the current favorite among dynasty players, though he should get some competition from his own college teammate, T.J. Hockenson, for the honor of being the first tight end selected in the NFL Draft.

Singletary is an uber-athletic back who looks like an early steal in the second round. The FAU product has become known for his ability to gain yards after contact. A strong Combine could really answer questions about his speed and boost him into the first round.

Oklahoma’s Anderson would’ve been better off declaring a year ago after he suffered another major injury. Along with an ugly medical record, he’s got some off-field issues in his past as well. If the medical reports look good, he could certainly move into the first-round range.

Another talented, do-it-all back is Williams from A&M. After a breakout freshman season, Williams took a step back in his second season. Williams bounced back this year and is firmly in the mix in the second tier of rookie backs.

I couldn’t resist making a homer pick in the second round, grabbing Kentucky’s productive back Snell. Despite being one of the top rushers in SEC history, Snell is expected to fall to this range of rookie drafts after failing to show he could be an adequate part of a passing game.

Former South Carolina wideout Samuel has had a strong week of work at the Senior Bowl, which could help his value bounce back from an early off-season slide. Samuel should contribute in the return game as well and has a chance to be a first-round NFL Draft pick. If so, expect him to move up the ranks as the off-season continues.

Sanders had a productive year taking over as the starter for all-world back Saquon Barkley. Like most backs in this range, much of Sanders’ value will be determined first by his Combine performance and then by his landing spot on Draft weekend.

As I mentioned earlier, many draftniks consider Iowa’s Hockenson the more complete player in comparison to Fant and others in the class. Hockenson has routinely been projected as a first-round NFL Draft pick. Even if that’s the case, there is little room for growth from this mid-second round range, outside of landing in New England.

As an undersized big-play wideout who also offers exciting production in the return game, Dortch is drawing early comparisons to Chiefs receiver Tyreek Hill. The former Wake Forest receiver is still just 20 years old and was a bit of a surprise addition to the class. He has the potential to turn into a trendy riser as we near the Combine.

Oklahoma’s “Hollywood” Brown is already proving to be a difficult evaluation for both NFL scouts and dynasty players. There is a very wide range in opinions of Brown, who is reportedly “sky-high” on some team’s draft board, while others have knocked him due to his size (5’10”, 166). Regardless, Brown is yet another wideout with a chance of landing in round one.

The big-bodied Humphrey enjoyed a breakout season for the Longhorns and leveraged that into an early declaration for the draft. Despite his 6’4”, 225-pound frame, Humphrey did most of his damage out of the slot, showing toughness and an ability to break free after contact. He’ll need to test well or land in an ideal spot to hang onto this second-round range in dynasty drafts.

The son of former heavyweight champion Evander, Holyfield entered Georgia as a top recruit but failed to ever claim a lead role in the Bulldogs backfield. Considering some of the players who have joined him in the past three seasons, that’s not a real knock. His pedigree is intriguing and will be watched closely at the Combine.

After a huge 2017 season, Oklahoma State’s Hill took a step back last season, partially due to a nagging rib injury. Hill is part of a crowded third tier of running backs and will need to take advantage of his opportunities to stand out or he’s destined to be a day three pick.

Yeah, that was asurprise for sure. It seems that there are a few players who have a wide range of possible draft outcomes and Brown is definitely one of those.

Call me skittish, but TE in the 1st? No thank you. I watched Eric Ebron clown me multiple times (drafting him late 1st, cutting him on the last year of his deal and then going to Indy and making someone else very happy).

Well yeah. TEs take a while to develop. My first year in dynasty I drafted Kelce and Ertz as rookies. Traded kelce after one season and outright dropped ertz.

Oh man that last sentence was a doozy.

Yeah that last sentence is a doozy. Last season, I traded Ebron for Burton…thought that was a good calculated trade after holding Ebron for several seasons…I was tired of missed assignments and dropped balls during Ebron’s time in Detroit…how that work out? Sometimes you just never know in dynasty?

I think we need to start a Support Group! I too bailed on Ebron after last season. Traded him for a pick that eventually got me Christian Kirk. We’ll see what happens.

Haha… yeah I bought Ebron and will never go back to the TE well in the first ever again… and to mention my last minute turnaround to draft Njoku over Kamara [face palm].

Just read these. How about this? In one league I drafted Gronk as a rookie. Three games in it looked clear that Hernandez was the TE to own in NE. And no way could one team support two TEs, right? So I flat out dropped Gronk three games into his rookie season. My worst dynasty move ever.