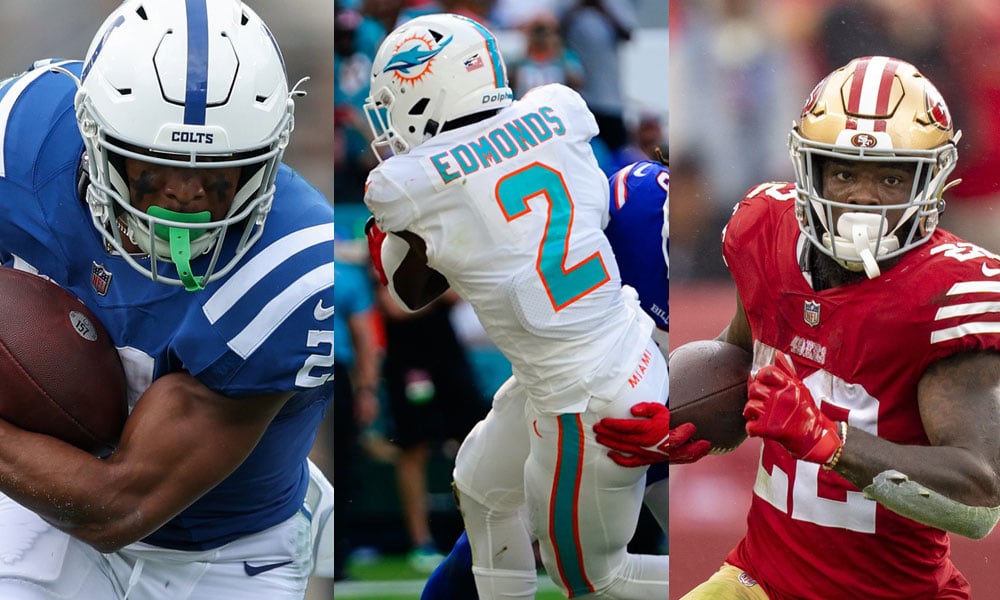 Many dynasty enthusiasts woke up this morning hoping to see running backs like Alvin Kamara, Cam Akers, or Kareem Hunt traded on deadline day. While none of those players found new homes, a surprising number of other running backs did and it really changed the landscape of the position for five different teams. Let’s review all the deals first, then talk dynasty impact.

The Dolphins acquired edge rusher Bradley Chubb and a 2025 fifth-round pick from the Broncos in exchange for Chase Edmonds, a 2024 fourth-round pick, and San Francisco’s 2023 first-round pick.

The Dolphins acquired Jeff Wilson from the 49ers for a 2023 fifth-round pick.

The Bills acquired Nyheim Hines from the Colts for Zack Moss and a 2023 conditional sixth-round pick.

Let’s go through each team involved and re-assess the position.

Miami was rumored to be interested in a number of running backs over the past month or so and settled on basically swapping out Edmonds for Wilson. Edmonds had really fallen out of favor in his first season with the Dolphins and was being used sparingly behind Raheem Mostert over the past few weeks. As for Wilson, he was deemed as expendable by the 49ers after they made the giant move for Christian McCaffrey. The Dolphins depth chart now features ex-49ers in Mostert and Wilson, backed up by last year’s duo of Myles Gaskin and Salvon Ahmed. Together, that’s a decent group. However, it’s not really the best in terms of fantasy production. Wilson will likely slide in behind Mostert and give the Dolphins a good change-of-pace runner and insurance should Mostert get injured. It’s hard to see Wilson taking the starting job from Mostert right away, but stranger things have happened. Ironically, the trade should still help both players in terms of their ADP. Mostert no longer has a highly paid backup nipping at his heels and Wilson wasn’t going to see the field with CMC in San Francisco. Overall, this looks like a better real-life trade than fantasy one, but things could have turned out worse for Wilson. If you didn’t think the Broncos had officially had enough of Melvin Gordon before, you just have to think that now. With Edmonds, Gordon, Latavius Murray, and possibly a returning Mike Boone, this is looking like a crew to completely avoid. If I had to guess, I think Edmonds is going to be the play moving forward. Gordon has obviously worn out his welcome and would likely rather just be cut at the moment, thought it’s doubtful he gets his wish. As for Murray, he always has some nice moments, but he’s no more than a moderately above average running back who is getting very close to running on fumes. Simply put, this backfield is going to be a serious mess in the short-term while Denver waits for Javonte Williams to come back. The Broncos can move on from Edmonds at the beginning of next year and only take a cap hit of a little over $1 million. If they like him, chances are they would restructure his deal. Without an injury or two (and without Denver’s offense finally doing something), it’s going to be hard to trust any of these players in the next few weeks while the dust settles. GM George Paton went on record saying Gordon and Murray are going to be co-starters and Edmonds is seen more as a third down back. Gross. The Bills did a nice job in getting Hines when their likely efforts to land someone a little bigger fell through. Hines had been used sparingly this season, with just 18 carries and 25 catches in seven games. He should mix in nicely with Devin Singletary and James Cook to form a pretty solid committee. As a plus, you have to imagine most of the passing game work should be ceded to Hines, who has proven to be a fine pass catcher in his five-year career. His addition isn’t great news for Devin Singletary, but this isn’t as disastrous as it could have been should the Bills have traded for someone like Alvin Kamara or Kareem Hunt. Hines should still be more of a situational player instead of a replacement. In short, it’s going to be tough to rely on any of these running backs on an offense built around Josh Allen and his elite-level receivers. At least the Bills can block and that’s more than the Colts have been able to do. The trade should result in a bit of an uptick in Hines’ ADP and isn’t great news for James Cook, either. 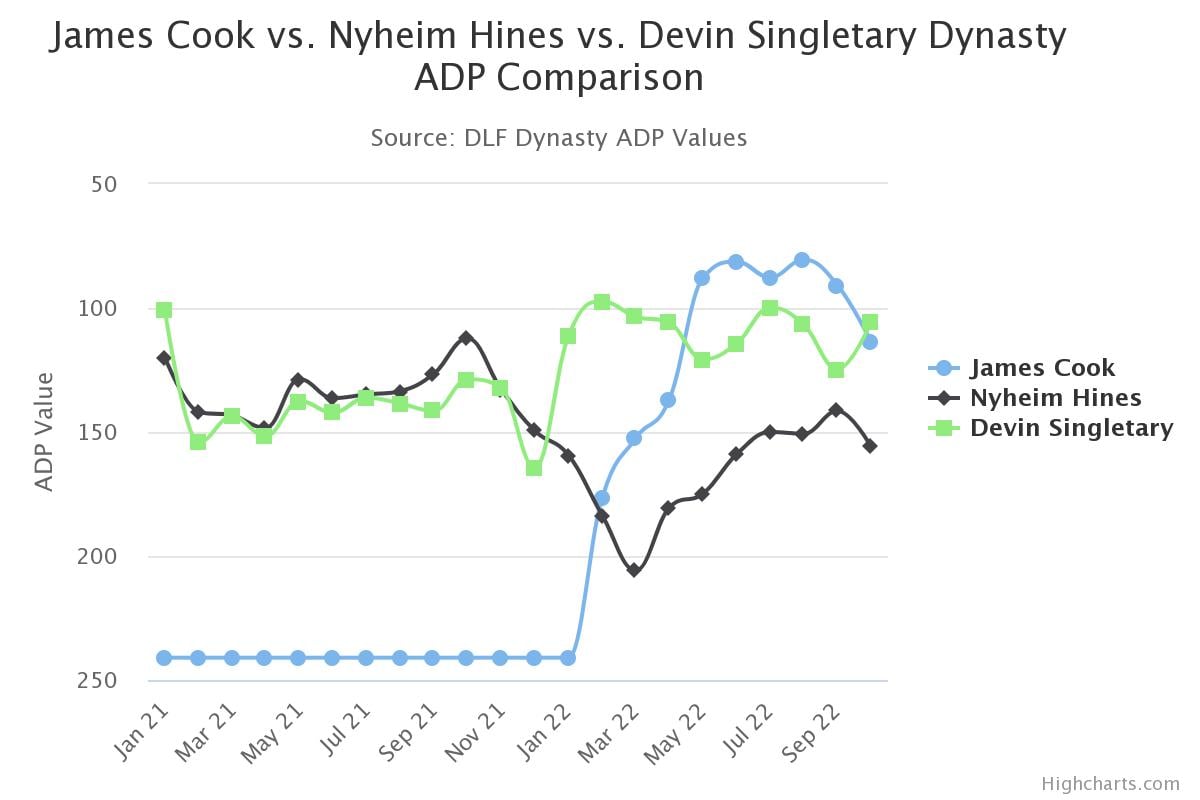 Moss seems like a bit of a throw-in for the Colts, but they’ll take it. The former third round pick just never seemed to fit in with the Bills and now gets a fresh start with the Colts. He’s a much different player than Hines, however. Having Moss on the roster seems like more insurance for a Jonathan Taylor injury than anything else. Moss has one more year left on his rookie contract, then the Colts can decide what they want to do with him. The move of Hines is likely the biggest for Deon Jackson, who has impressed in limited duty this season. Indianapolis clearly believes he can fit the role left by Hines and Jackson is going to likely get weekly playing time now. The Colts are a mess all over the board, but this is one position that actually looks solidified with the trio of Taylor, Jackson, and Moss. The move today has no real impact on Taylor, but the ADP of Jackson and Moss should rise, especially in the case of Jackson. Look, this is Christian McCaffrey’s world at this point and Wilson simply wasn’t needed any longer. Still, this is good news for the likes of Elijah Mitchell, Tyrion Davis-Price and Jordan Mason, all of whom no longer need to deal with Wilson towards the top of the backup depth chart. Mitchell still has the most value (though it was really tanked with the CMC trade). However, TDP and Mason are back on the radar as deep stashes, especially considering the injury history of both McCaffrey and Mitchell.