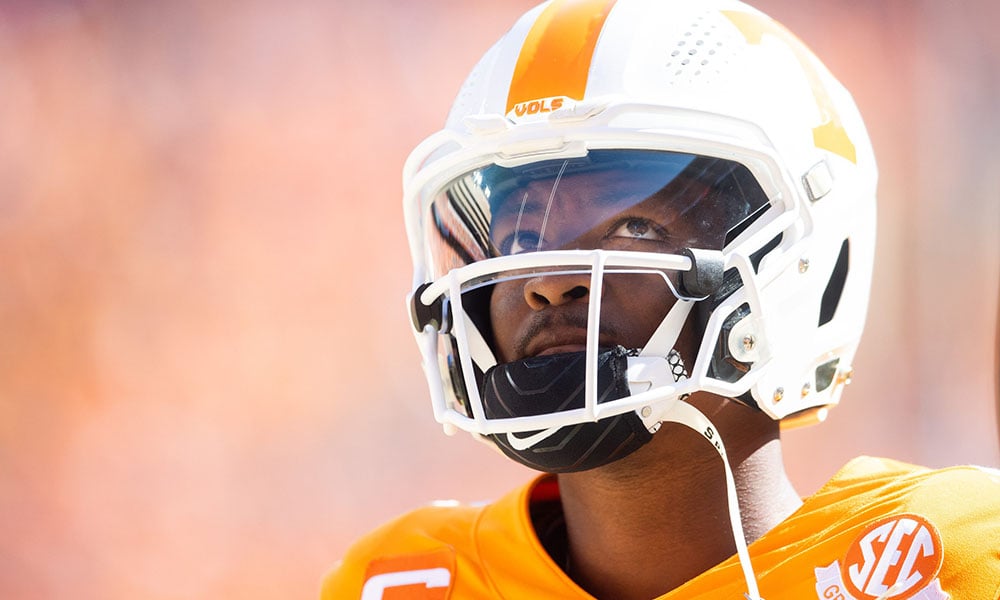 We wrap up the best of the performers from the latest week of college football.

Week seven was packed with action from the noon kick-off to the nightcap games. We saw tight matchups and upsets. The big game that everyone is talking about is Tennessee’s surprise win over Alabama. We also finished our night with Utah taking down USC.

Devy gamers should expect more heated matchups next week as we are deep into conference play. Below are some of the top matchups for week eight.

Young is a very good quarterback prospect. He is going to make his new NFL team very happy once he makes his transition to the next level. We are looking at a quarterback who processes the game very fast and can extend the plays with his mobility while being able to find his receiving targets downfield. It was a tough loss against Tennessee, but he still had his moments. Young completed 35 of his 52 pass attempts for 455 yards and two touchdowns against a juiced-up Tennessee defense.

Hooker is locked in the first round of the 2023 NFL Draft. He made the correct decision of staying an extra year to build his resume. I thought he was very efficient last year, but he’s on another level this season.

Hooker can make big money throws and be efficient. At home on Saturday, in possibly the game of the season, he led Tennessee to an upset 52-49 victory over Alabama. In this contest, he completed 21 of his 30 pass attempts for 385 yards and five touchdowns.

Williams is one of the top quarterback prospects in the nation. His ability to pick up yards on the ground will make him a lucrative fantasy option in the future. In an upset loss to Utah, he completed 25 of his 42 pass attempts for 381 yards and five touchdowns. He also ran eight times for 57 yards. Williams is going to be a top asset in the 2024 NFL Draft.

Rising overcame the odds by leading Utah to a 43-42 victory over USC. He completed 30 of his 44 passes for two touchdowns while also rushing for 60 yards and three touchdowns. The junior quarterback made some big plays that had social media buzzing about his performance.

Tucker should be on everyone’s list for 2023 rookie drafts. He has been a dominant force over the last two seasons and is one of the main reasons why Syracuse has a 6-0 record. Against North Carolina State we saw him rush for 98 yards and one touchdown and catch four passes for 14 yards. He has the size to grind yards between the tackles and the speed to be a threat to score from anywhere on the field. Tucker has the potential to make an instant impact at the NFL level.

When Gray transferred to Oklahoma from Tennessee everyone was expecting big things from him. Against Kansas we got to see him carry the load, rushing for 176 yards and two touchdowns. This was his fourth 100-yard game of the season and he’s currently on pace to surpass the 1,000-yard threshold.

This catch by Bijan Robinson was just unreal yesterday against Iowa State. pic.twitter.com/tAZIHJ8Wgy

Robinson is one of the main reasons why 2023 first-round rookie picks are lucrative. Just holding an extra 2023 first-round rookie pick is a lottery ticket that could lead to him being on your roster. Everything he does this season is just an extra cherry on top because he’s already proven enough to be the top running back prospect. Against Iowa State, he rushed for 135 yards while catching four passes for 36 yards. He’s one of the funniest running backs to watch in college football. His ability to catch the ball out of the backfield makes him a very trendy option for PPR.

The former five-star recruit showed he’s one of the better young talents in college football. He was explosive, rushing for a 67-yard touchdown late in the game. We saw him handle the rock 16 times for 173 yards and two touchdowns in his contest against Penn State. His speed and agility are attributes that make devy gamers excited about his skill set. If he continues to develop, he will be a serious prospect in the 2024 draft class.

Corum has gone from an intriguing running back prospect to a potential top-100 player for next year’s draft. In a tough running back class, he is making his bid to be ranked in the top five. He runs with excellent contact balance while also executing excellent vision and patience. Corum has been on fire lately, rushing for 666 yards and six touchdowns in his last four games.

Brown has been a huge riser this season. He’s going to get some buzz during the draft process this spring. He posted his seventh straight 100-yard rushing performance against Minnesota. He currently has 1,059 yards and four touchdowns on the season. The Fighting Illini have a 6-1 record with Nebraska next on their schedule after their week eight bye.

Allen seems to be the lone wolf on the 3-4 Wisconsin Badgers. Even in tough matchups, he can still be productive. In a 34-28 loss to Michigan State, he carried the ball 29 times for 123 yards and two touchdowns. He also caught three passes for 33 yards. Allen’s size-adjusted speed combined with his production will make him a very desirable asset in the 2024 NFL Draft.

You’re either over the moon about Sanders or you’re just now waking up to him. He has been a monster this season, rushing for over 100 yards in five of his seven games. This week against BYU, he dominated, totaling 179 yards from scrimmage and two touchdowns. The 6-foot-2 and 225-pound back will be another top prospect dynasty gamers will be clamoring for in 2024 rookie drafts.

Gibbs will be one of the top dynasty prospects from the 2023 NFL Draft. He looked very good when he was at Georgia Tech, but with a full workload on the Alabama offense, Gibbs is proving he’s one of the best running backs in the country. Against Tennessee, he rushed for 103 yards and three touchdowns while catching five balls for 48 yards.

His 50-yard run for a touchdown was very impressive. He has been very quiet this season, but his 179-yard performance against Ole Miss might be enough to boost his stock. Throughout his career, he has been garnered as one of the top running back prospects for the 2023 NFL Draft. This class has a lot of competition at the position. He will need to finish the year strong to maximize his draft stock.

What a design for Jaxson Dart and Zach Evans. Looked like QB power all the way until the last second, and it's a walk-in TD. pic.twitter.com/7rI7NLjzNN

The former five-star recruit from the 2020 class will be a hot topic this draft season. Dynasty gamers will be excited about his athleticism when it comes time for the NFL combine. Against Auburn, he posted his third 100-yard game of the season with 136 yards and one touchdown. Ole Miss will have back-to-back road games against LSU and Texas A&M before hosting Alabama.

Quentin Johnston is a MAN pic.twitter.com/Gl35fpw35z

After a slow start to the season, Johnston is starting to ramp up production. Against Oklahoma State, he caught eight balls for 180 yards and one touchdown. There’s a very good chance he gets selected in the first round of the 2023 NFL Draft. He has top-tier athleticism and has made some highlight plays throughout his career. Johnston has a good foundation to his resume, but he needs to finish the season strong to help his case when it comes time for the draft.

The senior wide receiver recorded another big performance over the weekend. In a tight game against Texas, Hutchinson caught ten balls for 154 yards. This was his third straight 100-yard game. He currently has 758 receiving yards on the season with five more regular season games left on the schedule. Hutchinson’s 6-foot-3 frame combined with his production is going to make him an interesting prospect in next year’s draft.

Holmes isn’t considered a top devy prospect but his performance on Saturday deserves to be noted. In a shootout that totaled 83 combined against West Virginia, he caught seven balls for 210 yards and one touchdown. By far this was the most productive game of his career as it was his first time crossing the 100-yard mark during his three seasons at Baylor.

Hyatt showed up in one of the biggest games of the season. He was a major factor in Tennessee’s win over Alabama, catching six balls for 207 yards and five touchdowns. Hyatt proved that he could dominate against top-tier competition. He has 595 yards on the season with two 100-yard performances.

Addison is currently the top wide receiver for the 2023 Draft class. The competition is stiff at the position, but he’s proving he can break out with two different programs while getting Kenny Pickett selected in the first round. In a shootout against Utah, he caught seven passes for 106 yards and one touchdown. He currently owns a 28.51 percent market share of USC’s passing production and that’s with Mario Williams eating a large portion of the passing game.

The sophomore wide receiver is building his portfolio for the 2024 NFL Draft. He keeps making plays and producing. Against Utah, he posted the most electric performance of his career by catching four balls for 145 yards.

Kincaid led the Utes in receiving, catching 16 balls for 234 yards and one touchdown. He has been very productive this season as he leads the team with 558 yards and six touchdowns while owning a 28.44 percent market share of his team’s passing production.

Bruce Matson
Contributor at Dynasty League Football
I'm a financial counselor for a hospital in South Central Ohio. I graduated from Muskingum University with a bachelor's in business while minoring in Economics and Accounting. I won my first fantasy football title with Jake Plummer as my quarterback.
Latest posts by Bruce Matson (see all)
Devy Fantasy Football Wrap-Up: Week Seven