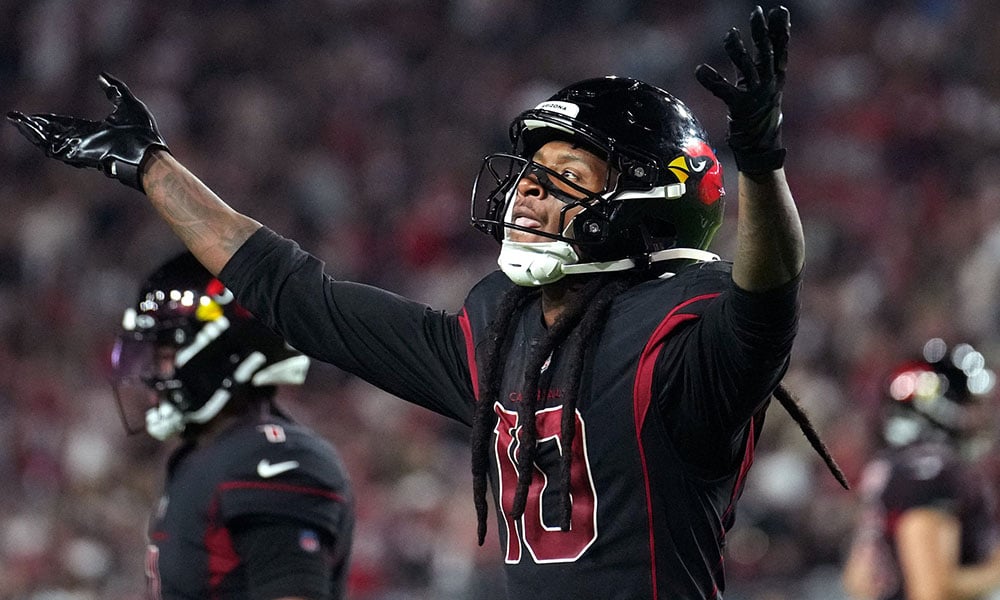 What is are some of the latest dynasty-related tweets that got everyone talking?

Usually, it’s some blockbuster trade or the draft that had this much dynasty news. But not this week as we saw the return of a dynasty stud, and not one but two surprise changes to starting lineups all of which are covered in the tweets below.

DON’T CALL IT A COMEBACK. pic.twitter.com/hHGzyaQ7Mq

It wasn’t that long ago that DeAndre Hopkins was the top dynasty receiver. He routinely topped 100 receptions in a season and averaged a touchdown at least every other game. But 2021 seemed to be the beginning of the end as the then-29-year-old receiver missed the first significant time of his career due to an injury, only appearing in 10 out of 17 games for the Cardinals. Even in the games he played, however, Hopkins looked like he was on the decline, totaling just 42 receptions in those games and averaging just 57 yards per game, the lowest average in a season since his rookie season.

2022 didn’t look to be better as Hopkins was suspended for the first six games of the season. So when the tweet above dropped, it’s hard to know who was happier – the Cardinals or Hopkins dynasty managers. He didn’t disappoint in his debut, totaling 10 receptions for 103 yards. For one night at least, Hopkins was back.

Dynasty Impact: The reports of Hopkins’ demise have been greatly exaggerated if week seven is any indication. He stepped back into the role of top dog in Arizona, dominated snaps, targets, et al. And while he may not command the value of dynasty league’s top receiver anymore, he can still be a valuable piece for a contending team in your league. So if you’re a current Hopkins manager in playoff contention, keep him. He’d be a great piece to trade for future pieces if you’re not in contention. He’s well more than his current 42nd place in our dynasty rankings so don’t let another team try to fleece you.

Usually, injuries are the biggest storylines on Sunday mornings during the NFL season so this news was pretty significant as the Chiefs made official what had been trending since the off-season. Seventh-round rookie Isiah Pacheco was officially named the starter over incumbent Clyde Edwards-Helaire who had been atop the running back depth chart since being drafted in the first round back in 2020. The reasoning behind the change isn’t clear as CEH was running efficiently, with a career average of 4.4 yards per carry in his two-and-a-half season career. But the Chiefs decided to roll out Pacheco first.

After the Chiefs win, if you were to look at the stat sheet, you wouldn’t be able to tell anything was different. Pacheco had eight carries but CEH had six along with a target. Nonetheless, the fact that Pacheco was seeing more first-team snaps and got the ‘official’ start has some ramifications for dynasty leagues.

Dynasty Impact: While the on-field results don’t show it, the symbolic gesture might be the nail in the coffin of CEH’s vaunted dynasty status. When he entered the league, he went first in plenty of rookie drafts. The first-round pedigree combined with his landing spot of Kansas City was seen as a lethal combination of a dynasty running back. And as mentioned above, he’s been efficient. There are just not enough footballs to go around the Chiefs’ offense, at least when it comes to the run game. His rookie season was his peak usage, seeing 181 carries in 13 games. He was injured for nearly half the season in 2021 and only saw 119 carries. 2022 looks to continue that trend, recording just one game with more than nine carries. His dynasty value hasn’t been impacted yet, but it will.

For CEH managers, it’s not the end of the world. Sure, CEH won’t single-handedly be winning your dynasty league. But he can still be a valuable piece, especially for deeper starting lineups and rosters. Don’t trade him just yet unless someone blows you away.

Talk about a stunner. Despite Colts quarterback Matt Ryan admittedly not playing well this season, it still comes as a surprise that the Colts are pulling the plug this soon. After all, they just traded for Ryan this past off-season and the Colts sit at 3-3-1 almost halfway through the season.

Of course, if you just looked at Ryan’s fantasy stats this season, it probably isn’t a surprise. He’s already up to nine interceptions through seven games this season and but only nine touchdowns. The Colts offense, led by Ryan, is bottom five when it comes to points per game.

So now the Colts turn the keys over to second-year quarterback Sam Ehlinger. A sixth-round pick in 2021 from Texas, Ehlinger didn’t record a pass attempt in three appearances in his rookie season and rushed just three times for nine yards.

For dynasty managers, the question of whether Sam Ehlinger is worth their time is not a hard one. The chances of Ehlinger becoming a viable fantasy contributor are slim. No, the bigger question is how this will affect the dynasty studs-in-waiting in the Colts’ offense including running back Jonathan Taylor and Michael Pittman.

Dynasty Impact: Welp. Only a year after Taylor seemingly climbed to the top of dynasty rankings, his value is in flux as he has yet another quarterback joining him in the backfield with the very real prospect that another one will join next season.

Luckily, he’s still seeing the same volume as before, averaging 18 carries per game which is not far off from the 19.5 he averaged last year. He’s just not nearly as effective, averaging just over four yards per carry compared to his 5.5 average in 2021. And perhaps most disappointedly, he’s scored just one time this season compared to his 18 touchdowns last year.

Pittman dynasty managers could claim to be even more frustrated. 2022 was supposed to be Pittman’s ascension to elite status after totaling 1,082 yards in his sophomore season and his ADP was on a rocket.

Now, Taylor and Pittman dynasty manager will have to wait with bated breath to see what the Ehlinger effect is on their production this season and if it’ll result in another shakeup next season.

RELATED VIDEO
Enjoyed this video? If so, please be sure to LIKE this video and SUBSCRIBE to our channel for more awesome, FREE analysis all year long!
Michael Moore
Contributor at Dynasty League Football
Michael has played fantasy football for over 20 years when his mom funded his first team in the fourth grade. He’s contributed to various fantasy football publications and most recently spent five years writing for the Fantasy side of things at Pro Football Focus.
Latest posts by Michael Moore (see all)
Dynasty Twitter Observations: DeAndre Hopkins Returns, Isiah Pacheco the Starter?