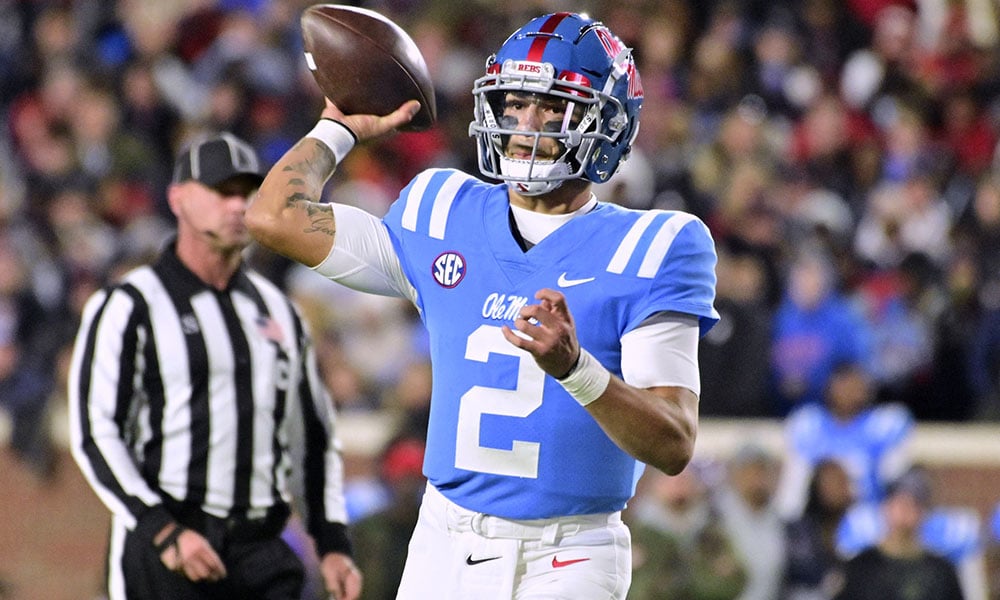 Welcome to Monday Mocks, where I’ll bring you a… you guessed it, a new mock draft every Monday during the off-season. In my opinion, drafting is the best part of fantasy football, so I do as much of that as I can. This series will be filled with all types of mocks. We’ll draft startups, rookies, devys and more.

With the dynasty off-season in full swing and all dynasty managers turning their collective attention towards the 2022 rookie class, let’s begin there.

I asked our team here at DLF to jump into an impromptu weekend superflex rookie mock draft. Here are the results:

While there may not be a consensus 1.01 rookie pick yet, Ole Miss quarterback Corral is the closest thing we have, at least in the superflex format. He has a big arm but it may be his rushing ability that sets him apart from several other quarterbacks in this class. Showing improvement through each of his three college seasons and certain to be a day one NFL Draft pick, Corral is the strong favorite to be the top pick in superflex rookie drafts.

Years ago, dynasty managers routinely fell in love with the biggest, strongest, fastest rookie receivers. Sometimes that worked out, many other times it did not. Burks is another wideout in that same mold. You’ll certainly hear him referred to as a “size/speed freak.” After all, Burks stands at 6’3”, weighs 230 pounds and is rumored to run a sub-4.4-second 40-yard dash.

This class has already been tabbed as a poor collection of running backs but that shouldn’t be considered as a knock on Hall. The Iowa State product has done everything to prove his worth in his three college seasons. Often, and perhaps lazily, compared to former Cyclones back David Montgomery, Hall can do it all. He has been especially impressive as a pass-catcher, showing elite burst and agility.

If Burks is not the dynasty rookie WR1, that title will likely be claimed by one of three former Ohio State wideouts who could be first-round NFL Draft picks. Wilson is the former WR2 in his high school class and was an immediate contributor for the Buckeyes. He possesses elite athleticism and ball skills and has become known for his ability to add yards after the catch. He’s a possible top-15 pick in the NFL Draft.

A supremely talented and productive runner, Spiller made a quick impact when he arrived on campus at Texas A&M. He put up over 1,100 yards in each of his three college seasons. A big frame (6’1”, 225 pounds) turns him into a strong downhill runner when he gets free but also limits his elusiveness. Some consider Spiller the RB1 in this rookie class, though he seems likely to settle into the second spot, as he was in this mock draft.

I was starting to wonder if my co-workers noticed the superflex settings of our mock draft as Corral was the only signal caller selected in the top-five picks. Ultimately, I think this group of quarterbacks falling to the middle of the first round is simply due to the uncertainty in how the NFL will value these players. Pickett is a hot name in the NFL mock draft world, coming off a Heisman finalist season. It’s his first four years of mediocrity that has some dynasty managers unsure of his future.

Howell is the complete opposite. Always considered a top draft prospect as well as a dynasty asset, Howell is perhaps the safest pick a dynasty manager can make among the rookie quarterbacks. After losing the majority of his play-making teammates after last season, he changed his game. While his passing efficiency declined, his running game thrived. That versatility should be viewed as a positive for both NFL teams and dynasty managers. I feel confident in projecting Howell to finish with an ADP much higher than this mid-round range.

Viewed as the wild card of the NFL Draft, at least at the quarterback position, Willis has that rushing upside and overall playmaking skill that has become such hot commodities. While Willis does have a cannon for an arm and the speed to match any quarterback in the league, he also routinely makes poor decisions as a passer. He tossed 12 interceptions this season and that could ultimately push him down NFL Draft boards.

No running back helped himself more in 2021 than Kenneth Walker III. After two ho-hum seasons at Wake Forest, Walker moved to Michigan State and his true talents began to shine. He failed to crack 600 rushing yards in either season with the Demon Deacons before racking up over 1,600 yards on the ground and 18 scores in his breakout junior season. Walker will have to prove he can be an asset in the passing game to improve his dynasty stock as he caught just 19 passes in three collegiate seasons.

His former coach once compared him to Mike Evans and that might be all you need to know about London. With Amon-Ra St. Brown off to the NFL, London stepped up as the top option for USC this season and was on a total tear before suffering an ankle injury that ended his season after nine games. Even with the injury, he still has a strong chance to be selected in round one of the NFL Draft and is looking like a steal in this range of rookie drafts.

The wide receiver version of Walker III, Robinson made the most of his transfer, moving back home to Kentucky after two seasons playing for Nebraska. The main purpose of the switch was to play exclusively at wide receiver and Robinson shined in that role, racking up over 1,300 yards on 104 receptions. Robinson’s versatility could make him a favorite among NFL scouts and he’s the type of player who gets drafted much higher than the fantasy community expected.

A rock-steady producer, Bell set new career-highs this season with 93 catches for nearly 1,300 yards. Some will question Bell’s athleticism and upside, which is fair but it always stood out to me that his best games where against the top teams on Purdue’s schedule. Scouts will see that, too. Bell seems like a lock to be drafted early on day two of the NFL Draft.

Even after a torn ACL in the National Title game, Williams still opted to declare for the NFL Draft. That was a wise decision as he should still be a first-round pick and could even be the top receiver selected, despite the injury. Williams enjoyed a breakout season for the Tide after transferring from Ohio State.

Williams is one of the more underrated backs in the class. The elusive back totaled over 1,300 yards in each of the past two seasons and showed off his pass-catching chops with an average of 38 receptions and 336 yards per year. Williams may lack big-time upside but will be a nice value in the second-round of rookie drafts.

There comes a time in superflex drafts where dynasty managers feel compelled to take a chance on second or third-tier quarterbacks and here we are. Strong has a huge arm but adds nothing as a runner. That is likely due to a concerning history of multiple knee injuries. I expect him to be a day two NFL Draft pick.

Pickens is yet another player whose upside has been damaged by injury. Once considered the potential top pick in his rookie class, he has been slowed by an ACL injury. His elite freshman season showed us what Pickens could do and he’s worth a pick in this range of rookie drafts to find if he can regain that status.

Many were surprised when Olave opted to go back to Ohio State following last season. While Wilson became the alpha wideout for the Buckeyes and underclassman Jaxon Smith-Njigba dominated late in the year, Olave’s final college season was… fine. While he may have hurt his dynasty stock by sticking in school, the slender Olave could still slide into the latter portion of day one, which would boost his stock in dynasty rookie drafts.

A four-year player for the Nittany Lions, Dotson showed steady improvement throughout his career and now has created some first-round buzz. Dotson is slightly undersized at 5’11 and 184 pounds but was always able to create separation among defenders. Dotson has also shown a knack for hauling in deep balls, despite not being known for elite speed.

The Cincinnati Bearcats and quarterback Desmond Ridder were among the top stories of the college football season as they crashed the college football playoffs. Ridder showed improvement in his final college season, especially when it came to deep balls. Opinions seem split on him. Scouts seem to love Ridder, often locking him in as a first-round pick in the NFL Draft, while the fantasy community has their doubts. We should know more after next month’s Senior Bowl.

A weak running back class will ultimately result in average prospects getting pushed up the draft board due to scarcity at the position. Allgeier is a solid prospect but the type of player who would show up in the third or even fourth-round of rookie drafts in most years. Allgeier was able to prove that his 2020 numbers (playing alongside current Jets quarterback Zach Wilson) weren’t a fluke as he finished with over 1,600 rushing yards and 23 scores.

White is quickly becoming one of my favorite prospects to watch in this class, making me regret that I didn’t appreciate his game earlier. He has the upside that all dynasty managers chase as he averaged over 40 receiving yards per game and still hit the 1,000-yard mark as a runner.

Just like the other three key fantasy football positions, there is no clear top option at the tight end position. Wydermyer is one of the contenders and has been a consistent producer for the Aggies. He is not the freak athlete that dynasty managers are often drawn to, which could eventually push him down into the third-round range of rookie drafts.

Once viewed as a lock to be among the top players in his rookie class, a neck injury wrecked Ross’s college career. He simply hasn’t been the same since the injury that nearly forced him to retire from the game. He also suffered a late-season foot injury that cost him playing time.

Little-known wideout Tolbert capped his South Alabama career with his best season, posting an 82-1,474-8 season, all of which represented new career-highs. He is a big-bodied pass-catcher with above-average speed. Tolbert could get a boost from Combine testing and move up in the second-round of rookie drafts.

Monday Mocks is a great way to start the week. Excellent news!

Please keep the mocks coming. I’m way more uninformed about this year’s class than usual, mostly due to the lack of starpower at the top. Your analysis is required reading for me.

Charbonnet not declaring was a major bummer. He could’ve been a top 4 rookie pick with a solid combine and landing spot.

Yeah, I was disappointed with that one too.

Just makes the 2023 class even better.