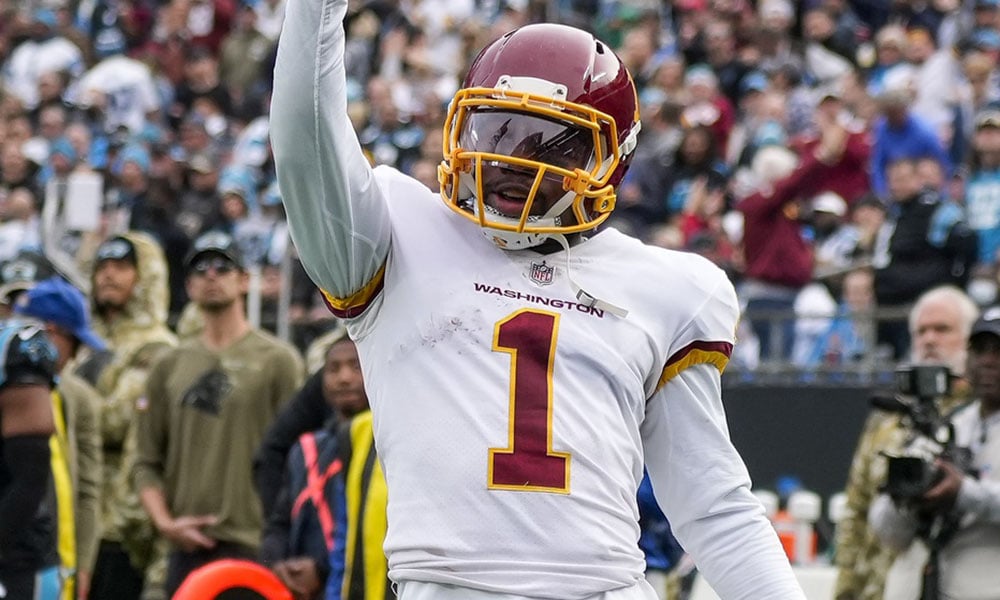 We pick out some top potentially-available targets on the waiver wire after week 11.

Hey, before you go any further, please take a moment to subscribe to the DLF YouTube channel! Thanks to all of you, we just surpassed 4,000 subscribers on Sunday! Now, we begin the path to 5,000! So if you are not subscribed and would like MORE FREE content from the DLF team, the YouTube channel is the way to go! I won’t stop promoting the channel in this introduction until we hit 5K, so either subscribe to help the cause or stop reading these introductions.

In case you are reading this, there is one bit of information to know before you start reading names. Just like last year’s series, we will be utilizing player rostership percentages, courtesy of dynasty rosters from SafeLeagues and the great Scott Fish. Using that data, I developed an app to view rostership data from over 600 SafeLeagues dynasty leagues, all using the same format and scoring (2 PPR tight end premium). While this may not be entirely accurate for every individual league, it is very reflective of how managers view who is worthy or not of a roster spot. Now that that is covered, let’s dive into the waiver wire after week 11! The Seattle Seahawks have strangely looked terrible since Russell Wilson’s return last week, but if there is any takeaway from this week’s game it’s this: give Dallas a chance. Late last week, we got the news that Chris Carson was having season-ending neck surgery, which should have solidified Alex Collins as the next man up for the remainder of the season. However, he has been subpar with the work he has been given as the starter for over a month and the Seahawks should know who Collins is. Rashaad Penny also can’t stay on the field, after leaving the game after his first carry this week too.

Enter Dallas, who had 25 yards on four carries and also scored the only touchdown of the day for Seattle. Dallas was the Seahawks’ fourth-round pick last year and it’s about time they give him a shot to see what he can do in the NFL, especially in a lost season now at 3-7. C’mon Seattle.

I am about done trying to predict who and what the Tennessee Titans are without Derrick Henry and Julio Jones (and AJ Brown to some extent). After two weeks of the Adrian Peterson/D’Onta Foreman split backfield, the Titans decided to throw Hilliard in the mix as well just to mess everything up. He did, however, have a strong game for fantasy, with 16.2 PPR points on the back of eight receptions on ten targets, and was also the most efficient runner on the team this week as well.

Hilliard was 100% just filling the Jeremy McNichols role this week while McNichols is in the concussion protocol. It’s very probably that he goes back to the bench or even the practice squad when McNichols returns, but I still think he is worth a stash as a PPR back with known production on the Titans.

Like I said above, the inner machinations of the Titan’s receivers are an enigma. Because the Titans surprisingly had to throw all game to try to beat the Texans, Brown was in and out of the game, and Marcus Johnson left injured, Westbrook-Ikhine returned to the spotlight with seven receptions for 107 yards on eight targets. I honestly cannot tell you if this is going to stick or not this time, but at over 70% availability in dynasty leagues, Westbrook-Ikhine is worth a dart throw again.

I have actually enjoyed the little Carter rollercoaster we have been on for three weeks now, as he has caught a touchdown and surpassed 10 PPR points in each of the past three games. He has run a decent number of snaps and seen solid targets in a handful of games this year and has become a trustworthy target for Taylor Heinicke behind Terry McLaurin. I am surprised he is still available in 70% of leagues like Westbrook-Ikhine, and I would prioritize him over Westbrook-Ikhine if you have that decision.

This Browns passing game is super weak right now, but that leaves plenty of opportunity for Higgins to slide into a similar role as he had to end last year. With no Odell Beckham and Jarvis Landry continually re-aggravating the same knee injury, Higgins could find himself as the team’s WR1 for a couple of weeks as we start to close 2021. He produced in a similar role last year without OBJ, averaging eight targets, 5.3 receptions, 80 receiving yards, and 0.7 touchdowns per game from Weeks 13-15 last year. Rostered in only 69% (nice) of dynasty leagues, Higgins is definitely worth a stash from here on out.

Similar to Higgins, Wilson could be seeing an increased role on Thanksgiving, with Amari Cooper set to miss with COVID, and CeeDee Lamb potentially still dealing with the concussion he received this week against the Chiefs. Wilson saw seven targets this week in his increased role and was the clear WR2 behind Michael Gallup. Depending on the Cowboy’s receiver room against the Raiders on Thursday, it’s very possible that Wilson could go directly from the waiver wire to your starting lineup.

Ditto! Glad to know I’m not the only immature teenager in a Dad bod.