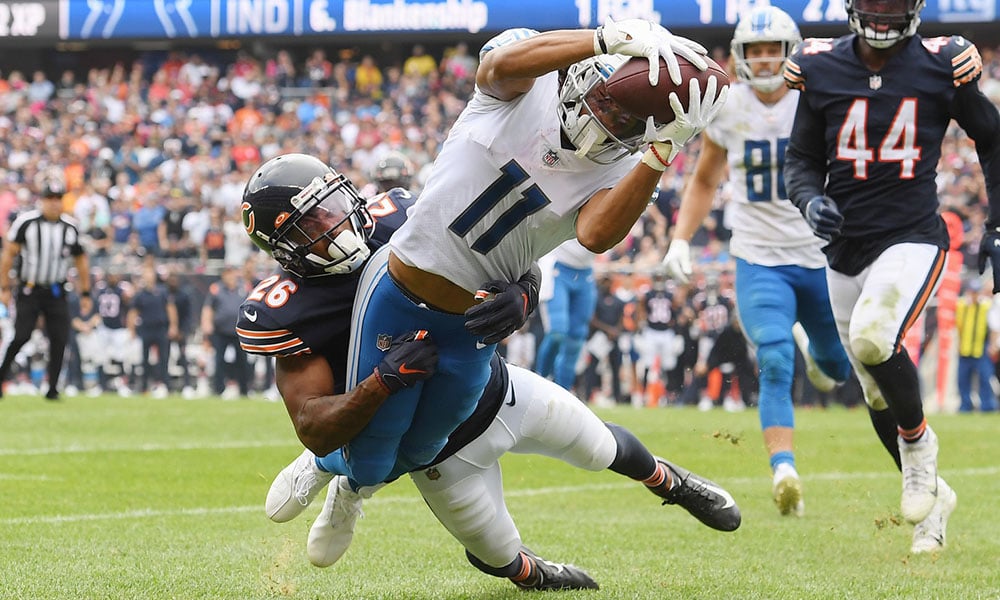 We examine a few players who stepped up this week and may be available to pick up in your dynasty leagues.

In case you are reading this, there is one bit of information to know before you start reading names. Just like last year’s series, we will be utilizing player rostership percentages, courtesy of dynasty rosters from SafeLeagues and the great Scott Fish. Using that data, I developed an app to view rostership data from over 600 SafeLeagues dynasty leagues, all using the same format and scoring (2 PPR tight end premium). While this may not be entirely accurate for every individual league, it is very reflective of how managers view who is worthy or not of a roster spot. Now that that is covered, let’s dive into the waiver wire after week seven! What a weird year for Sam Darnold and the Carolina Panthers. After starting super hot and putting Adam Gase behind him, Darnold has reverted back to his New York Jets form over the last three weeks. It got so bad this week, that he was benched for XLF MVP Walker. Granted, Walker only completed three passes on 14 attempts, but if he starts vying for the starting job over Darnold, a starting QB is valuable in superflex leagues, so he needs to be added. Walker also offers solid rushing upside as a mobile quarterback, too, so there’s that.

I understand that Freeman only had four carries for 14 yards and Bell did no better on five carries, but both of them are still worth additions on the back of your rosters. Despite the Ravens throwing more per game this year than last (mostly by necessity), this is still a run-first team. The platoon of backs they have played every week does not inspire much confidence in any of them individually, but as we saw in week six, they can each be valuable in the same game in big wins.

The Ravens’ schedule gets really nice over the next few weeks. They play at home against the Vikings, then in Miami, then in Chicago. I would expect them to be heavy favorites in each matchup, and as the bye weeks continue to hammer your rosters, you might need a Freeman or Bell in a quick spot start one of those weeks.

I highlighted Pettis in last week’s article and to my surprise, he was only added in about 15% of dynasty leagues. I get it, it’s Dante Pettis, but he has become necessary to this Giants passing game, especially without Sterling Shepard, to the point where he’s not a bad play, and wasn’t this week with a 14.9 PPR point performance. As the Giants continue to cycle through their remaining healthy wide receivers, Pettis could continue being necessary for both the Giants and our fantasy rosters.

Another player I have highlighted in this article before, Raymond had a DAY with six receptions for 115 yards on eight targets. Like Pettis, Raymond has also become extremely important for his team because of injuries and a lack of receiving options. What was even stranger was the disappearing act by Amon-Ra St. Brown this week, to the point where I actually checked to see if I missed him getting hurt or being inactive for some reason, but no, he just wasn’t targeted. The Lions are in desperate need of receivers that every news article about them recently has rumors of trading for a wide receiver. Until that happens, Raymond is the WR1a or 1b and his raw targets will make him a flex option on a weekly basis.

Perhaps this is more of a stash play, but based on his 61% rostership percentage, it seems like everyone has been stashing him already (including myself). After catching a touchdown two weeks ago and passing 50 yards last week, Pringle saw six targets and led the Chiefs in receiving yards against the Titans. The WR2 on this team has been a platoon of guys of the last couple of years, much like Green Bay, but if Patrick Mahomes can hone in on one guy, he would be very valuable for fantasy. Unlike Raymond and Pettis, I would not have a ton of confidence playing Pringle in your flex, so if that is what you need, look elsewhere. Pringle is more of a “find out what you have” stash on the hope that Mahomes starts favoring him over Mecole Hardman rest of season.

Chalk another up for backup tight ends producing for fantasy. After Darren Waller was a gameday scratch, Moreau came to the rescue to the tune of 6-60-1 and a nice 18-point PPR performance. He slid right into the Waller role, finishing second on the team in targets, first in receiving yards, and, of course, finding the end zone that has plagued Waller managers for more than just this season. Unfortunately, the Raiders are on a bye next week, so not only will you not get to play Moreau next week, but that also means Waller will most likely be back in week nine, sending Moreau back to the bench. However, if you have room on your roster, he is definitely worth an add in case Waller misses more time, since we know how dependent Derek Carr and the Raiders offense is on the tight end position.

Other players to keep an eye on:

Herbert or Johnson? Both available.

Khalil Herbert if its not too late!

That’s who I went with. Thanks for the reply though!