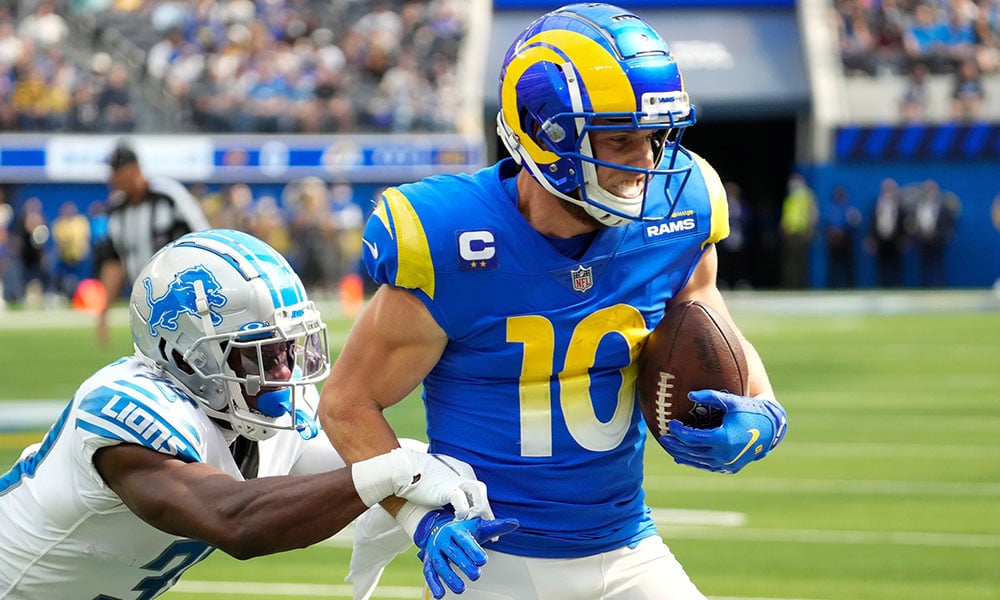 We examine some players with fluctuating dynasty values this week.

Another week is in the books, and things are hurtling toward the season’s stretch run. It may begin to feel like your rosters are locked in place, but it is always critical to be looking to improve right up until your trade deadline.

Schultz was one of the biggest surprises last season and, as a result, saw his dynasty value skyrocket. This season he started slowly, primarily down to the lingering PCL injury he suffered in week two. However, that injury has now had time to recover, and we have started to see Schultz put together an impressive run of fantasy production. He has produced back-to-back performances of over 12 fantasy points, having not yet hit that mark since week one.

The tight end landscape is somewhat of a wasteland outside the top two difference-makers. If Schultz can continue to see the 15-20% target share he has had the last two weeks, it could help address the gap if you do not currently roster one of the top two options.

Because of the slow start, Schultz could be slightly undervalued currently, and you may be able to tempt him away for around a second-round pick in value. At this point, his upside as the number two option in a potentially improving Dallas offense is well worth the investment and could reap enormous rewards for the stretch run.

By now, hopefully, you realize that I like to acquire consensus sells where I feel there is an opportunity to gain an advantage. Because of his situation, Wilson feels replaceable as an asset in the Miami backfield. Because of that, people aren’t placing much value on him long-term and are potentially looking to cash out on Wilson before the season finishes, and his value evaporates.

However, while the majority of that is true, Wilson has the potential to offer incredible value down the stretch run as an RB2/flex type who could win you weeks. The Miami offense leads the league in EPA per play if you only consider games in which Tua Tagovailoa has started and finished. This offense is built to put up points and do it in a hurry. And the starting running back on that offense will be a desirable fantasy asset. Since Arriving in Miami, Wilson has point totals of 16.2 and 22.3. He has out-touched Raheem Mostert in both games, and it looks like that trend will only continue moving forward. How many players with that potential can be acquired for as little as a second-round pick?

He may only be available in some leagues as owners may realize that his likely production will outweigh his current value. However, if you can convince the current Wilson owner that they’re selling high on the impending free agent, you could add a fantastic piece for the stretch run at a bargain price.

This has the potential to blow up entirely in my face. Kupp has just come off the most impressive stretch of consistency we have ever seen at the wide receiver position. He scored over 15 PPR points in 22 straight matchups. No other wide receiver has done that in more than 17 games since the 1970 merger! Since Matthew Stafford arrived in Los Angeles, Kupp has been an absolute fantasy cheat code. On Sunday, he suffered what appeared to be a gruesome ankle injury that should hold him out for several weeks. There is a chance Kupp’s season of fantasy relevancy is done, as the Rams are already out of playoff contention and will probably not want to rush him back and risk further injury with so little to play for.

Looking ahead to the off-season, Kupp will be 30 years old, and despite his recent production, his value is only heading in one direction. It is absolutely within the range of outcomes that he will head toward a WR2 in ADP rather than the current top-five player at the position he is being held up as. If you’re purely looking to sell at the final peak value, now is the time to act and hope that people have yet to discount his value due to the injury too much. You can even dress up the reason for selling as the injury rather than the impending value drop as we get into the off-season. I’d likely accept a mid-2023 first with a small additional asset, or I would pivot to any of the other younger, potentially elite receivers like Chris Olave, Drake London, Garrett Wilson, Tee Higgins or Amon-Ra St. Brown.

You may not like making a move like this, but unless you want to be left holding a depreciating asset, it could be no or never to sell for good value.

In an earlier edition of this series, I suggested Ridder as a buy candidate. I was a month or so early because the Falcons have continued to win games and start Marcus Mariota. However, the end of the Falcons’ season is drawing nearer, and at some point, they will surely hand the keys to Ridder to establish if he is a potential placeholder before heading into the off-season. If you can acquire him for a second-round pick in your superflex leagues, he could easily double in value the second he starts games.

Richard Cooling
Contributor at Dynasty League Football
Richard is a despondent Jets fan from the UK. He is a value obsessive and believes in trading any player if the value is there. He aims to combine statistics and film study to provide well thought and researched opinions. When he's not thinking about player values Richard spends his time at the beach with his wife and two sons.
Latest posts by Richard Cooling (see all)
Dynasty Fantasy Football Trades

Just traded Kupp this morning for Drake London. It’s a risky move as a contender, but I don’t see Kupp playing again this season and it’s a trade I doubt I could make in the off-season.

I love this trade longterm. Yeah you could potentially have got a better win now piece but you’ve got a stud for several years now!