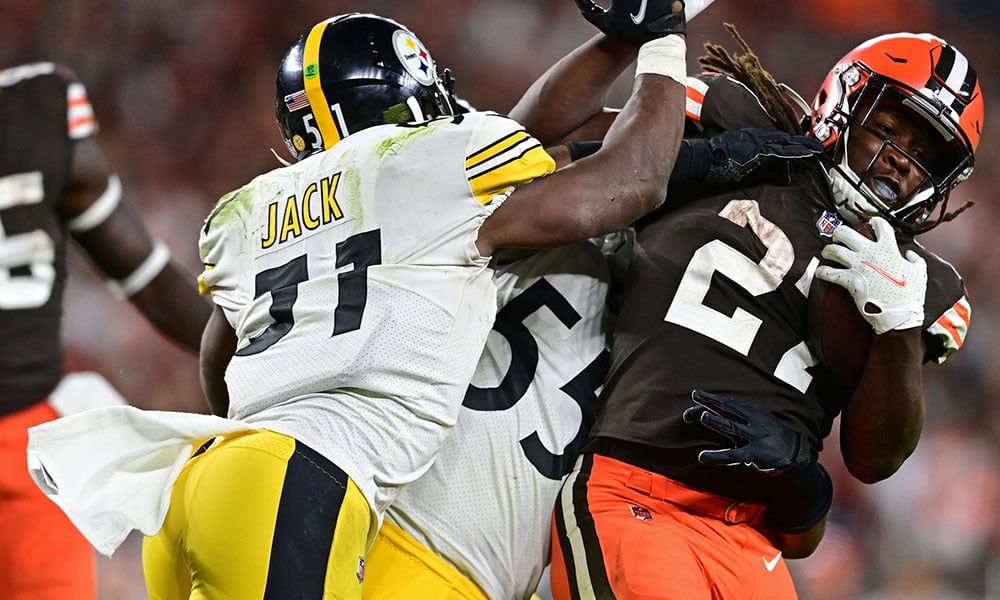 Tom Kislingbury picks out some of the more intriguing IDP stats three weeks into the season.

We resume our weekly look at which IDP numbers you need to be aware of to make the best decisions you can make.

1. Myles Jack has 40 total tackles in three games, and a tackle efficiency of almost 19%

Jack leads all linebackers in volume through three games. This has a lot to do with the Steelers leading all teams in total defensive snaps so far, due to playing a 100-snap overtime game in week one.

He has never been an efficient tackler, though. His highest season efficiency figure was 12.6% back in 2020, and his average is just 10.2%. High tackle efficiency is not a player-owned stat, but low ones can be. It is rising over time for LBs (due to evolving coverages), but still, for Jack to be touching 19% is wild. To put it into context, he’s currently making tackles at a higher rate than Chris Borland did in his sole, incredible season.

Jack’s high watermark for tackles is 117 (again in 2020). At his current rate, he’ll reach that in week nine. That is extremely unlikely to happen, of course. The Steelers are likely to play less, we can expect natural regression, and injury is a large, ever-present risk. But right now, Jack is tearing it up. He is a brilliant reminder that the smart play is to invest in LBs we know are likely to play a lot, but are not valued as elite assets.

2. Micah Parsons has played edge for 75% of his season so far

Last season, it was around 41%. It was down at around 25% if we exclude the games where he was used as a full-time edge rusher due to injuries. That’s a bit disingenuous, but even so; 41% to 75% is a huge leap.

The reason you should care is that it has a direct impact on his productivity as an IDP. Parsons leads all NFL defenders in 2022 with an outstanding 19 pressures, and he’s converted four into sacks (that’s an average rate). But he has recorded just four solo tackles and two assists so far (as measured by Pro Football Focus). That’s the same number as Jalyn Armour-Davis, the Ravens’ backup cornerback. Cory Littleton has more tackles than Parsons so far, and he’s only played 52 snaps.

The Ravens’ defense is off to another shaky start. After a disappointing 2021, the days of them fielding a top defense every season feel like a long time ago. Sure, they’ve had injuries, but all teams do. Right now, the defensive roster is just not as well-built as it was in the past, which makes any injuries more impactful.

Oweh has been forced to play more than ideal due to injury. In three games, he’s seen 183 snaps. He played 615 snaps in his entire rookie (regular) season and that sort of volume generally does not make pass rushers look great. Teams are rotating edges so much these days precisely because players tend to be more productive at 100% on fewer reps.

Oweh created pressure on nearly 12% of his pass rush snaps as a rookie. In 2022 he’s hitting just 9%. That’s significant in the pass-rush world. The sort of difference that generally accounts for two or three sacks over a season.

Regardless, he is getting the volume we want and generating pressure, even if he has not got home yet. Right now, those with him on their teams are likely a little frustrated, so it’s a good time to make offers.

In the 2021 regular season, Moore led all corners with 103 total tackles on 1,062 snaps. That was a 9.7% tackle efficiency which is fantastic for cornerbacks.

It cannot be overstated: high tackle efficiency is not a player-owned stat. It has nothing to do with how good a player is. Or whether he has “a nose for the ball” or any other absurd cliches. It’s just that sometimes players rack up a lot of tackles. It certainly wasn’t coincidental that Moore was the most-targeted defender in the NFL last season.

Whatever the reasons, the market believed in Moore. In August he was being drafted as the top corner by a huge margin. In the ADP we ran, he was selected at 205. The next corner off the board was at 253. People were so sure Moore was going to repeat his 2021 (which was an outlier), they were willing to go get him over four full rounds earlier than any other corner.

Moore can clearly improve as a fantasy asset in 2022. He’ll have good days. But right now, he’s a great example of why it’s so foolish to invest heavily in corners.

Naturally, this leads the whole NFL. Disappointment Tae Crowder is second with eight of them. No other safety has more than seven.

Partially this is a volume thing. Pitre has played 227 defensive snaps in three games with only two other safeties seeing more action in that period. But it’s also a “him” issue. His partner Jonathan Owens has missed just four tackles and has played the same number of snaps.

This is an opportunity for us. The Texans are playing a pretty strong SS/FS split so far (which is unusual for Lovie Smith) with Pitre in the box. Normally we’d expect that to lead to better stats, but Owens has eight more tackles than him. Over time we can expect this to change, so there’s value here – even with Pitre’s growing pains as a player so far.

This puts them dead last in the NFL, with the average through three games being 535. The Bears have played 196 total defensive snaps so far which is very close to the league average of 199.

This means that they’re not playing an especially high or low amount but are rushing the passer at an extremely low rate. There are three reasons for this:

The Bears were also dead-last in pass rush snaps, and 30th in pressures in 2021 (under different management). However, they finished joint third in sacks due to a bizarrely high finisher rate which is not a sustainable, or stable metric.

All of this means that no Bears’ pass-rushers offer much return right now. Robert Quinn was never going to repeat his strange 2021, and most intelligent IDP aficionados realized it. But Trevis Gipson and Dominque Robinson have both got people excited with flash games so far in 2022. You should not expect to enjoy many of those types of games from them in 2022.

7. The Seahawks have played 199 defensive snaps so far

The average number so far is 199. They are bang in the middle on about 66 and a half defensive snaps per game. So why is this an interesting stat?

It’s because the Seahawks have led the league in defensive stats for the past two seasons and their IDPs enjoyed all the benefits that come with high volume. Jordyn Brooks was being consistently drafted as a top-five linebacker on the back of playing over 1,100 snaps in 2021.

It was certainly odd that the Seahawks played so much defense in two straight seasons, but history tells us how unusual that is and that there is no clear link between how good a team is and how much the defense is on the field. It’s just one of those myths that seem to make sense. It’s not actually true.

The upshot of this is that we cannot trust the Seahawks to play an especially high number of snaps. A lot of that expectation has been built into their player’s value, so it’s time to readjust.

Tom Kislingbury
Contributor at Dynasty League Football
Being from England Tom only discovered American Football in the late 90s. From there he's gone from casual defender to devoted obsessive and likes to delve into deep data primarily about defensive players. He spends his days trying to pretend the spreadsheets and graphs he makes about football are actually work for his day job. No-one is fooled.
Latest posts by Tom Kislingbury (see all)
Seven IDP Fantasy Football Stats You Need to Know from Week Three