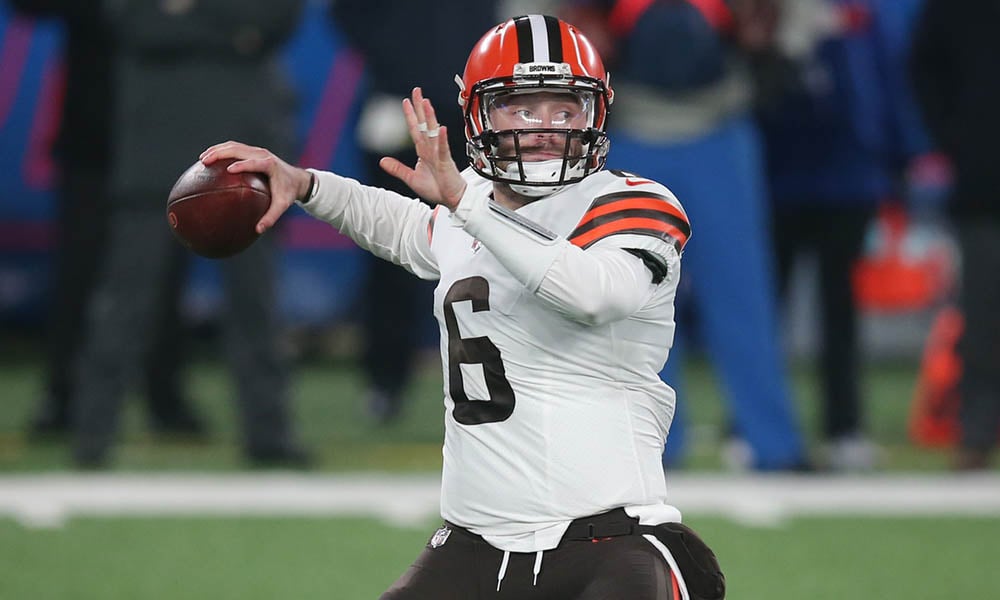 Twitter Observations: Baker Mayfield Moves on, Gabriel Davis in the Best Shape of His Life

We bring you some tweets that kick-start dynasty discussions.

It’s the middle of summer. It’s hot. You’re on your phone while you stay cool inside. We all do it and, inevitably, start looking at our dynasty team to see if there are moves to make. Below are the tweets that could steer some of those moves this week.

At long last, we have a resolution for where Baker Mayfield would end up. After months of negotiations following the shocker of a trade that brought Deshaun Watson to Cleveland, the Browns moved Mayfield to Carolina for a pittance. For Mayfield, it’s a fresh start to cash in on the potential that made him the first overall pick just a few seasons ago. It also means the end of Sam Darnold‘s career as a starter in the NFL. And for the Panthers, having two of the top three picks from the 2018 NFL Draft is probably not what they envisioned but it’ll have to do until they have a long-term solution at quarterback.

Dynasty Impact: For Mayfield’s dynasty value, the move to Carolina may provide a small uptick now that we know he’ll be the starter for 2022. He also will have a supporting cast that’s on par if not slightly better than he had in Cleveland. He has fantasy stud, Christian McCaffrey, at running back (assuming he can stay healthy) and receiver DJ Moore who’s coming off three straight 1,000-yard seasons. Right now, Mayfield ranks just outside QB2 territory in our DLF dynasty rankings. If everything breaks right, he could end up closer to being a top-15 fantasy quarterback like he has a few times in his career. That’s a risk worth taking.

The #Patriots have traded WR N’Keal Harry to the #Bears, sources tell me and @RapSheet. Former first-round pick gets a shot at a fresh start.

There are plenty of options when choosing the biggest bust in recent NFL Draft history but N’Keal Harry might take the cake. After being selected with the last pick of the first round of the 2019 Draft, expectations were sky-high for the former Arizona State Sun Devil. Tom Brady was still a Patriot and New England was starved for an outside option at receiver. But between injuries and generally not impressing in training camp, Harry finished his rookie season playing just seven games, catching 12 balls for 105 yards. It hasn’t gotten much better than that with Harry yet to eclipse 600 receiving yards in his career. Not surprisingly, the Patriots declined his fifth-year rookie option which means he has one more season to prove he’s worthy of a new contract.

Dynasty Impact: It’s rare to see a player decline as much as Harry has while also completely falling off dynasty rankings which is a feat Harry managed to do.

But if all the situations Harry could have ended up in after being traded, the one in Chicago is one of the best. There is very little competition for targets after the Bears failed to suitably replace Allen Robinson. Second-year quarterback Justin Fields needs all the help he can get which may make this a small win-win in the end. If you’re in a deep roster dynasty league, I wouldn’t be opposed to spending some late-round rookie picks on Harry as a flier. You never know when you could flip him down the road.

#Bills wide receiver Gabriel Davis, listed at 210, is up to 227 pounds this offseason, according to his trainer. https://t.co/V9Pr6Sz81L

If it’s the off-season, it’s Gabriel Davis-hype season. Never has there been so much talk about a player who barely finishes in the top 50 of fantasy scoring but Davis’ combination of talent with so little production makes it a perfect storm.

This year is no different as Davis enters his third season in Buffalo. When we last saw him, he was torching the Chiefs’ secondary for eight receptions, 201 yards, and four touchdowns – all career-highs. Davis is expected to be a full-time starter across Pro Bowler Stefon Diggs which should lead to more targets and production.

Dynasty Impact: There is no wrong answer when it comes to Davis’ dynasty value. If you strictly look at production, Davis’ has been a WR4 with flashes of starter potential. Our DLF rankers agree, ranking him 43rd.

But that playoff game was incredible! Some of the game’s best receivers haven’t had that kind of production in a single game. And when you look at the situation around Davis, it’s tempting to think he can continue to be this productive albeit on a smaller but more consistent scale. With both Cole Beasley and Emmanuel Sanders – two receivers who saw more targets than Davis last year – departing Buffalo, Davis is the second longest-tenured Bills receiver after Diggs. They did bring in Jamison Crowder for the slot but he won’t be infringing on Davis’ targets.

Looking at recent trades involving Davis, they range from first-round rookie picks to third-round rookie picks. He’s also involved in trades with studs like Deebo Samuel or DK Metcalf. I wouldn’t go that far but something in the middle (like a second-round pick) sounds right. Davis isn’t guaranteed to give you WR1 potential but is in a good situation in Buffalo.

A Piece of the Allen

Thankfully, there isn’t bad news regarding these two but the tweet and clip do give us a reason to compare their dynasty value. Patrick Mahomes and Josh Allen have truly reached 1A and 1B status when it comes to dynasty rankings. And why not? They have finished as top-five fantasy quarterbacks the last three seasons, are both 26 (as of this writing), and have a clear path to keep dominating fantasy and real-life leagues. So is there a better option between the two?

Dynasty Impact: If forced to choose between the two, Allen would have a slight lead. They both had similar passing stats – Mahomes threw for 4,800-plus yards and 37 touchdowns; Allen threw for 4,400 and 36 touchdowns – but the run game is where Allen pulls ahead. Allen ran for 763 yards last year and six touchdowns. Mahomes ran for half that and has just eight rushing touchdowns for his career.

All of this to say that Mahomes might be the better ‘value’ when it comes to your dynasty league while he’s being lumped in with Allen for the title of the league’s best quarterback. Mahomes doesn’t have the rushing numbers and just lost his best receiver – Tyreek Hill – this off-season. Whether it’s a 1QB league or superflex, there would never be a better time than now to make a huge move for your dynasty team.

Michael Moore
Contributor at Dynasty League Football
Michael has played fantasy football for over 20 years when his mom funded his first team in the fourth grade. He’s contributed to various fantasy football publications and most recently spent five years writing for the Fantasy side of things at Pro Football Focus.
Latest posts by Michael Moore (see all)
Twitter Observations: Baker Mayfield Moves on, Gabriel Davis in the Best Shape of His Life