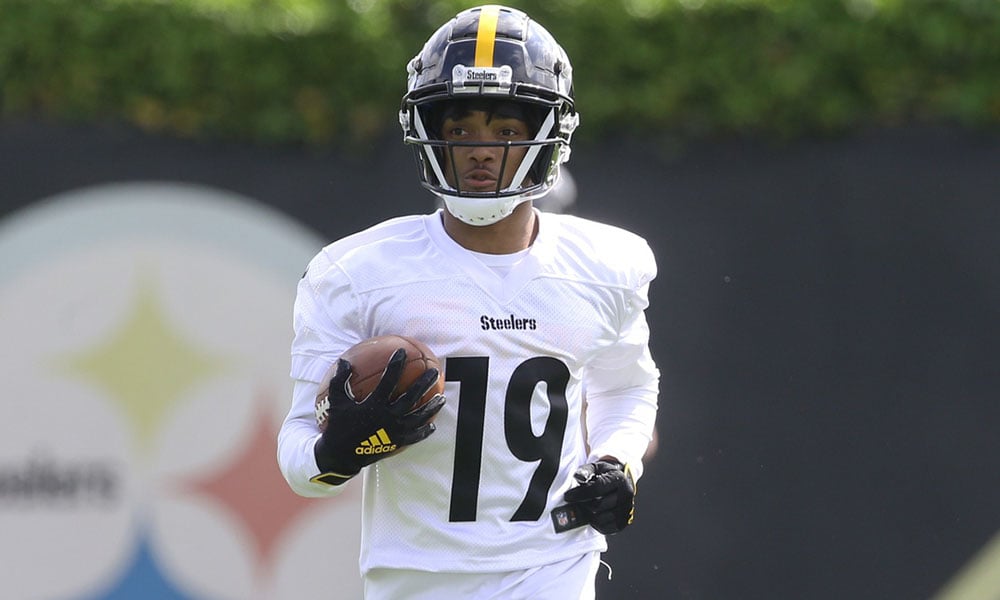 What are Calvin Austin’s chances of succeeding in the NFL and on your dynasty rosters?

He showed excellent skill as a deep threat, breaking away for long touchdowns multiple times in this video. Additionally, he saw play as a run-after-the-catch threat, often catching short throws and using his quickness to gain extra yards. However, he looks extremely small in this video, even against college competition. I believe he won’t be able to hold up to some of these hits and over-the-middle throws in the NFL.

Austin performed exceptionally well in the drills at the NFL Combine.

He ran a solid 4.32-second 40-yard dash, only behind Tyquan Thornton and Velus Jones this year. He also excelled in the jumping events, finishing third in the vertical jump and second in the broad jump, despite his short height. Even better, he won the 20-yard shuttle convincingly, as only Kevin Austin finished within a tenth of a second of his 4.07-second time.

However, none of Austin’s testing numbers truly mattered to most dynasty analysts or the NFL. He measured in below 5’8’’ and at only 170 pounds, and he has an extremely short arm length and wingspan. Austin reminds me of Tutu Atwell from the 2021 class, although Atwell received second-round draft capital from the Rams. But Atwell already seems like a disaster in the NFL, as he’s too small to play wide receiver at the NFL level. Given that the NFL waited until the fourth round to select Austin, they agree that his height and weight do not suggest a strong career moving forward.

He recorded two 1,000-yard seasons in 2020 and 2021, dominating the receiving room both years. No other receiver had more than 50 receptions or 750 yards either year, and he also led the team in touchdowns in both seasons. Additionally, he certainly displayed big-play ability in his highlights, which could translate to the NFL. Overall, though, I don’t find Austin’s prospect profile strong whatsoever.

Austin’s primary weakness is that it took him so long to break onto the college scene, even though he didn’t play at a Power 5 school. I understand that he joined Memphis as a walk-on in 2017, and he didn’t receive a full scholarship until the 2019 season. But even though it’s clear why he didn’t break out early, I’m just not ever going to like a prospect who essentially gave me nothing until their age-21 season.

Worst of all, even though his 2020 and 2021 seasons were decent, they’re not overly impressive. I don’t want to write off all players who didn’t break out early in their college careers, but I would prefer that a late breakout had a far larger market share than Austin’s. He hit 31.09% in 2020 and 32.05% in 2021, but that barely places him above the regression line on this chart. Therefore, he’s now a 23-year-old receiver entering the NFL without impressive production, which does not bode well for his fantasy career.

To make matters even worse, I believe that Austin’s size is basically disqualifying for NFL success. The NFL passed on him until the fourth round, and he’s not a strong prospect in any way outside of his speed and jumping at the NFL Combine. NFL teams often spend fourth or fifth-round picks on depth receivers or gadget players, and that’s how I see Austin. I don’t see a player who has what it takes to crack our fantasy lineups.

I see no opportunity for Austin to crack the Steelers’ depth chart without an injury. Diontae Johnson is the alpha wide receiver on the team, who will serve as the target hog in the offense. Beyond Johnson, Chase Claypool seems like the WR2, although I think second-round pick George Pickens can challenge him for that spot. Additionally, second-year tight end Pat Freiermuth will compete for targets, and I expect him to play an every-down role in year two.

Therefore, there’s almost no room for Austin to contribute to the Steelers’ depth chart. He seems like a cheaper, direct replacement for depth receiver Ray-Ray McCloud, who signed with the 49ers in free agency. McCloud had 66 targets in 2021 after JuJu Smith-Schuster went down, but he only had 39 receptions for 277 yards. I don’t expect much more from Austin, assuming he even gets a chance to play.

First and foremost, unless Johnson, Claypool, or Pickens goes away, Austin has zero chance to play. Those three players represent a solid wide receiver trio with varied skill sets, so there’s no particular need for Austin. Beyond the top of the depth chart, Austin must directly compete with Anthony Miller and Miles Boykin for backup snaps. Neither Miller nor Boykin is a particularly good player, but Miller had at least some success in Chicago. So Austin must start by beating them out, which is not a guarantee.

Austin is more of a taxi squad stash style of player in dynasty formats. I didn’t rank him in my redraft rankings, and I don’t expect him to be a part of the redraft format in 2022. I’d rather stash other players, though.

As I alluded to above, I have almost no long-term expectations for Austin. He seems like a wasted rookie pick to me. If he hits his ceiling and becomes a gadget-type weapon, I still don’t think he’ll be a fantasy starter. I also don’t believe in Kenny Pickett as a high-end quarterback, so I doubt the Steelers will have that many fantasy-relevant weapons.

I already gave my comparison for Austin above in Tutu Atwell. I expect Austin to be a complete bust at the NFL level, although it’s harder to call him a bust with only fourth-round draft capital compared to Atwell’s second-round capital. Austin also reminds me of other players like Tavon Austin, Jamal Agnew, and Isaiah McKenzie. Those players have brought value to their NFL teams, but none of them ever developed into consistent fantasy options.

Austin is the 39th overall player and WR19 in DLF’s May 1QB rookie ADP and 35th overall and WR19 in DLF’s 1QB rookie rankings. I don’t see his ADP price as entirely ridiculous, but I rank him at WR20 and 43rd overall. Although it’s a shallow class, I wouldn’t want to spend my fourth-round pick on him. But, there are worse options.

Tyler Justin Karp
Contributor at Dynasty League Football
Tyler is a fantasy-football obsessed person who loves to write and record YouTube videos. He always tries to back up his takes with statistics and other research, and he's always around on Twitter to discuss fantasy football. Go follow and interact with him on Twitter.
Latest posts by Tyler Justin Karp (see all)
Dynasty Fantasy Football Rookie Update: Calvin Austin, WR PIT

Tyler, thank you for not being afraid to categorize a player as basically not worth rostering. I think we (myself included) tend to get too invested in our deep sleepers, and sometimes I feel like we spend an insane amount of effort and print on these fringe players. It’s refreshing to have someone talk some sense into us, Keep it up!

I appreciate this, a lot.

I see a djax type arch if anything. He was my last pickat 4.07 this year so the capital to acquire him vs the potential reward was too good to pass on. And if he bust? Doesn’t matter hes a grasping at straws taxi squad guy. 2 main factors went into my decision to draft him. Who took him and their propensity to develop wrs. And his big play ability. Plenty of small frame wrs made it big. Djax, hill, dionte, ab and the list goes on.

The body metrics really don’t factor much to me when drafting late and everyone is gone. Sure, we all want a 6 5 230 4.3 Megatron but reality is finding that is rare in the first let alone the back end of the 4th