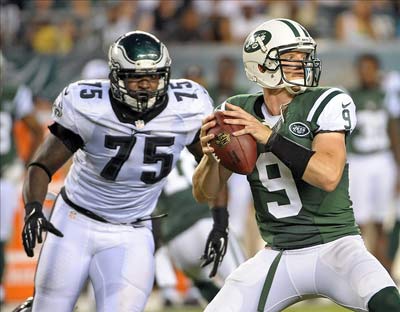 Often, things like quarterback hurries, quarterback knockdowns or snap counts don’t appear in the box scores. These are huge indicators of potential value changes that may be forthcoming as they show a particular player is getting after the quarterback and a string of sacks may be on the horizon or a linebacker may be coming off of the field more than originally expected.

Here are some players and trends to keep an eye on based on week twelve performances:

Week twelve was the first time the 2012 second round pick was active and he didn’t disappoint. Playing 31 percent of the team’s snaps, he posted five tackles and a quarterback hurry. With the release of Jason Babin on Tuesday, it’s clear the Eagles are looking towards the future. That will mean more opportunities for both Curry and Brandon Graham. Given Curry’s performance in his first game and how productive he was with a small volume of snaps, it’s looking positive for his dynasty prospects. Those who were patient with Curry look like they’ll be rewarded.

The young promising inside linebacker will miss the remainder of the season with a broken bone in his elbow. Since the Cowboys lost Sean Lee, Carter has stepped up and shown why the Cowboys invested a lost year with him in 2011 as he recovered from a major injury. The signs of a valuable dynasty linebacker were there in 2012 with more growth anticipated. Expect that to continue in 2013 when he returns from injury.

Over the last four weeks, JMJ has quietly performed well with 14 tackles and 9 assists. Over that time, he’s only played a maximum of 65 percent of the team’s snaps. With the potential to play every down, as well as the weakside or middle linebacker position, JMJ is a great wait and see linebacker with the potential to be a weekly contributor in fantasy lineups once he moves in to those roles. If he’s on the wire, he should be rostered in average and deeper leagues.

He’s only playing in a rotational role at this point, but the rookie end continues to get to the quarterback. On the season, he has 21 quarterback hurries which ranks 23rd among defensive ends overall. Impressive stat. He isn’t worth a regular start and should only be stashed in deeper leagues, but it’s clear Alexander has the talent and potential to be productive if given the opportunity. Both Charles Johnson and Greg Hardy are playing extremely well, so he won’t see more snaps than he currently is, but he’s a decent long-term play in much deeper leagues given his early success.

Gomes started early in 2012 with Brandon Meriweather out, but he didn’t last long in that spot. He got a second shot in week twelve and played 89 percent of the team’s snaps. He finished the game with five tackles and a fumble recovery. He continues to be productive when given the opportunity, but he given the early season struggles there is some hesitation from the coaching staff and IDP owners. The positive factor is that he looked more comfortable against the Cowboys, so he’s worth monitoring in shallow leagues and stashed in others to see if that continues.

After starting strong in week one with five tackles and six assists and continuing with solid production throughout the year, Jordan ranks as a top ten defensive end in most formats. Most impressive and notable, however, is that in the last four weeks he has 16 of his 22 quarterback hurries on the season. Overall, over that four week period he’s been exceptional in defending the run and rushing the passer. He’s exceeded expectations to this point after a disappointing rookie season and looks to be a young defensive end who is a viable option long-term.

He’s listed as a defensive end in MFL, but is playing a lot of defensive tackle for the Raiders. Over the last few weeks, Bryant has eight hurries, seven tackles, and four assists. At only 26 years old and a free agent in 2013, Bryant is a nice preemptive pickup for owners in defensive tackle required leagues who are looking towards next season. With the time at tackle thus far, he may again be defensive tackle eligible in 2013 like he was in 2011 depending on where he ends up.

Liuget is another second year defensive end who’s really stepped up in his second season. He’s played well in all defensive aspects throughout the season, but it’s only the last five weeks that the impressive play has shown up in the box score. Granted he’s a 3-4 defensive end and thus not as consistent, but over the last five weeks he has 16 tackles, 5 assists and two sacks – that’s top ten in most formats. He makes a perfect second defensive end and should no longer be on the wire despite his unfavorable position.

In week twelve, Suh posted a zero for most IDP leagues with no tackles, no assists and no sacks. However, he also tallied seven hurries, three quarterback hits and a quarterback kick. According to Cris Carter (ESPN), Suh is playing the best football of his career. Unfortunately for fantasy owners, Suh continues to be double teamed on every play. That’s opened things up for Nick Fairley in recent weeks, but 2012 is likely to finish as an improvement on 2011 for Suh. As he matures (hopefully), he should continue to be more productive in the box score. He’s certainly performing well enough.

He’s not playing a huge percentage of snaps on a consistent basis, but Robinson is active in the tackle department considering the number of snaps he’s playing. In corner-required leagues, Robinson must be monitored through the end of 2012 and throughout the offseason. He has the ability to be extremely productive for fantasy purposes given his tackling ability.

Brandon Taylor, SD SS – Atari Bigby is out for the remainder of the season and the Chargers are struggling, so Taylor should see snaps. Corey Lynch is expected to start in Bigby’s absence, but expect to see Taylor rotating in over the next five weeks.

Sean Weatherspoon, ATL WLB – Weatherspoon is back and healthy, which means Akeem Dent is again relegated to a two-down role.

Mike Martin, TEN DT – Martin continues to see limited snaps after starting 2012 with a string of impressive performances. I wouldn’t give up on him just yet, but he may be more of a 2013 play in defensive tackle required leagues.

Daniel Te’o-Nesheim, TB DE – Since week seven, he’s played roughly 80 percent of the team’s snaps. Over the last four weeks, he’s been productive in the box score with 13 hurries, one sack, and 11 tackles. The third year defensive end is currently seeing more action than Da’Quan Bowers.

Who if any of them would you drop for Curry?

Not sure what the implications are for you in cutting a contract short and/or where you are as far as playoffs go and if you’re able to extend guys, but I’d drop Wolfe for Curry. Curry’s upside (like Vernon’s) is tremendous. There’s less stability there compared to Wolfe, but I always prefer the higher ceiling.

What are your thoughts on Miles Burris? Should I sign this guy long term?

Was considering the same thing in my deep dynasty. He’s on my taxi and considering signing him to a 3 year deal. My hesitation is that he really hasn’t played terribly well the last 3-4 weeks.He’s been struggling in pass coverage.

Based on that, if you can wait and see / keep him on your taxi for a bit, I’d try to hold off to see how he plays the next few weeks. Ultimately, it really depends on what a long-term deal has as far as implications on you. If you sign him long-term and he fizzles, are you stuck with the full contract, or can you cut him and get part of the contract back? If you’re stuck with the entire thing, I wouldn’t sign him long-term given the recent struggles in pass coverage. Again, if you can wait it out a little more, that’s what I’d suggest.

I see that McClain has been released does this change your thought on his value? I can wait one game to sign Burris and then I have to make a decision. If I cut him I get a cap hit but that’s it.

He’s actually still with the team. That was a false report. Either way, though, it doesn’t really change my view as Burris was playing a heck of a lot more than McClain in recent weeks.

How deep is your league (i.e., # teams / roster size)? Is the cap hit for full contract value or a portion?

Assuming you’re in a reasonably deep league and you were forced to make a decision, I would probably sign him.

Which would be the higher waiver priority for my team. This year for championship run (Stewart) vs long term dynasty (Curry)

I am week at both positions

Thanks for any help

I’d go with Curry. McFadden is going to be back in the near term (if not this week).

would u drop daquan bowers for vinnie curry? 1pt tkl, 3pt sack. its a dynasty lge and im looking towards next season.

Anyone else on your DE roster?

Tough call between these two given the potential of both. Personally, I would go with Curry given Bowers’ injury history. They both have similar upside, though.

also growing tired of earl thomas being so yawnstipating for my dbs. 1pt tkl, .5pt assist, 1pt pd, 4pt int. would you drop earl thomas for jrobinson, gomes or taylor? kinda leaning taylor. only gonna carry one of them into next year so i would be dropping thomas for them. thanks

I know Thomas has been disapointing from a fantasty perspective, but I’d have a difficult time dropping Thomas for any of these guys at this point. Since you’re only going to carry one, I’d stand pat for now.

I like Taylor quite a bit, but am not ready to boost him ahead of Thomas – especially since we haven’t seen him on the field in the regular season and he’s not starting yet. If you’re looking to only hold 1 DB, I’d hold off for now until we see some of Taylor’s play.

Which of these two would you start?

Williams and a toss up, but think I’d go Barnett assuming he plays. It’s a catch-22. JAX isn’t a great matchup, but Foster may not be in for a high volume of snaps as Broncos should keep TB in sub-packages most of the day which may reduce Foster’s snaps. He’s playing in some, but David playing over him in dime.