The original Jaguar E-Type Roadster is widely regarded as the most beautiful car ever made. Stunning from any angle, it looks almost as good standing still as it does hurtling down a narrow British secondary highway, inches from the hedge. Thank goodness too, because as any car aficionado knows, old Jags spend as much time parked, waiting to be repaired, as they do on the road.

If it isn’t yet clear where I am going with this metaphor, Cordarrelle Patterson is like a broken down E-Type. You can’t stop looking at him, dreaming of how awesome he’d be if he just got fixed up. But when it comes down to it, Patterson is just a very expensive toy who isn’t all that likely to provide much fun considering your investment.

Like the Jag, Patterson is a dynamic talent whose beauty blinds reasonable judgment. His rookie season brought us a handful of explosive plays that cause fantasy folks to froth at the mouth like a rabies infested skunk. Standing 6’2”, he has the size to assert himself in ways his most frequent comparison, Percy Harvin, cannot.  At the same time, CP is rawer than fresh rug burn. His route running is comically bad and he cannot be productive unless his offensive coordinator finds ways to get him the ball in space.

Let’s put aside the bad for a moment and talk about achievable upside. In a perfect world, Patterson figures out his route running issues, continues to work some out of the backfield and ends up as a perennial top-10 receiver. Not good enough? Sorry, but because he is not a traditional player, and will almost certainly never be one, Patterson’s teams will always have to manufacture touches for him. That may not seem like a big deal, but it ultimately prevents his inclusion in the A.J. Green, Dez Bryant, Julio Jones, Demaryius Thomas, Josh Gordon, Calvin Johnson discussion.

What evidence do we have that this he could reach even the heights of top-10-dom? For starters, Norv Turner is coaching in Minnesota and we all saw what he did with Josh Gordon. Oh, and there was the Week 14 game in five feet of snow against the Ravens. And, uh, he had a really awesome run in Week 17. Dude, have you seen him play? He is SO AWESOME!

OK, OK, OK, that last paragraph was sort of a cheap shot, but I did it for a reason. When you talk to most people about the former Volunteer, this is all they have to lean on. They saw him run fast on TV, and now that Norv is in town…boom, instant superstar.

In an effort to legitimize the assertions of the CP supporters, I pulled up the excellent Similarity Scores tool over at Rotoviz. Instead of seeking out comps from the entirety of his rookie season, I used only the games in which his 2014 quarterback, Matt Cassel, played significant snaps. It makes for a smaller sample size, but since it includes Patterson’s best games, it fits in with the best case scenario aim of this discussion.

The stats listed are per game averages for the players whose rookie seasons most closely compare to Patterson’s. Before you get too disheartened by the proliferation of unkind comps, keep in mind that this does not take into account rushing stats. Also take note that nearly all the players who did end up as fantasy relevant did so in a significant way. Besides, it isn’t as though we didn’t know a player like Patterson didn’t come with some element of risk.

Now that we’ve built the youngster up, it is time to have some fun and tear him down.

Handoffs are for Running Backs

Let’s get this out of the way – Patterson isn’t going to average 13.2 yards per carry ever again. It also isn’t terribly probable he continues his late season pace to a 40-carry season. And considering the difficult nature of touchdown prediction, you shouldn’t expect many more than the three rushing scores CP achieved in 2013. If you are counting on any of this in your projections for the youngster, you are liable to find yourself at the intersection of Disappointment Avenue and Crying in Your Beer Drive.

Norv is Not Infallible

Over the last 25 years, there hasn’t been a better offensive coordinator (for fantasy purposes) than Norv Turner. After spending dozens of hours studying Turner and his contemporaries for several different columns I’ve penned in the last year, I feel pretty qualified to make such a statement. But as good as he is, if there is one area where Turner doesn’t light the world on fire, it is at wide receiver.

The average fantasy finish for Turner’s number one receivers is 23rd. If you remove the players who finished as a top-10 receiver without Norv’s assistance (Michael Irvin, Henry Ellard, Randy Moss), that drops to 28th. Two others (Curtis Conway, Vincent Jackson) finished in the top-15 multiple seasons without Turner.

Those who have had success all had something in common – they excel at playing the long game. The incumbent number one in Minnesota, Greg Jennings, is no different. What does that leave for Patterson? Table scraps. As you will see below, Norv’s number two has finished as a WR3 only six times in 23 seasons.

The highlighted cells are the seasons with Irvin, Ellard, and Moss. For this table, their ranks were used to calculate the average. 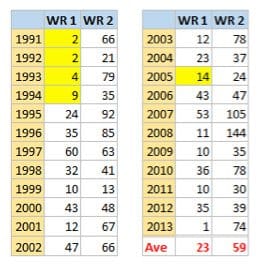 Something this simple table doesn’t show is that all of Turner’s success with receivers has been achieved with a fairly specific style of player. He has a vertical system that leans on a clear lead back (Adrian Peterson), the tight end (Kyle Rudolph), and a number one receiver with the ability to go vertical (Jennings, who has been among the best deep threats in the league over his career). For all Turner’s qualities, flexibility hasn’t traditionally been among them. His inability to adapt was in large part responsible for the Chargers’ offense faltering significantly his last two seasons there. With over 20 years of evidence to the contrary, I’m having a bit of trouble believing Norv will suddenly change for Patterson and not expect it to be the other way around.

Stats are often misleading, but sometimes they can tell us something about ourselves. To that end, let’s do a quick blind comparison.

With such a similar rookie output (both scored four touchdowns of 50 or more yards), situation (struggling offenses with quarterback issues) and warts (neither was effective unless force-fed), why is Patterson leaving the board some 60 spots ahead of Austin? The most quantifiable factor is size as Tavon is five inches shorter and 40 pounds lighter. Didn’t we know that in August when Austin was being taken 30 slots ahead of Patterson?

I find it hard to believe a fact we were aware of last off-season is the sole reason for such a dramatic change in perceived value. To me, there are two other causes for the current chasm.

The resulting prejudice from the first point is a direct result of recency bias. While that term is thrown around a bit more than it should be, this is a clear case of its existence in the world of fake football.

As for the second point, I would never pretend it doesn’t matter how a player looks on the field. That said, it is all too easy to allow the intoxication of a few impressive plays to blur your view of the larger picture. Go back and use your ocular orbs to watch some Vikings footage. Unless they are manufacturing touches or getting him in space, which are two things that never work as well as you hope, Patterson is a near non-factor.

The passing of the eye test is enough for me to move him ahead of Austin in my wide receiver rankings (26th vs 36th), but it will take much more than that for CP to come anywhere near my top 10.

Now that you’ve spent a bit of time reading the preceding 1,400 words, forget all of it. Why? Because Patterson’s current ADP is all that really matters.

Are you sitting down?

Our mock data has him as the 17th pick, which is eighth among wide receivers.

Every time I write that, the insanity of it nearly causes me to have a seizure. This article has actually taken me three weeks to finish because whenever I get to this part, I end up drinking half a bottle of bourbon to try and cope with the lunacy. Let’s be honest here, kids. Even if Patterson achieves the best case scenario we outlined above, it is incredibly unlikely he outperforms his ADP. Very few players ever do well enough to justify such a lofty pick, much less an uber-raw second year player who hasn’t done much other than look fast a few times.

There is a saying among Jaguar owners – the two happiest days of ownership are the day you buy and the day you sell. I say you’d be happier overall if you sat in a lawn chair and drooled over the E-Type in your neighbor’s driveway with your checkbook safely in your pocket.