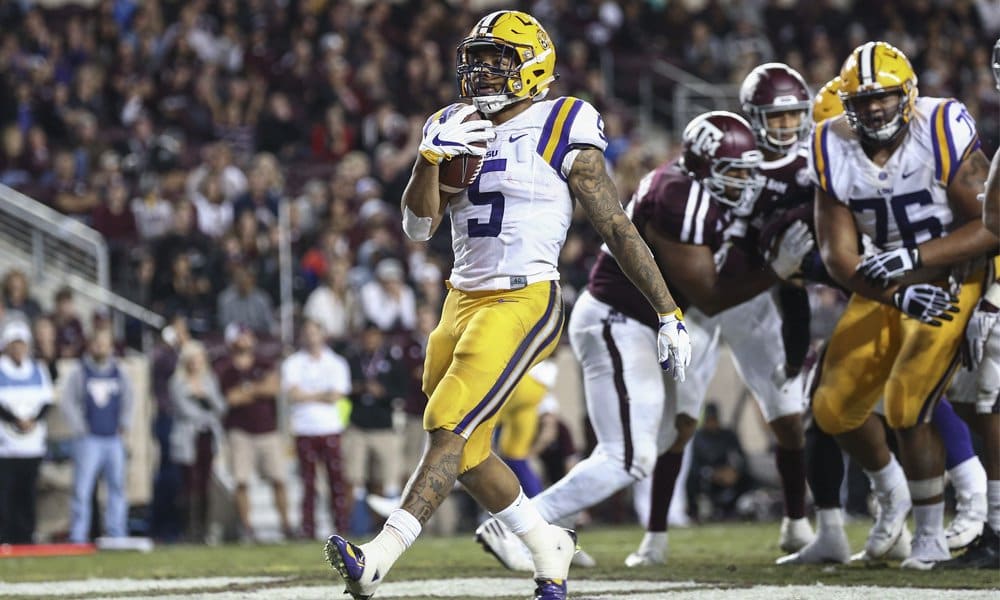 We round up the latest SEC performances, including a huge game from Derrius Guice.

With starter Leonard Fournette once again out of action, sophomore Derrius Guice easily filled the void as the Tigers running game led to a victory over Texas A&M. Guice’s 285 yards set a new single game school record, eclipsing the record previously set by Fournette earlier this season by one yard. Guice is now second in the conference in rushing yards and is tied for the lead in touchdowns. For dynasty owners, it might be a long year to wait to get their hands on Guice after his college career presumably concludes following the 2017 season.

Since former starter Jalen Hurd left the team, running back Alvin Kamara has been putting up big numbers for the Tennessee Volunteers. While the Vols lost to underdog in-state rival Vanderbilt, Kamara was a weapon both as a runner and a receiver, totaling 141 yards and three touchdowns. Kamara is in the second tier of running back prospects, but has been seemingly gaining value and has already declared for the upcoming NFL Draft.

I’ve had my doubts about Georgia’s running back Sony Michel at times this season, but he ended the regular season on a high note, rushing for a career-high 170 yards, essentially splitting carries with starter Nick Chubb, who managed 88 yards on 22 carries. With the regular season over, both Chubb and Michel will reportedly strongly consider making the leap to the league.

After a slow start to his junior season, Tennessee wide receiver Josh Malone has emerged as a reliable threat, averaging over 100 yards per game the last month, scoring five touchdowns over that span. Malone’s seven receptions for 121 yards both represent new career highs. Like most talented juniors, Malone said he would consider declaring early for the NFL Draft, but wasn’t ready to make a decision yet. With his quarterback Joshua Dobbs graduating and Kamara already letting his intentions be known, I would expect Malone to make the leap as well.

After missing a pair of games with a leg injury, former SEC rushing leader Kamryn Pettway returned for Auburn’s final game of the regular season against top-ranked Alabama. Predictably, things did not go well. Pettway managed just 17 rushing yards on 12 carries. Hopefully, the redshirt sophomore will be fully healthy by Auburn’s bowl game.

True freshman Trayveon Williams was a sensation in the first half of the season, rushing for over 100 yards on three occasions in the first five games, including putting 217 on the Tennessee Volunteers. Since that game though, Williams has failed to break 80 yards. It is not a major surprise to see a true freshman, especially one standing 5’9” and weighing under 200 pounds. I still like Williams and he should be a heavy contributor to the Aggies offense next season, but I don’t see him as an elite prospect.

Another freshman runner who has slowed down in the back half of the season is Florida’s Lamical Perine, a cousin to Samaje Perine of Oklahoma. After a pair of 100 yard games earlier in the season, Perine has just 94 total rushing yards in the past five games, as Jordan Scarlett has taken command of the Gators backfield. With Perine, Scarlett and Jordan Kronkite all expected to be back in 2017, we could continue to see a split workload.

Even in their rivalry game, the Alabama offense couldn’t be stopped, scoring 30 points on Auburn in the Iron Bowl. Freshman Jalen Hurts continued his dark horse Heisman campaign, throwing for 286 yards and two scores, while adding 37 rushing yards and another touchdown. The backfield carousel continued as Bo Scarbrough led the way, rushing for 90 yards on 17 carries. Damien Harris only got nine carries for 47 yards, but did add 22 receiving yards and a score.

Senior ArDarius Stewart continued to lead the receivers, posting a 10/127/1 line, while more highly regarded sophomore Calvin Ridley had a quiet game. Over his past two games played, Stewart has 18 receptions for 283 yards and four touchdowns. One CBS analyst even called him a sure fire first round NFL Draft pick. While that won’t happen, Stewart could be a dynasty sleeper come next spring.

Since highly ranked true freshman Shea Patterson removed his redshirt and took over as the starter at Ole Miss, things have not gone well. The Rebels did win their first game, coming from way behind to overtake Texas A&M, but they then lost their final two games, to Vanderbilt and rival Mississippi State. Nevertheless, Patterson has managed to post some nice numbers, nearly 300 passing yards and two touchdowns per game. With injured senior Chad Kelly now off to the NFL…or at least gone from the Ole Miss campus, Patterson will enter 2017 as the team’s starter and will be very highly valued in all devy formats.