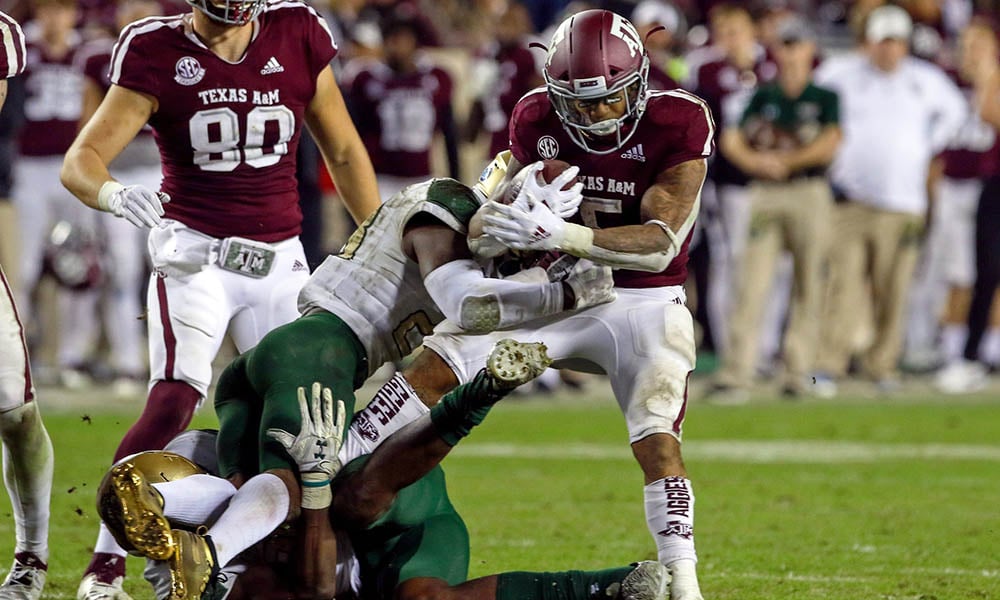 We continue our breakdown of the best running backs in this year’s class based on ADP.

Now that the 2019 NFL Draft is drawing near and dynasty owners all across the country are making their draft boards, it’s time to start helping by reviewing all running backs in order of current average draft position. Not all players pan out at the NFL level, so I am going to be critical at times that require it.

The following is a quick summary of the ninth through twelfth ranked running backs by ADP. In this series, I will review as many rookie RBs that I can cover prior to the draft, four at a time. My track record over the past three seasons is near 100%, as shown on our DLF forums by users who have tracked my history. I’m going to put it all on the line yet again for the 2019 rookie season.

I studied the following players for roughly an hour each. I not only watched game footage, but also searched for high school and collegiate interviews. Knowing if a player has the mental capacity to become a student of the game is important, and since I can’t be in the room with them, there’s no better substitute than interviews.

He is smaller than the average running back, measuring in at 5’8” and 206 pounds. As mentioned in a previous article, this is not a combination that holds up well over time.

If you only watch his highlights, you might come away impressed with his short and long speed. I don’t know if there’s anyone I’ve studied yet who has had the full range of this speed. You should also notice, however, that every single “highlight” is just hitting a large hole as fast as possible.

I like to see tailbacks who can make room at the line of scrimmage and avoid tacklers in close space. The NFL is a game of inches, and so we need to find players who can seek out and exploit those inches as much as possible.

Man blocking, hat on a hat. Texas A&M has seven blockers for seven defenders. All Trayveon has to do is pick a good spot and go. Instead, he is unable to take advantage of this excellent blocking and barely gets to the line of scrimmage.

Some people love Williams and I think it’s because they are enamored with his highlights that show breakaway speed and long touchdown runs. What about this run? He only has to beat one man to the first down marker, a cornerback who backpedaled 10 to 11 yards downfield.

Every running back should be able to turn this play into a first down, either with power or with speed, preferably with both. Trayveon Williams somehow managed to get tackled right at the point of contact. Not good. There are dozens of plays just like this that I could choose from. I didn’t cherry pick bad plays.

His combine numbers support the tape. Fast straight ahead speed, and he recorded the slowest three-cone and second-slowest 20-yard shuttle times. A running back who can’t move his body laterally is not a good sign. I can see special team duties with this guy if he’s going to make it a career in the NFL.

5’10” 211 pounds, comes from Ohio State, the same university that produced Ezekiel Elliott. Nagging injuries have plagued Mike through his career, and future star JK Dobbins cut into his workload over that time.

Mike plays quick and fast. He’s able to get what the offense blocks for him and that’s just about it. His highlights are not much more than long runs with a few jump cuts and a few spin moves to make you ponder what he’s capable of.

He ran mostly behind man blocking, but there were a few instances of zone runs that I had a chance to study. He didn’t display any stop-and-go footing, and he frequently leaned into his cuts rather than use his legs to get into open space. In other words, he’s not going to be able to run in any zone system with his current skill set.

His interviews hint at his ability to be a student of the game. I came away more impressed with his knowledge of football more than any other running back I’ve researched so far. I think he’s very coachable, and the system in which he falls will definitely dictate his potential going forward.

There are no plays to show you. They all look the same. The offensive line blocks their guys, Weber hits the hole and goes as far as he can. He’s tackled, play is over, repeat. It’s rather boring to be quite honest. Then again, someone who does their job is sometimes all you need.

His combine matches his game film. He ran a 4.47-second 40-yard dash, which is very good for a man this size. This alone will increase his draft stock, and if drafted to more of a power system, I can see Mike Weber actually having some success, perhaps as a spell back or a low-end number two at best. A lot of things will have to go right for this to happen.

Probability of Success: 50% (as a flex, if he lands in a power system)

Talk about a back who’s getting no respect. Sure his forty time was the second slowest of all running backs (Elijah Holyfield) and sure he produced a pedestrian-like 5.1 YPC in college, but Snell is no running back to ignore.

Snell measures in as a 5’10” 224-pound back. David Montgomery weighs in at 5’10” 222 pounds, ran a slower 40 and had a worse vertical, yet people are anointing him as a top five back in this class. So let’s give Benny Snell his due.

The thing I like about Snell is that he’s not pretending to be something he’s not. When he gets to the edge versus another defender, he doesn’t try to outrun him, he’ll try to run through him. Snell understands his strengths and tries to play to them.

He has nice quick moves and some good agility for a man his size. He displayed several stop-and-go feet along zone blocking. He showed good straight ahead runs when taking the ball out of power. He did a few stutter-steps to allow his blockers to get in place.

Benny Snell appears to be a smart back, and his interviews dictate the same. My one complaint is that he always seems to be self-promoting, as if he’s already achieved success. I hope he doesn’t get complacent and lazy with building his skills at any point in his career.

In this one play, we get to see a bit of what Snell has to offer. He stutter-steps at the start, buying time to allow his pulling guard and lead blocker to get across the line of scrimmage. He lowers his pad level, hits the hole as quick and hard as he can, and then finishes off the run with a well-deserved touchdown.

I think he can be a good compliment back to a team that already has a speedy zone runner. Miami? New England? New York Jets? I see many great places for teams to utilize his talents. He doesn’t catch the ball much, so that could detract from his potential landing spots.

The downside is that I don’t think he’ll ever be the lead back for his team. He has flex play written all over him. His ceiling could be RB2 if the lead back ever gets hurt, but that’s not something you want to count on.

Probability of Success: 67% (as a flex only)

Here’s the complete list of backs in the NFL who stand 5’9”, weigh between 195 and 205 pounds, and are consistently a top 20 back in the NFL — James White, end of list. And can’t we all agree that White is merely a product of the system who does it through the air rather than the ground?

That’s where we are with Love. Here are some other names that match his size — Ahmad Bradshaw, Ameer Abdullah, and Ronnie Hillman. The ceiling for Bryce Love is already lower than that of most other NFL running backs, and he hasn’t even taken the field yet.

Then again, maybe it’s even lower. Love tore his ACL in his final game at Stanford. ACL injuries take eight months to recover from, and sometimes not for two years to fully recover. It’s possible Love will never again be as fast as he was, which is sad because his speed is what I want to showcase next.

You can watch Love all you want, but the true test to a players’ speed comes from watching the defense, not the offense. Do you see the cornerback at the bottom of the screen? When he realizes it’s a run, he tries to position himself in a spot where he can make the tackle.

Defenders are trained their entire career about the “angle of pursuit”. You judge a runners’ speed with your speed and you pinpoint the location you need to be in order to make the tackle. The corner did just that and still misjudged the angle by a mile. That is some serious speed.

Patient behind the line to allow his blocks an extra split second to develop, makes a guy miss at the line, makes an impressive gain with players chasing after him, a great stiff arm and rattles around for a few more yards. This kid is impressive.

If you’re not looking to win it all this season, this is the running back for you. Then again, he’s going so late in the NFL draft that you can probably scoop him up with a third-round pick. He’s probably not going to play much if at all, and may not reach his full potential until 2021.

That’s the risk you take drafting this kid, but it comes with a huge reward. I think that Bryce Love would have been in the conversation for the first RB taken in this NFL draft, despite his diminutive stature. Oh, and his interview is fantastic. He went to Stanford you know.

Probability of Success: Unknown Due To Injury

Mike Havens
Mike is a 3-time graduate of Castleton University in Castleton, Vermont with full concentrations in mathematics & statistics.He has dabbled in a little bit of everything (poker tournament winner, nationally ranked in pinball, rolled several 300s in bowling) but when it comes to time spent and money gambled, fantasy football reigns supreme.

You can follow his opinions on Twitter @MikeEHavens
Latest posts by Mike Havens (see all)
Analysis of Rookie Running Backs by ADP: RBs 9-12