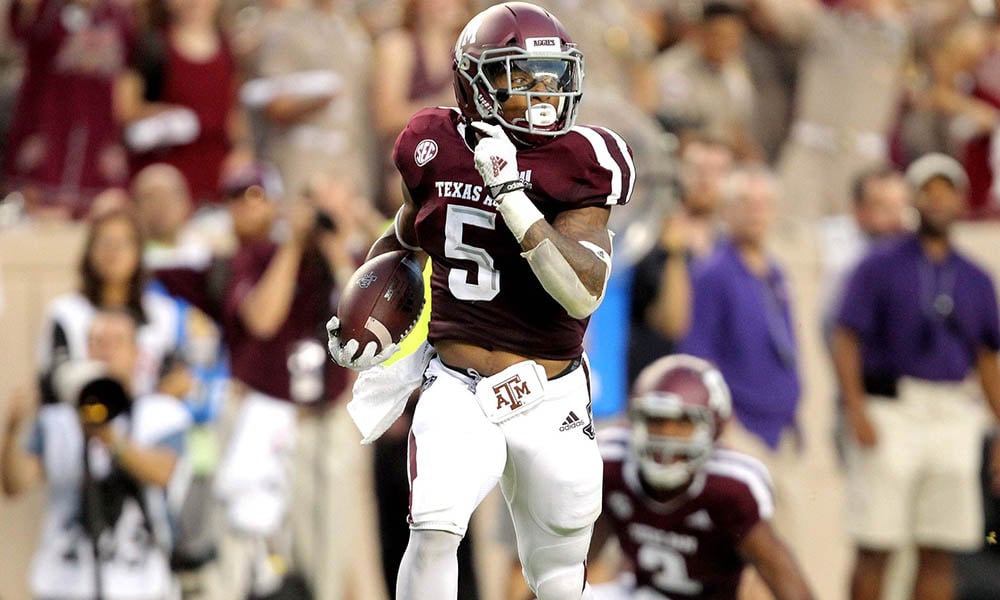 We wrap up the latest DLF staff rookie mock draft.

April has arrived! The snow is almost gone, the birds are returning, and the long winter is just about over (or just about the begin!!). This also means that the 2019 NFL Draft is very quickly approaching. The combine is over and the pro days are currently happening.

The pre-draft rankings for rookies are starting to solidify a little bit. The team these players land on will of course have some impact on their overall dynasty value, especially in the short term, but knowing where your favorites stack up now, especially if you are a believer in long term value, can give you an added edge in trade talks.

To help you out, I gathered some of DLF’s finest to do a run through of how the first three rounds might look.

The rules for this mock draft were pretty simple:

If you missed the first round or the second round, take a moment to look back.

Let’s take a look at the third and final round.

Pete’s Thoughts – Take a chance in Kansas State running back Barnes at the 3.01. He has one of the top athletic profiles in the 2019 NFL Draft and produced better numbers each year while at college. I was unimpressed by his college film at times based on his athletic profile but expect better things with a more competent offensive line in front of him.

My Thoughts – Boasting a complete skill set and some solid college production, Barnes is a pretty decent flier at this point in the draft. While his athletic ability didn’t always show up with the pads on, there is definitely a little bit of promise. If he lands in a favorable situation, he might be one to watch moving forward.

Kyle’s Thoughts – Considering Kyler Murray went a full round ahead, I will gladly take Haskins here. While I do have Murray ahead of Haskins in my personal rankings, I did not expect there to be this big of a gap between the two. While it looks like there is a decent chance Murray is the first pick in the NFL Draft, Haskins looks like a good bet to be a top 10-15 pick himself. I am a fan of his game and he will get plenty of chances to succeed.

My Thoughts – Looking to the quarterback position (or an IDP if your league supports them) at this point in the draft is always a great choice. Given that the vast majority of running backs and receivers drafted this late in a rookie draft never amount to anything, it is little more than throwing darts. However, taking Haskins provides a much better chance of getting a starter quality player.

Jake’s Thoughts – I’m not the biggest Williams fan, but you can’t deny the value here in the third round. James Williams was in consideration here.

My Thoughts – Slightly undersized and a little bit of a plodder, Williams was highly productive during his time in Texas. He has a three-down skill set and seems to have the determination to be the lead rusher wherever he goes. This could mean he could overachieve in the NFL, but I think his athletic ability might cap him as a backup or a committee back at the next level.

Levi’s Thoughts – I am very surprised that McLaurin fell this far in the draft. He seems to be a very hot name that is flying up NFL draft boards. Even Mel Kiper (whatever that is worth) had him going #26 overall to the Colts. He checks all the boxes, 6-foot, 210 lbs, 4.35-second 40-yard dash, and a 37.5-inch vert. I think he will end up being an early second round rookie pick after the NFL draft.

My Thoughts – McLaurin possesses a very positive physical profile to go with somewhat limited production while in college. Some of this might be due to Ohio State’s system, but it might be because McLaurin is more athlete than receiver. He has a ways to go in terms of his hands, and his routes are sometimes inconsistent. What he showed at the senior bowl was leaps and bounds ahead of his game film, so there is some promise.

My Thoughts – If your goal is to find upside at this point in the draft, Boykin just might be the highest upside choice you can find. From a size, speed, and athletic profile perspective, he just might be the best receiver in this entire class. Yes, maybe even better than all of the top prospects at the position.

While Boykin has the things you can’t teach, he is extremely raw. His routes are a mess at times, he struggles against press coverage, and he has some focus issues. If an NFL team can get him to put in the time and energy required, he could be huge in a few years. However, it is going to take some time and a lot of coaching for him to turn into something special.

Michael’s Thoughts – His stock has certainly taken a dip lately but I’m more than ok taking him in the third. He doesn’t do anything exceptionally well but is strong and a good route runner and certainly has the pedigree (school, family) to at least have a chance.

My Thoughts – Much like his older brother, Riley really struggled at the combine. His brother seems to have made a successful transition even with those poor numbers, but I also think that Calvin Ridley is a much better player than Riley. I think his upside is as a possession receiver to help keep the chains moving while someone else is the big play receiver.

Jeff’s Thoughts – My gamble pays off and I get the last of the three quarterbacks here in the third round. Lock is certain to be a top 16 selection and given the disparity of the top three slingers in this class, I’m happy to have the one I feel is the readiest for the NFL with an arm and body to match.

Like most rookies, he would benefit from sitting a year to allow acclimation to the speed of the NFL game, but my bet is that he’ll be under center for the second half of his rookie year. Most importantly, what I like to see in my rookie quarterbacks is year over year improvement in completion percentage. Lock checks the box in this category, finishing his senior season with a nearly 63% completion percentage with 28 touchdowns to only eight interceptions. In the third round, this is a steal.

My Thoughts – As I mentioned earlier, the smarter, safer choice at this point in a draft is to go away from the rushers and receivers. Grabbing Lock at this point is a great move. Like most people, I have him as the third quarterback in this draft class with a bit of a drop off after him. Where he ends up will ultimately determine his early career success, but it is a good pick none the less.

Kyle’s Thoughts – This late in the draft, I’ll take a shot on an old devy favorite: Damarea Crockett. He has great size and tested really well at his pro day. He has received very little buzz but could be a late riser this last month before the NFL draft.

My Thoughts – I’ll be honest on this one, I had no idea who this was when Kyle drafted him. That means he is likely a last round pick no matter how many rounds you have. With that said, I went and did a bit of homework on him. He has some nice moves in the open field and can make people miss. However, the fumbles, lack of use as a receiver, and some issues getting out of the offensive backfield make me pause a bit on him.

Brian’s Thoughts – I’ve read about the limited upside of Snell at the next level, of his lack of agility and receiving production. All I know is that I just snagged a running back in the late 3rd that ran for 3,873 yards and 48 touchdowns in three years of playing in the Southeastern Conference, and as long as he’s running through people, I don’t really care about his agility scores.

My Thoughts – It is going to be very interesting to see where Snell is drafted and how he is used in the NFL. Highly productive in college, though he tended to abuse bad defenses while being very average against good ones. His lack of use as a receiver as well as his limited agility are definitely concerns, but he will find a role in the NFL. It could be as a two-down thumper or just a short yardage specialist.

Peter’s Thoughts – My first running back in this mock is also basically a WR. I think he’s a very good bet to lock down a receiving specialist role if he is drafted to the right team.

My Thoughts – Peter is right in saying Williams is basically a wide receiver. While he is great in the open field, he struggles when running between the tackles to the point where I don’t think he has the instincts and/or vision to do it at an NFL level. Instead, I think he might be a return specialist or a pure pass catcher in the NFL.

Levi’s Thoughts – At this point in the draft, I am looking for pure upside. I was tempted to draft Jalen Hurd here but decided on the track star instead. 4.39 40-yard dash, 43.5-inch vert (woah), and a 141-inch broad jump. His route running needs some work, and he doesn’t have great ball skills and relies solely on his speed. He will be a project with quite a bit of upside.

My Thoughts – The third player from Missouri to go in the last five picks of this mock draft, Hall is another player who is more of a last round flier no matter how many rounds you have in your draft. Levi nailed it with the pros and the cons. If you have deep rosters or a taxi squad to hold him for a few years, it is worth a shot.

My Thoughts – Michael, who drafted Lodge, just had a nice write-up on him explaining why you should consider him at this point. It had some great points, but I’m going to look elsewhere. The “other” receiver for Ole Miss, didn’t test very well at the combine and is likely to be a day three pick in the NFL draft. I think he might have the makings of a roster clogger – the kind of player who will produce just enough as the third receiver on a team that you can’t drop him, but doesn’t score consistently enough for you to start him.

That’s it for our three-round mock draft! The next one that I’ll run will be on day three of the NFL draft. We will tweet the picks out live as they happen and then have a write-up posted a few days later. Good luck as you prepare for the draft!