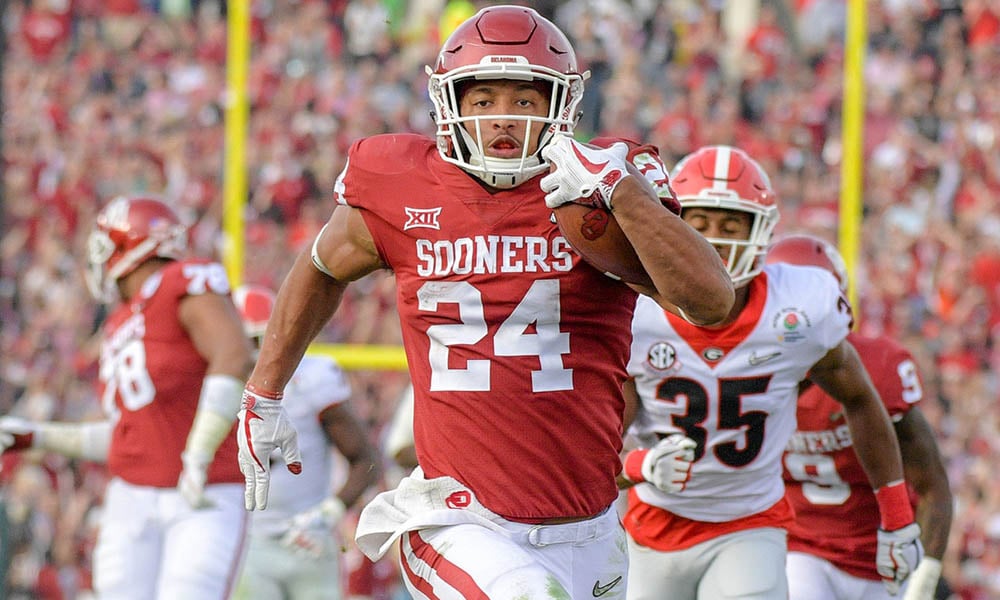 What If? Dynasty Rookie Mock: Round Two

We wrap up our What If? rookie mock with round two.

With the 2018 NFL season now complete, it’s officially Draft Season. Over the next few months, mock drafts will be as plentiful. One of my favorites is the recurring full seven rounder compiled by Bleacher Report’s Matt Miller, who just released his first marathon mock.

I will use this mock to create my own mock, a two-round dynasty rookie mock, based on the assumption that Matt will nail every one of his picks. Obviously that won’t happen, but part of the off-season is speculating about a player’s value depending on where he lands in the draft.

Remember, all picks are simply predictions by Matt, based on the most recent news and team needs.

Although Oklahoma’s Anderson, who battled injuries throughout his college career, falls to the fifth round of this NFL mock draft, the landing spot is certainly interesting. The Texans have seemingly been looking to replace longtime starter Lamar Miller for years and this could be their chance. Anderson is one of the most talented backs in the incoming class and will prove to be a bargain if he can stay on the field.

This is a dream landing spot for Iowa’s do-it-all tight end Hockenson, who has overtaken his teammate Noah Fant as the favorite to be the first tight end selected in the NFL Draft. It remains to be seen if future Hall of Famer Rob Gronkowski will return in 2019 but even if he does, it is evident the Patriots need to consider their future at the position and Hockenson should be ready to slide right into that role as an above blocker and pass catcher.

Speaking of Fant, he is next off the board after falling to the top of the second round to the Arizona Cardinals. For many years and through multiple coaching regimes, the Cardinals have proven to be a tight end wasteland but that could change with offensive-minded head coach Kliff Kingsbury. Fant is likely to be a trendy pick regardless of which NFL team selects him and he should dominate the upcoming NFL Combine.

The Ravens continue to look for answers at the running back position. Many thought Alex Collins had that starting role locked up but early-season struggles led to another year of a lackluster Baltimore backfield committee. There is no doubt that the Ravens will use this draft to upgrade their backfield and any rookie runner landing with this team is likely to see a bump in value.

In a talented backfield and overall offense, Weber was somewhat overshadowed in his final season at Ohio State. Being selected in the top 100 players and landing with one of the teams sporting the biggest need at running back in the league would change the current feelings around Weber.

Like the Ravens, the Eagles have been looking for the right fit to lead their backfield for a few years, most notably trading for Jay Ajayi during the 2017 season. Ajayi again dealt with injuries and now enters free agency, leaving the Eagles with little to count on. Any rookie back landing with Philly should see a value spike and Holyfield, the tough runner with the famous name, is no exception.

Snell is another second-tier back whose value will depend largely on the team he lands with. In this case, Miller projects the Bears to use their fourth-round pick on the productive SEC back. There has been some speculation that the Bears could move on from Jordan Howard this off-season. If that happens, Snell likely climbs the board but if not, this pick would be a reach.

The Bengals have seemingly had enough to Tyler Eifert and his injury woes, which is unfortunate but understandable. In this mock draft, Cincy and new head coach Zac Taylor adds Alabama tight end Smith, who has also been drawing some first-round buzz. Smith has gotten a bit lost in the shadow of the Iowa tight ends, which could make him an excellent value in the mid to late-second round of rookie drafts.

Yet another murky running back situation is the Miami Dolphins. Kenyan Drake and the Ravens’ Collins have been linked and compared in dynasty value after both posted late season breakouts in 2017. Unfortunately, both disappointed in 2018 leading to potential draft picks like this. As a fifth-rounder, Williams would obviously not be handed the starting job or even a significant role but with a new coaching staff, there is concern about Drake’s value.

Georgia wideout Ridley, brother of Atlanta’s Calvin, has become a hot topic already in the dynasty community. While many see a player with all the traits to succeed in the NFL, others see a player who failed to make an impact on the college field. While I lean towards the latter group, dynasty owners can’t ignore a top 50 pick on an up-and-coming offense. This might actually be too low for Ridley in the scenario.

Ohio State’s Campbell is expected to show off at the NFL Combine, likely running the top 40-yard dash time of any receiver. We’ve seen in the past how NFL teams’ decisions are impacted by Combine performances so Campbell landing in the early portion of day two is a very real possibility. With that said, it is hard to be excited about the landing spot, especially after the Jags added speedster D.J. Chark just a year ago.

This mock draft ends with another Jaguar and a former Nittany Lion, running back Sanders. He’s currently packed in the second tier of backs but this landing spot is not ideal, assuming Leonard Fournette remains in Jacksonville. There is a real opportunity for a second back in this rotation as T.J. Yeldon and Corey Grant are both free agents and unlikely to remain with the team.

Latest posts by Ryan McDowell (see all)
What If? Dynasty Rookie Mock: Round Two