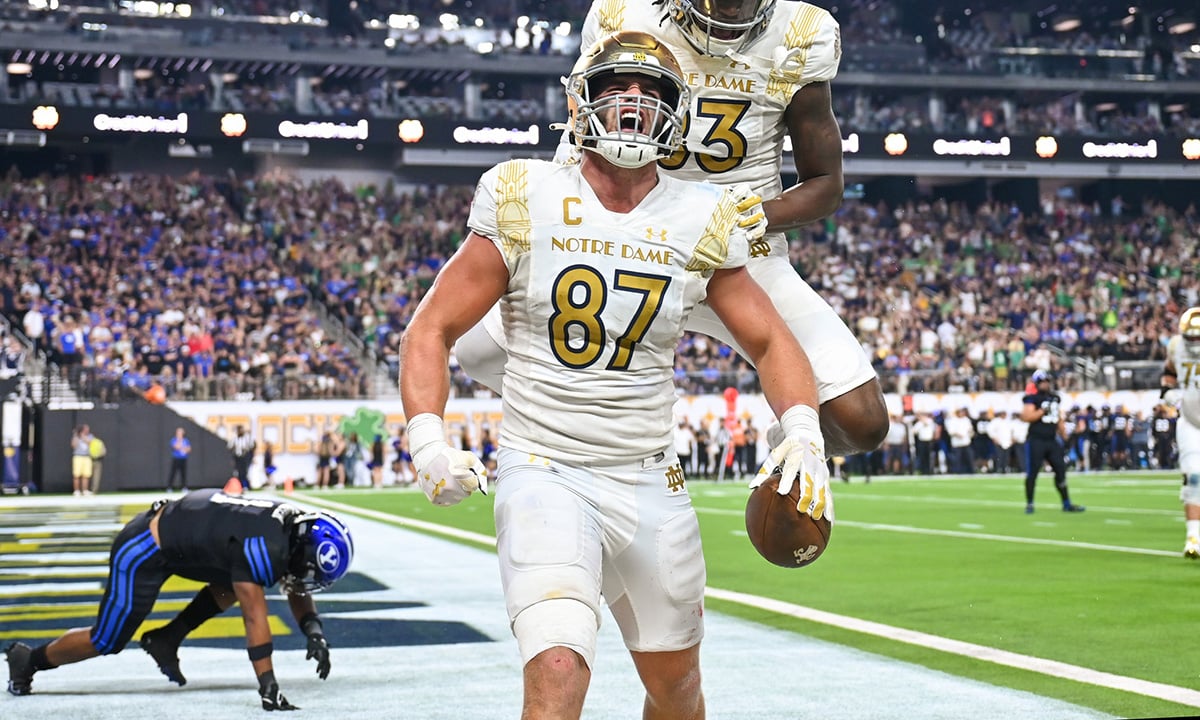 What type of tight end is Michael Mayer and how will he help your dynasty teams?

The tight end position needs to be addressed on your dynasty team. TE has historically been my favorite position to scout and dive into. A lot of questions are answered following the NFL Scouting Combine, but for now we have a foundation to build on, utilizing college stats and film… or highlights, if that is your thing.

Michael Mayer is 6’4”and the presumed TE1 in the 2023 NFL Draft. He was a four-star recruit and was named Kentucky’s Gatorade Football Player of the year (2019). He is pro-ready and looking to make an impact on the field immediately.

He is getting round one NFL Draft buzz. He has been mocked to the Packers (15th pick), Buccaneers (19), Chargers (22), and Bengals (28) from what I have found. The NFL Mock Draft Database has him ranked 17th overall.

Stepping on the football field and contributing immediately is always a good sign. Mayer was tied for the most receptions for Notre Dame as a freshman and second in receiving yards. Here are his collegiate stats:

He dominated his last two seasons, finishing with 138 receptions and 1,649 yards over 24 games. In the final season he finished first in touchdowns, second in receptions, and third in receiving yards among tight ends.

Back-to-back 800-yard seasons with at least 67 receptions is eye-opening. For reference Travis Kelce, TJ Hockenson, or Pat Freiermuth never had an 800-yard season. Mayer finished his career third in receptions for the Fighting Irish.

It does feel like he has been overshadowed in the collegiate tight end spotlight by Brock Bowers. Mayer’s collegiate career should not be overlooked – he was great for three years at a position in dynasty that is hard to lock down.

These were notable tidbits I took from watching a YouTube highlight video. For a complete breakdown of Mayer, check out his NFL Draft Buzz report. There are notes on how he had a limited route tree and will need to expand to become a well-rounded tight end.

You may have heard the statement, “tight ends take time to develop” or another iteration. I think it is foolish to buy into the blanket statement.

Mayer will not break away and score the 80-yard touchdown like Noah Fant. He will be able to be the possession, big body, and contested catch-type tight end. A comparison in my mind comes to Jason Witten – who only had 7% of career games with over 100 yards receiving.

The SparkNotes to this section: if Mayer is able to land in an ideal situation and be a top target on the team, he has the chance to be an immediate starter for you. He has the size and ball skills to be a possession-type tight end and can be staring down the barrel of five receptions a game. His red zone threat will be an added bonus.

All of that said, the NFL seems to be shying away from the type of tight end Mayer is. I had this criticism with TJ Hockenson. Then he got traded to the Vikings and his situation changed – only when his team exploited his strengths.

We currently have Mayer ranked 11th overall in superflex leagues. You may see him fall in drafts simply due to the volatility of the position. He has the potential to be a cornerstone player for your dynasty rosters – a start and forget guy at tight end, compared to weekly streaming,

The main factor will be landing in a desired situation where a team can utilize his talents. We would like to see him be a top-two target. He could be a red zone threat but we cannot be reliant on touchdowns with the tight end position. To finish the Witten analogy, at age 22, he was second on the Cowboys in targets when he got 122. We are hoping for a situation where Mayer is featured in the offense, not just a third or fourth option.

As mentioned, there are questions I want to be answered from the combine and draft capital. For now, I am wheels up with Mayer. It should be noted there is tight end talent to be found in this draft class. Taking him with a first-round selection could be worrisome. However, if he is the only tight end with first-round draft capital, that will be meaningful.

Corey Spala
Contributor at Dynasty League Football
Corey studies human behavior and analyzes data for a living and applies it to dynasty football. He utilizes a blend of data and humor to guide you through articles and/or videos. Shoutout to the process and shoutout to (hopefully) helping you in your dynasty leagues.
Latest posts by Corey Spala (see all)
2023 Dynasty Rookie Early Look: Michael Mayer, TE Notre Dame

Where would you put him in TE premium superflex rankings?