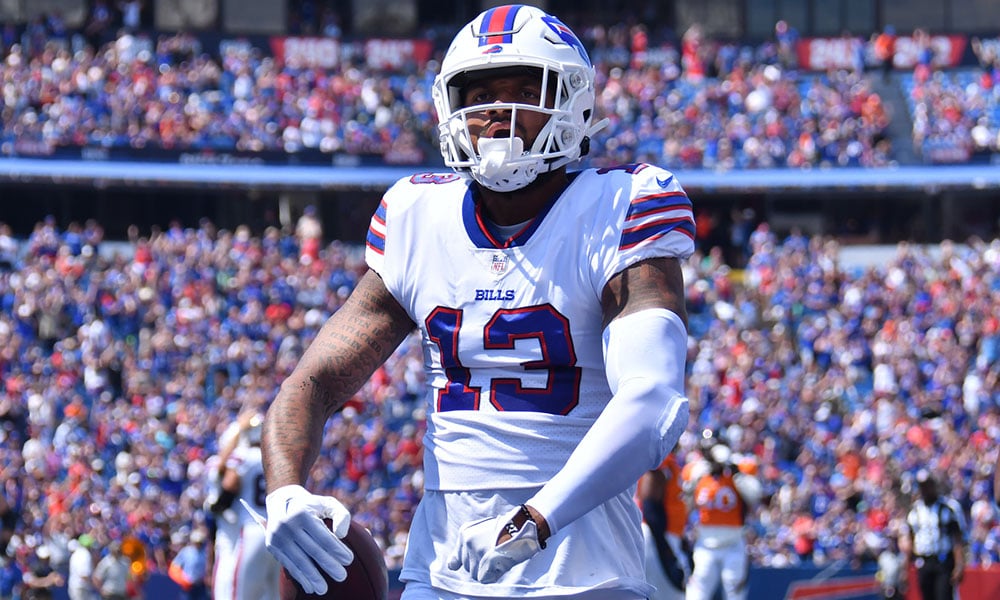 Who have been some players on the move in the most recent superflex ADP?

We will avoid the no-brainer changes each week, such as Trey Lance. We all know he will be tumbling down everyone’s board. Instead, we will focus on the more subtle shufflings amongst the ranks.

Don’t look now, but Jones is currently sitting as the QB13 on the season (QB14 in points per game). He finally appears to be healthy and is using his legs once again. He ranks fifth at the quarterback position in rushing yards with 437, only three behind the more highly-touted Jalen Hurts and just 46 yards behind Josh Allen.

The touchdown passes leave a lot to be desired, but with the injuries suffered by the receiving corps and the tight end group, we should expect nothing less. The encouraging stat is the minimal number of interceptions (four) and fumbles (two). Jones is taking care of the ball and doing what he can with what he has to work with. Wan’Dale Robinson, Daniel Bellinger, and even Sterling Shephard were all making plays for the Giants pre-injury.

Savvy fantasy managers are catching on, as shown by the November ADP data. The 25-year-old is being drafted higher than he has been in nearly two years. Imagine what he can due in 2023 with a full complement of pass catchers. Saquon Barkley is a free agent after the season. The Giants would be wise to continue to build around an elite talent. Looking at the data, we see that Jones is much better when he and Barkley are on the field together. The rushing stats across the board are actually better for Jones when his star back suits up. New York has the fourth most cap space available for 2023 ($59 million plus) and nine draft picks (including two third-round picks). Look for them to improve their skill positions with that capital.

With the news of Zach Wilson being benched, we can quickly move Jones ahead of him. I am comfortable with him in front of Jared Goff, Kenny Pickett, and Mac Jones.

There is no denying the talent here, but at some point, we have to consider that Swift is not a lead back. Injuries have slowed the former 35th overall pick from the 2020 draft. He has played in just 33 of 43 games during his first three seasons in the NFL. The goal-line work also clearly belongs to Jamaal Williams.

Swift only has eight red zone carries compared to 34 for Williams. Granted, Williams is a free agent after this season, but we would have to think Detroit will want to bring him back on a team-friendly deal for at least one more season. That would significantly hinder Swift’s short-term value, as it has thus far in 2022. Even more concerning is that Justin Jackson saw more snaps than Swift in week 11. There was no listing on the injury report, so by all accounts, Swift is fully healthy. Were it not for a garbage time touchdown, Swift would have produced a paltry 6.2 points in PPR formats and an even worse 3.2 points in standard formats. We would be comfortable moving several backs ahead of Swift. These players include Kenneth Walker, Saquon Barkley, and Travis Etienne, to name a few. We cannot rely on a name to translate to production this high in the ranks. We need to see the proof in the pudding this high up.

The cream stayed at the top, as expected. Justin Jefferson, Cooper Kupp, and Ja’Marr Chase all did their thing and will continue to do so, hence the positioning up at the top. We have a wideout who should probably jump into the WR2 range after three weeks of play.

While not a model of consistency, it is fair to say that Davis has as much upside every week as some of the top names in the game. That was evidenced by the 30.6-point performance in week five versus the Pittsburgh Steelers. Davis also currently sits as the WR24 in PPR formats. The chart above shows how volatile Davis is but simultaneously illustrates how capable he is of popping a big game for you week in and week out. We are not comparing the Bills wideout to the great Justin Jefferson and Ja’Marr Chase; we are simply demonstrating that upside exists. Davis has done more with less historically than the two dynamic receivers mentioned. Perhaps all that is needed is more opportunity. We may not see those chances with Stefon Diggs in town until at least 2024, when the guaranteed money runs out on his contract. In the meantime, Davis is worthy of a WR2 ranking with a weekly WR1 upside. Looking at the 2022 game logs, we can see that the youngster takes advantage of the plus matchups but struggles against better defenses. That should improve with time and experience.

Move Davis in front of Michael Thomas, Elijah Moore, and probably even Keenan Allen (age, injuries) at this point. The ranking for Moore may be on the mend with the demotion of Zach Wilson. However, that is something that won’t be determined for at least a few weeks.

The tight end position will be right behind the running backs regarding their rank volatility. With the scarcity of the position, we are always on the lookout for the next big thing. Perhaps a chip off the block is the answer for 2022.

Looking back, we have to wonder if Waller deserved to be ranked as high as TE5. Hindsight is always 20/20, as they say. There were signs. Davante Adams came over from Green Bay, resulting in an instant shift in target share before a preseason snap was even handled. Age was another warning sign we should have heeded.

The box scores from week one and week two seem impressive until you realize that in week one, the veteran only saw a 10.3% market share despite playing 84.5% of the snaps. This was and is a Derek Carr-Adams team that will ride or die for 2022. To be fair, we could not have known that Waller would be slow to come back from injury and questioned about his desire to get healthy. Waller peaked in 2020 at age 28 and dipped from 17.54 PPR points to 12.14 in just one season. The tight end position is not great, but younger prospects with upside should have been the players we targeted in startup drafts and trades. Again, hindsight.

One could ask, at what other position would we take a player who finished 17th at their respective spot the prior year and turn around and rank them sixth? We sometimes get blinded by past production and overlook other obvious warning signs. Learning from these nuances is how we grow as fantasy managers.

Dallas Goedert and Dalton Schultz are two easy ones. An argument can easily be made to put David Njoku and Cole Kmet ahead of Waller as well due to semi-breakouts being had by the youngsters.

He graduated from SUNY Alfred State in 2015 with a bachelor's degree in Technology Management. When he is not writing or playing video games, Jeff spends time with his wife Naomi and their Bichon Poo, Daisy.
Latest posts by Jeff Smith (see all)
Dynasty Superflex Fantasy Football Rankings: Movers and Shakers