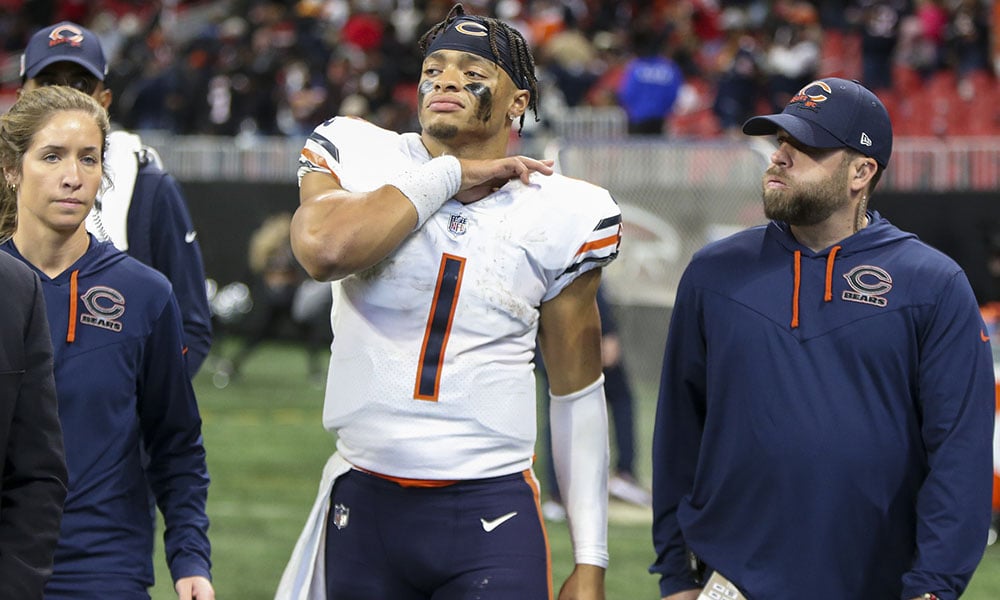 What were some of the key dynasty injuries this week? Which injured players could be returning?

Reminder, we have three games on Thanksgiving Day so set your lineups early. And have a great Thanksgiving, everyone!

Fantasy Impact: Fields has suffered an AC separation, which is a higher grade AC joint injury that does not necessary require surgery (and is different than a shoulder dislocation, which can often lead to surgery if the labrum has torn). Fields does have a chance to play this week, but we also have to consider the Bears bye week is week 14 so the team could choose to hold him out until after the bye week. I do believe, either way, that we will see Fields return this season and for fantasy playoffs.

Fantasy Impact: Murray theoretically could return soon after being a game time decision the last two weeks, however a report surfaced that the team may elect to hold him out this week again and return after the bye week for a week 14 return. We’ll have to wait and see what they choose to do.

Fantasy Impact: Mixon is in concussion protocol and will have to clear all steps in order to play in week 12. Stash Samaje Perine just in case.

Fantasy Impact: Fournette is expected to be able to play week 12, though a report recently surfaced that the team may consider keeping rookie Rachaad White in a prominent role. White should be a must add or acquire.

Fantasy Impact: Edwards likely returns for week 12, but unsure of his rep range with Kenyan Drake playing well and JK Dobbins on the verge of returning soon. This will likely remain a messy committee.

Fantasy Impact: Edwards-Helaire will miss several weeks with a high ankle sprain. It doesn’t sound like the team will place him on IR, but if it is severe enough they may wind up doing that. He has fallen from fantasy football grace, and now the door is wide open for Isiah Pacheco (though Jerick McKinnon continues to get the passing down reps).

Fantasy Impact: Warren’s availability is in question due to a hamstring strain. If he is out, Najee Harris should continue to get majority of the touches.

Fantasy Impact: Edmonds suffered a high ankle sprain after receiving two touches and will now miss an extended period of time after being placed on IR. Latavius Murray slots in with solid value as Denver’s RB1.

Fantasy Impact: Carter suffered a chest injury in this week’s game, but isn’t expected to miss time. If snaps are reduced, I would expect Ty Johnson to remain involved alongside James Robinson.

Fantasy Impact: The Rams lost the one game they were projected to win over the next five weeks, so I do believe Kupp will most likely not return this season.

Fantasy Impact: Jeudy may have a chance to return soon, and the Broncos sound optimistic that he will be able to play this week. Keep an eye on his status.

Return to Play: Thanksgiving game or after

Fantasy Impact: I keep getting questions about when Jameson Williams might return from IR. I think we could see him play after the Thanksgiving game.

Fantasy Impact: Williams returned but quickly aggravated his high ankle sprain after landing and twisting on his right ankle on a great sideline catch. I do believe he will have a shot at returning, but most likely misses 1-2 games to get closer to 100% without reinjury risk. With Keenan Allen back and Joshua Palmer playing well, no need to rush him back.

Fantasy Impact: Chase will be practicing this week with a chance to return to play, but we’ll have to wait and see how practice goes. There is also the risk that if he has any symptoms or setbacks in practice, they will shut him down for an extended period of time. Let’s hope for good practices here.

Fantasy Impact: Most likely, Arizona holds Moore out until after the bye week to give him extra time to heal from the groin strain he suffered this past week. Plan to be without him for week 12.

Fantasy Impact: My guess is JuJu returns for this week’s game off of concussion protocol.

Fantasy Impact: Another Cardinals player who we will have to wait and see on considering the team’s bye week approaching. I do believe Brown will be ready to play for week 12, but let’s see if the team activates him and gives him snaps.

Fantasy Impact: Robinson’s season is now over. Given the timeframe, there is a chance he can be ready for the beginning of 2023, but most likely around mid-season.

Fantasy Impact: It’s a miracle that Pitts only tore his MCL, as he was forced into extensive hyperextension. It would not surprise me if he also had a meniscus tear, but I’m just glad it wasn’t ACL here. Reportedly he will be getting a second opinion on his knee, but he most likely winds up getting surgery and is out for the 2022 season.

Fantasy Impact: Njoku returned but was out-snapped by Harrison Bryant. There were no reported setbacks, so I would expect him to play more snaps and be more productive for week 12.

Fantasy Impact: Bellinger is likely close to returning, most likely over the next few weeks here. He has already been ruled out for week 12.

Jeff Mueller
Contributor at Dynasty League Football
Jeff is a Doctor of Physical Therapy with a specialty as a Certified Speed & Agility Coach. He enjoys outdoor activities such as hiking in Yosemite with his wife and dogs and has been an avid football fan since birth (go 49ers!). He also firmly believes that everyone needs to invest in a home gym with multiple TVs to watch all of the games on Sunday while working out.
Latest posts by Jeff Mueller (see all)
Dynasty Fantasy Football Injury Report: Week 11

Just curious, but what would the benefit be of getting a second opinion for Pitts? What could he (or the team) possibly hope to hear (or not hear)?