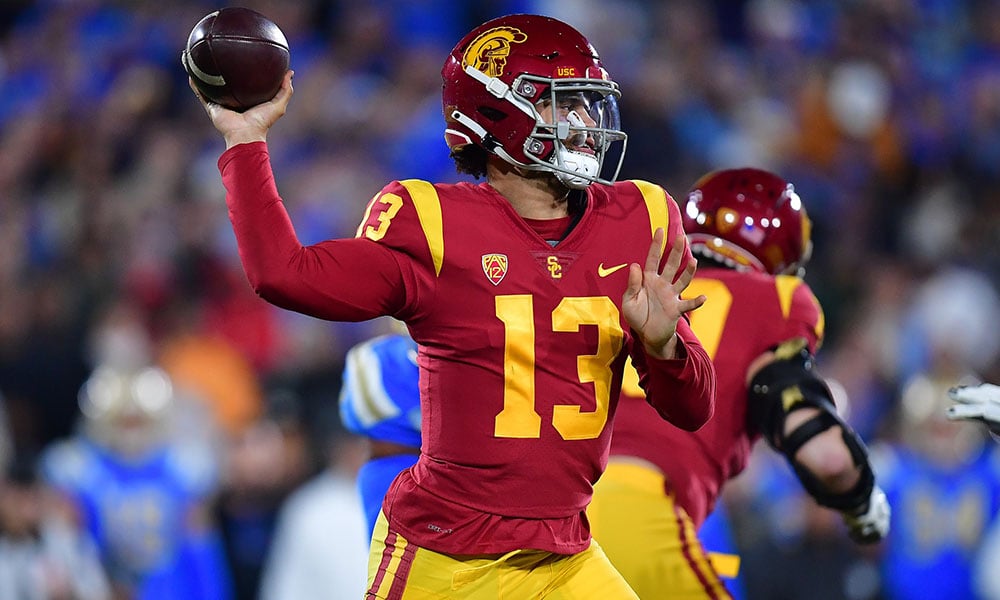 Who were the most notable performers in college football over the weekend?

Last week’s slate of games exceeded expectations. We came close to a few upsets. Michigan, Ohio State, and TCU were on the ropes in their games before pulling out the win. Tennessee got blown out by South Carolina. We also saw North Carolina and Ole Miss fall to unranked teams.

Next week is one of the most anticipated weeks of the college football season as the schedule is packed with rivalry games. Below are some of the best games for week 12.

Williams is easily one of the best quarterbacks in college football. He will easily be a first-round draft selection in the 2024 NFL Draft. We saw him make some tough throws on Saturday night against UCLA. The sophomore quarterback completed 32 of his 43 pass attempts for 470 yards and two touchdowns while also rushing for 33 yards and one touchdown.

Rattler is trying to build his draft stock after having a nightmare performance last season. He was dealing on Saturday night against fifth-ranked Tennessee, completing 30 of his 37 pass attempts for 438 yards and six touchdowns. We saw him make some big-time throws against one of the best defenses in the country which led to South Carolina upsetting Tennessee 63-38.

Robinson is a cheat code. There’s not a game where he makes one of the top highlights in college football. He’s always a threat to make the big play. We saw him run through Kansas in week 12, rushing for 243 yards and four touchdowns while averaging 9.7 yards per carry.

McIntosh is another running back who will leave a mark in the 2023 NFL Draft. He had his biggest game of the season against Kentucky, rushing for 143 yards and one touchdown. This was his first 100-yard game of the season. Dynasty gamers should expect to draft him in the latter rounds of rookie drafts this off-season.

In a game where Auburn decimated Western Kentucky 41-17, Bigsby rushed for 110 yards and two touchdowns. He is currently averaging 4.4 yards after contact per attempt with 57 missed tackles on the season. Bigsby is going to be a trendy option in rookie drafts in 2023.

Hayden has rushed for 248 yards and four touchdowns in his last two games. He looked very good against Maryland last weekend. The four-star freshman consistently found the running lanes and looked explosive in the open field. He has been stepping up since both Miyan Williams and TreVeyon Henderson are dealing with injuries.

Brown is going to flirt with being a second-round rookie pick in 2023. He is currently college football’s leading rusher with 1,585 yards. Against a tough Michigan defense, he was able to churn out 140 yards and two touchdowns. This was his tenth 100-yard performance of the season. Dynasty gamers are going to be watching him this off-season during the combine and on draft day to see how they should value him in rookie drafts.

Corum had an injury scare in this game but was able to come back and perform. It was another game where he dominated on the ground rushing for 108 yards and one touchdown while also catching two passes for 39 yards against Illinois. He has elevated his draft stock to the point where people are going to be valuing him as one of the top running backs in next year’s draft class.

Singleton blew the doors off when he took back a kick return 100 yards for a touchdown. His blend of size and speed makes him the best freshman running back in the country. We are going to see him have a huge career at Penn State.

Allen is a very underrated running back prospect. He has 748 yards and nine touchdowns on the season. If it wasn’t for Singleton being on the team, people would be talking about him more. He led the team in rushing last weekend against Rutgers with 117 yards and one touchdown on 11 carries.

Ibrahim has 1,534 rushing yards and 19 touchdowns the season. He is the only power five running back with over 1,000 yards after contact. After tearing his Achilles last season, he has proven that he is more than ready to handle the load for an NFL team. In a losing effort against Iowa, he rushed for 263 yards and one touchdown. He has rushed for 100 yards in every game this season and he has surpassed the 200-yard mark twice.

Sanders is going to be one of the top running backs in 2024. He has a blend of size and speed that will make him a star at the next level. In a game where all of the running backs combined for 798 rushing yards, Sanders led the charge, rushing for 232 yards and three touchdowns. He ranks 12th in the country with 58 missed tackles.

Judkins came out of nowhere to become one of the top running backs in college football this season. If he continues to progress, he will be a top-shelf dynasty asset in a few years. On the season he is averaging 3.42 yards after contact per attempt with 71 missed tackles. In week 12, he led Ole Miss with 214 rushing yards and one touchdown.

Judkins’ productive freshman season is going to make Evans a major discount in drafts this off-season. He has the size-adjusted speed to be a difference-maker at the NFL level. Evans had a big performance against Arkansas, rushing for 207 yards and one touchdown on 17 carries.

Brown posted his best performance of the season against Georgia on Saturday. The freshman caught ten balls for 145 yards and one touchdown. He owns a 23.28 percent market share of Kentucky’s passing production and leads the team with 560 receiving yards.

TURN IT UP! 😤 @uscfb pic.twitter.com/jIHt2eF0jX

Addison will be a first-round rookie draft selection this off-season. The fact that he has been productive at both Pitt and USC speaks to how quickly he can transition with a new team. He blew up against UCLA, catching 11 balls for 178 yards and one touchdown. Look for him to do big things at the NFL level.

Nabers is a wide receiver prospect who can make big plays. He leads the team with 51 catches for 657 receiving yards while owning a 24.32 percent market share of LSU’s passing production. He had his best performance of the season against UAB when he caught seven balls for 129 yards.

The five-star freshman caught two touchdown passes against New Mexico State last weekend. Burden is having an up-and-down season but is still looking like one of the best young talents in college football. Devy gamers might want to give him some time to marinate because he has the potential to develop into a top-tier prospect sooner than later.

Kincaid leads all tight ends with 748 yards and seven touchdowns. He is averaging 2.39 yards per route. Against Oregon, he caught 11 balls for 99 yards. His performance led all tight ends in receiving for Week 12. With that being said, we did not see a tight end break 100 yards for the week.

RELATED VIDEO
Enjoyed this video? If so, please be sure to LIKE this video and SUBSCRIBE to our channel for more awesome, FREE analysis all year long!
Bruce Matson
Contributor at Dynasty League Football
I'm a financial counselor for a hospital in South Central Ohio. I graduated from Muskingum University with a bachelor's in business while minoring in Economics and Accounting. I won my first fantasy football title with Jake Plummer as my quarterback.
Latest posts by Bruce Matson (see all)
Devy Fantasy Football Wrap-Up: Week 12