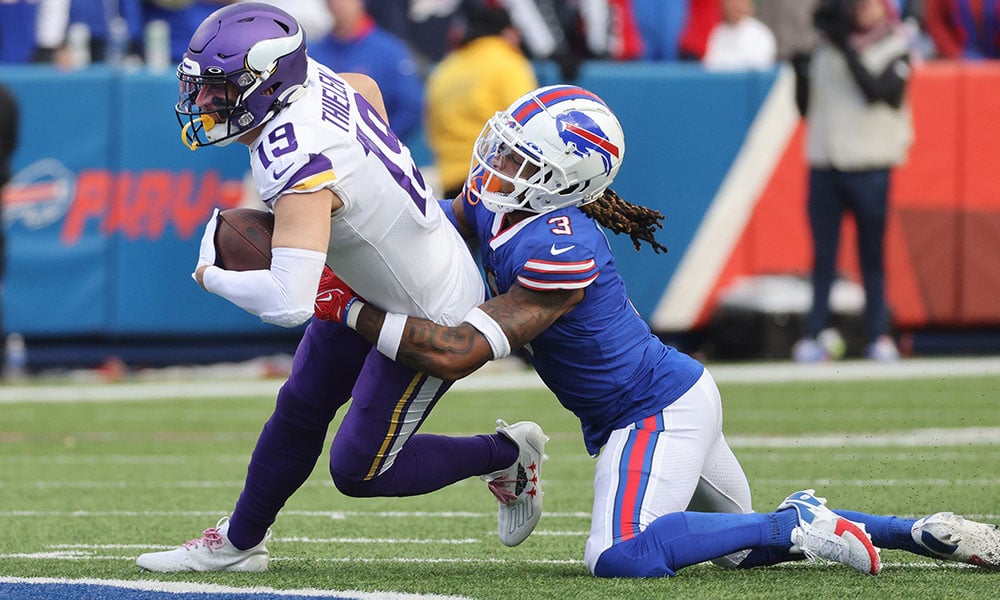 We pick out some notable IDP numbers.

At this stage of the season, the fantasy playoffs are right around the corner. Your IDP scoring in those has very little to do with season-long totals. It’s all about health and availability and role right now.

1. Aaron Donald is currently ninth among interior linemen in pressures

Donald is still an elite player – one of the best in the NFL.

But at 31 years of age (he’s 32 in May), and having flirted with retirement before, the gap between him and his peers has shrunk. There are a handful of other players at his position who can claim to be very nearly the player he is. Dynasty is fun, and we all love our favorites, but Donald has been a sell opportunity for a while now.

Interestingly, he’s also a buy opportunity. If you can get a decent value, then he can definitely help you with your title push this season.

2. Maxx Crosby has 25% more tackles this season than any other edge player

Crosby is on 39 solos, and nine assists for a total of 48. DeMarcus Lawrence has 30 and six (36). That’s a very considerable lead at the top, and it’s why Crosby is the top-scoring edge in the game so far this season.

This is super interesting because it’s so different from 2021. Last season he led the NFL in pressures (although he could not convert them into sacks enough for us). This year he’s been a tackling machine, but he’s ‘only’ tied for 13th in pressures at his position.

3. Bobby Okereke has played 555 defensive snaps and is yet to record a single pressure

The LB with the next-most snaps to have zero pressures is Jayon Brown, who has played just 256 (well under half Okereke’s volume).

This is largely down to opportunity. Okereke has only been asked to blitz on 12 snaps all season long – that’s 2% of snaps. He blitzes about once every 46 snaps. It’s more efficient for LBs (on the whole) to play coverage than rush the passer, but a big fat zero like this is very annoying.

Similarly, it’s more efficient to invest your money in everyday items than buy lottery tickets. But that does mean your chance of hitting the jackpot is virtually non-existent.

4. Lions corners have racked up 149 total tackles this season – the average for the NFL is just 114

So, Lions corners have racked up about 30% more tackles than average. This is significant.

It’s not purely that the players in question are awful. Amani Oruwariye, Mike Hughes and Will Harris have all been predictably bad, but Jeff Okudah has been average this year (which is huge progress).

At the same time they are allowing 7.4 yards per passing attempt (worst in the NFL), and points on 45% of offensive drives (also worst in the NFL). They just can’t stop teams.

5. Over the past three weeks, Bills safety Damar Hamlin leads all safeties with 31 tackles

Second over that period is Budda Baker on 26. Averaging over 10 tackles per game and recording a tackle efficiency of about 15% is impressive, to say the least.

Hamlin’s opportunity will dry up when Jordan Poyer is back (and he was back in practice this week, but who knows what could happen.

Mainly he’s just a good reminder that safety is about finding volume and lucky streaks over the short term. It is absolutely not a position you should be investing in long-term.

The reasons for this are clear. They simply can’t stop the rush. Teams see no reason not to just trample all over them every game. The Texans have allowed 5.2 yards per rush attempt this season. Only four teams are worse: the Lions, Chargers and Giants, who all seemingly have issues stopping the run every single season.

The Texans have allowed nine rushing first downs, over 180 rushing yards and 35 rushing attempts per game so far. All of those metrics are worst in the league.

This is crucial, and we’ve touched on it before in this column – rushing plays hurt defenders, because facing heavy rushing offenses means those defenses play less.

Look at the lists of IDPs by scoring. You’ll notice that very few Texans are right at the top. But they’re facing a ton of rushes. More than any other defense in the NFL. If rushing were good for IDPs, this season would see them being studs. But they are not.

In the time since then, Luvu has played 211 snaps, with Thompson on 394. Luvu has missed two games of course in that period, but even so, he’s averaged around 53 snaps per game to Thompson’s 66.

At the start of the season, Luvu was looking like an IDP breakout stud, for this season at least. But the Panthers have reverted back to what we thought they’d do, by having Thompson as their only full-time LB.

He’s still playing 50 snaps per week, and that means he’s in that (big) second tier of quite-a-lot-but-not-all-the-snaps linebackers who can have good weeks and are useful in deeper leagues. But there are a lot of those guys and arguably Luvu is among the least attractive of those players, because of how much he lines up as an edge.

Tom Kislingbury
Contributor at Dynasty League Football
Being from England Tom only discovered American Football in the late 90s. From there he's gone from casual defender to devoted obsessive and likes to delve into deep data primarily about defensive players. He spends his days trying to pretend the spreadsheets and graphs he makes about football are actually work for his day job. No-one is fooled.
Latest posts by Tom Kislingbury (see all)
Seven IDP Fantasy Football Stats You Need to Know from Week Ten

Great stuff as always Tom. Can I hit you with two teams worth of start/sits? I need 4 for each team, so I need to sit one from each group.
Team 1 – Jewell, LWilson, ZFranklin, FWarner, BOkereke
Team 2 – Roquan, Sanborn, FWarner, Jewell, ZFranklin
Also, which D/ST would you start between: my SF vs AZ or my PHI vs IND?
Thanks!