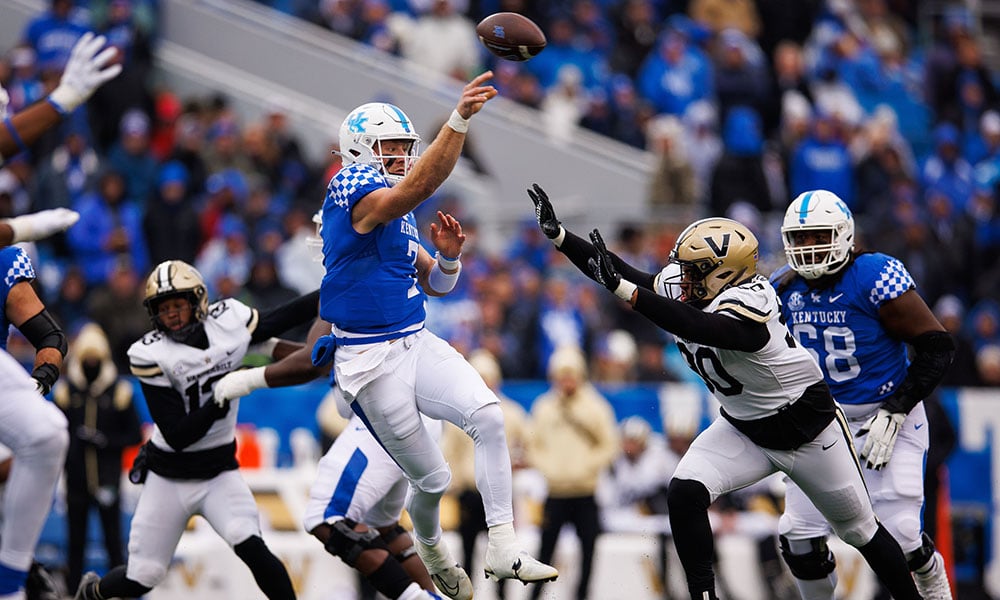 We examine some young players making their mark or losing their way.

Will Levis, QB Kentucky puts up another dud

With his NFL buzz refusing to die, Levis put up another clunker performance this past weekend against a weak Vanderbilt defense. The Wildcats ended up losing the game while Levis threw for only 109 yards and an interception. It was the worst outing of his Kentucky career with a measly 78.94 rating in what should have been an easy defense to dominate. The toolset and pro-style conversion may be enough to keep Levis’ draft stock afloat, but the odds of him becoming a great NFL quarterback don’t look great.

With plenty of depth in the 2023 running back class, there have been many headline-makers. McBride may not have crossed every radar, but he is drawing top 100 NFL Draft buzz and climbing. This past week, he ran through North Texas for 120 yards and three TDs. He has run for 120+ yards in each of his nine games this year, with at least a TD in eight out of the nine. Great vision and contact balance with solid quickness may have McBride leading an NFL backfield next season.

Trey McBride, TE ARI set to get his shot

With Zach Ertz being knocked out for the season with a knee injury, McBride is set to step up as the top rookie TE drafted this past season. McBride’s body control and catch radius are enormous which should be a big help for an active Cardinals passing game. Ertz had a clear role in the offense that McBride should take over one to one. Look for the rookie to explode onto the scene, especially in the red zone, and establish himself for next year.

The hype surrounding Watson coming into the season was big, but things did not go well early. Between numerous injuries and drops this season, it was looking like Watson may be a bit of a bust early in his rookie year. In week 10 against the Cowboys, Watson caught four passes for 107 yards and three TDs. Getting open easily and using his speed to score, he looked like the true top WR the Packers have needed all season. Then he added two more touchdowns on Thursday night. This could be the start of a huge breakout for the rookie.

It seems like Fields makes this article every week, but he just keeps producing. Despite the Bears’ third straight loss, Fields is carrying the offense on his back and flashing Lamar Jackson-like abilities. He threw for two TDs and ran for another two against the Lions racking up 147 yards rushing in the process. With an offense tailored to his strengths, there is hope for Fields to be a top fantasy QB. The next stretch of games have some tougher defenses to face, so we will see if he keeps it up.

After being traded to the Chiefs, there was some optimism that Toney could regain what made him a first-round talent. He definitely flashed out of the gate against Jacksonville as a key weapon early in the game. Ending with four catches for 57 yards and a touchdown, along with a punt return TD and a few big runs, Toney looked like a real offensive weapon. Expect more usage moving forward.

Shane Hallam
Contributor at Dynasty League Football
Shane has been analyzing and writing about the NFL Draft and fantasy football for over 15 years. He is currently a Managing Partner at DraftCountdown.com and co-host of the Devy Marketplace Podcast. He was the winner of the "Top 100" contest at Huddle Report in 2015 and 2020 in predicting the NFL Draft.
Latest posts by Shane Hallam (see all)
Dynasty Fantasy Football Rankings: Cornerstone Report, Week 12