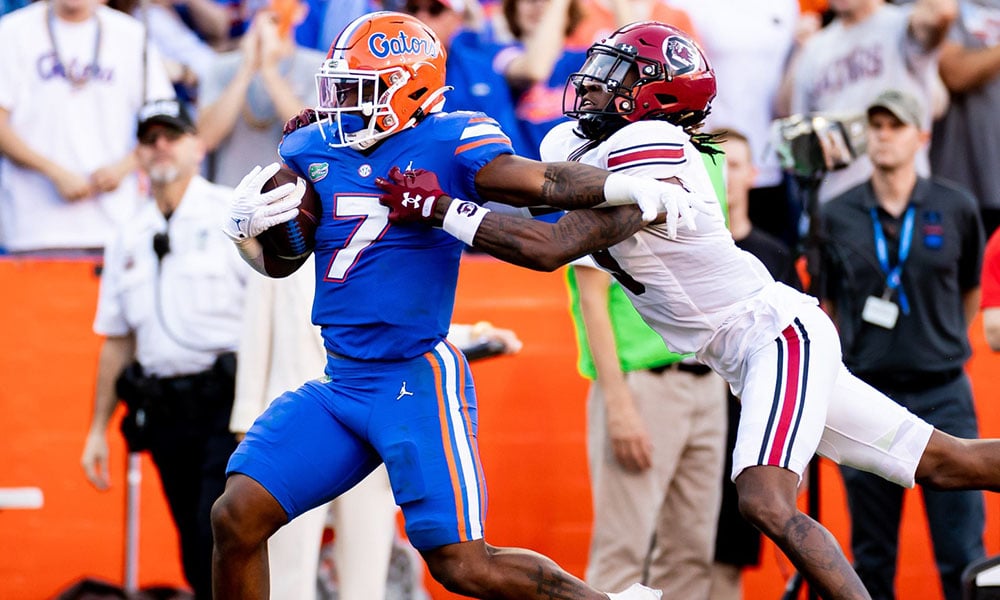 We round up some risers and fallers in the devy world.

In recent seasons, we have seen plenty of late bloomers at the quarterback position. Joe Burrow thrived once he got an opportunity at LSU. Zach Wilson vaulted to the top of his draft class following a strong final season at BYU. After seemingly three decades at Pitt, Kenny Pickett broke out and earned a first-round selection with the Pittsburgh Steelers. Is there anyone who fits the bill this year? It just may be the player outlined below.

The book was pretty much written on Bo Nix. An Auburn legacy recruit, he arrived on the plains with much fanfare but proved to be an enigmatic presence under center for a program seemingly always in flux. Nix never averaged more than 7.1 yards per attempt for the Tigers and for every big-time throw he made, he seemed to trade it in for a confounding decision. Any early career hype he had faded swiftly.

It appeared to be much of the same after Oregon got immolated by the Georgia Bulldogs in week one, but since then Nix has caught fire. He has already set a career-high in passing yards and his 9.3 yards per attempt blows past his previous best. Add in a sparkling 24/5 TD/INT ratio, and it is not hard to see why Nix has received Heisman buzz for the 8-2 Ducks. The tools have always been there and we are now seeing Nix play without some of the chaotic moments which defined his tenure at Auburn. He could mix into the second-tier of 2023 quarterbacks behind standouts Bryce Young and CJ Stroud.

Should Move Ahead Of: In DLF ADP, Tyler Van Dyke and DJ Uigalelei sit at QB15 and QB20, respectively. Nix should have lapped these two long ago. You can make a case for him as a top-ten devy quarterback, with fellow Pac-12 quarterback Cameron Ward (QB8) another player he should surge ahead of.

Already a well-respected prospect, Etienne has taken his game to a new level in recent weeks. Etienne – the younger brother of Jacksonville’s Travis Etienne for anyone unaware – has been part of a dynamic one-two punch all season with sophomore Montrell Johnson and has looked every bit an upperclassman despite enrolling in Gainesville over the summer.

Etienne lacks the burst of his older brother because almost everyone on earth does, but he could leave Florida with a much larger frame and more of a power profile. He is pushing 220-pounds early in his career and has a compact frame that allows him to easily eschew arm tackles and finish runs with flair. His burst is also still well above-average; he can get to the second level in a hurry and effortlessly weaves his way through holes in the defense. Billy Napier’s running game was always effective at Louisiana and the early returns at Florida are strong as well. Etienne could have a fantastic career that vaults him into the early rounds of the 2025 draft.

Should Move Ahead of: Other more ballyhooed freshman backs such as Emmanuel Henderson should be falling behind Etienne, and young players living off recruiting hype like LJ Johnson (RB27) should also fall victim to Etienne’s rise.

Jarrett’s first draft-eligible season has not gone the way anyway had hoped. After a strong sophomore campaign which saw him post s 62-829-5 line, Jarrett has fallen back in his junior year, averaging only 11 yards per reception and failing to produce splash plays with the same volume he did in 2021. He has failed to significantly outproduce Jeshaun Jones or Jacob Copeland as the Terps have had five different players pace them in receiving in a game this year.

Fortunately, this is far from simply a Jarrett issue. Maryland’s offense has been up and down all year, including bottoming out in the past two games against Wisconsin and Penn State. The tools are still evident; there are just significant questions as to whether or not they are being developed in College Park. A strong pre-draft process could still land Jarrett on day two, and there is a possibility he returns to Maryland or enters the transfer portal to rebuild his draft stock in 2023. We just have not seen enough from the former five-star recruit to place him in the upper echelon of receivers, a pedestal that looked preordained when he was a recruit.

Should Fall Behind: Where the 2023 draft class has had a disappointing year as a whole, there have still been players in the class or future classes who have worked their way ahead of Jarrett. Zay Flowers and Marvin Mims have pushed ahead in the 2023 class, while Troy Franklin has surged ahead in the 2024 group.

The inclusion of Marshall has nothing to do with what he can do on the field. A huge recruit and massive get for the Aggies, he flashed in a limited sample size and has the tools to develop into an elite weapon for a program. Unfortunately, he has already been suspended twice this year, with the second suspension being an indefinite ban. It is an inauspicious start for Marshall, whose future is all of a sudden in flux. With this many question marks, there is little reason to invest much in devy drafts. The risk factor is incredibly high and has Marshall well out of my top 75.

Should Fall Behind: Marshall should be plummeting at this point. Malik Nabers (WR73 on DLF), Puka Nacua (WR42), Rome Odunze (WR43) and Cedric Tillman (WR35) standout as players who are no-brainer selections ahead of the current and potentially former Aggie.