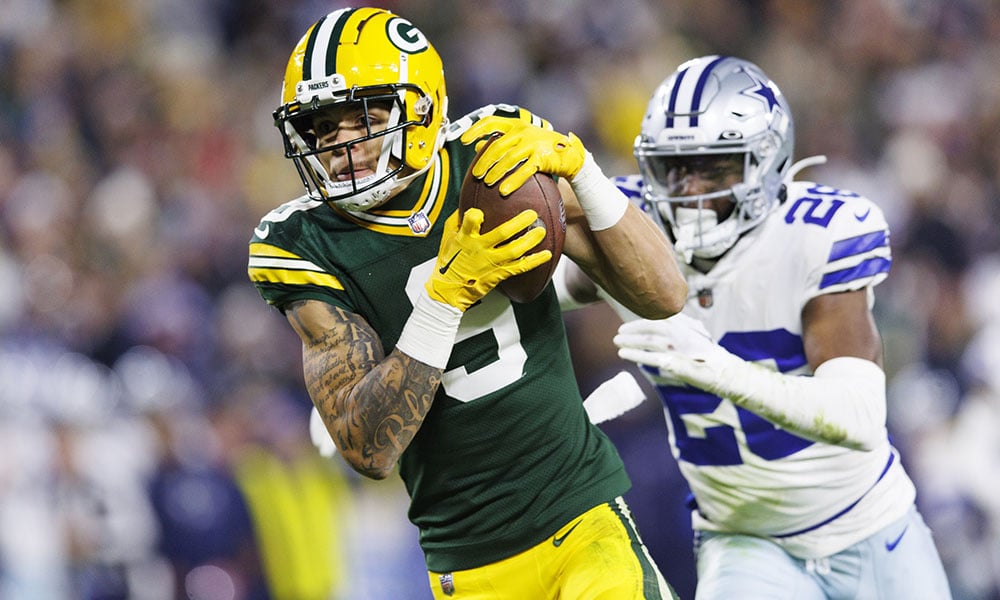 What does the target share data from last week tell us about three offenses that are changing?

There are practical reasons to remain skeptical after one week. “Sample size” isn’t just a thing nerds say. We really can’t know much about the future until it’s almost on top of us. However, I’m hoping you can forgive me for taking one week to try and speculate on the makeup of three offensive situations that have recently changed.

If nothing else, it’ll be fun, right?

But first, as always, here’s your weekly reminder that I’m collecting the weekly data and you can find it here.

Tyler Boyd and Wan’Dale Robinson haven’t played again yet, but I think Paris Campbell’s 20-points game last week highlighted my notes on him. His nine targets vastly outpaced my four-to-six target prediction, however scoring a 35-yard touchdown highlights – for me – his more fragile path to consistent points.

Jerry Jeudy suffered an ankle injury ending any potential for him to continue his increase in this offense. This works well for our earlier season observation on Courtland Sutton, at least, who managed 11 targets (28%) last week in his absence.

DJ Moore continued his higher target share in week ten though failed to produce any as PJ Walker struggled to find success in the passing game, completing just 108 passing yards on 16 attempts.

Let’s save Allen Robinson for this week’s observations because it’s relevant.

Allen Robinson, our “honorable sell” from last week, failed to thrive in his WR2 role even with the loss of Cooper Kupp to a high ankle sprain. Instead, Ben Skowronek had the biggest bump with seven targets (19.9%) although he was only able to haul in just two for 14 receiving yards.

The new-look offense of the Los Angeles Rams is going to be an open question as Robinson, Josh Reynolds, and Skowronek offer a shallow imitation of Kupp’s role.

I think the best thing to do with Rams players right now is… not roster them anymore. But if you are looking for any potentially positive play, I think the best answer might be Tyler Higbee.

Higbee has been the sixth-highest scoring tight end this year (PPG) with the fourth-highest expected points share (EP%) this season already. In the one game we got to see without Kupp, he was also the only other player to see a significant increase in opportunity.

Since this was an unplanned change to the offense during a live game, it’s reasonable to expect a change to week ten’s results after the team has a week to prepare. However, with a baseline opportunity in the top 12, it’s not unreasonable to suspect Higbee is the sole top-end option for fantasy moving forward.

However, without Kupp the team is worse. Take any high points from here on as an opportunity to “get out” of Ram’s players, in my opinion.

Rookies progress at their own pace, it’s true, but most rookies have fantasy relevance in some way in year one. The number of excuses for Skyy Moore ran out for me a few weeks ago. Week ten was more coal on that fire. Marquez Valdes-Scantling is heavily used at a high aDot, but he is a constant threat for a touchdown and a blow-up game, but I think that’s all this was.

Kadarius Toney is a mystery, in so many ways, but his athletic gifts constantly promise an upside and in week ten we caught another glimpse of that potential. Rarely on the field, he was utilized on a route every time his feet touched the grass. I continue to be pessimistic (it’s my nature) especially with very little in college or NFL production (despite a high yards per route run – in a small-ish sample – as a rookie). However, the upside is here.

JuJu Smith-Shuster’s three-game tear for points and target share came crashing halt last week. It’d be easy to give in to despair, or at least see a correlation between Toney’s higher usage last week and Smith-Schuster’s reduction. I will remain hopeful because he continues to perform well on his touches at least (1.9 YRR).

Last week it looked very much like MVS was taking the downfield roll and Toney was growing into a position where targets are more like handoffs close to the line of scrimmage. That combined with Travis Kelce being the clear lead receiver leaves very little for anyone else right now.

It’s just one week, but it’s a reason for Toney truthers to celebrate.

I’ve looked at three-week trends in multiple seasons and something that’s always struck me is that breakout and new offensive changes tend to happen all at once, rather than slowly over time. Things progress, and rookies ease into offenses, but the slow crawl upward is less the indication I’m looking for than a sudden increase that is then sustained.

Christian Watson started by averaging 10.9% targets through the first three weeks then dropped off to an average of 3.7% over the next three. Last week he had a 42% target share and put up 32 PPR points!

Now, even a cursory glance shows us he is still anything but complete as a receiver. He only caught half of his eight targets, on an insanely deep aDot of 20.5. But the team certainly seems to have decided he is ready (enough) to be more involved.

Now, will that sustain well? No – a 42% target share isn’t going to sustain and even his week ten game was full of mistakes and disappointments. However, the potential of his physical gifts (and draft capital) was on display as well.

My main takeaway is that despite Allen Lazard‘s competent performance this year, the team is still short a true dominant receiver. While Watson may not be that player, I think it would be wise to bet on that potential in dynasty.

Much like Toney, if I can get a mid-first value, I’m willing to “sell” – because of their rookie profile risk. However, it’s unlikely too many people are willing to trade 2023 rookie picks right now, so I’m holding and hoping to enjoy a show.

Anyway, that’s about all I have time for right now. Let me know what you think, and I’ll see you next week.

It’s hard to look at Smith-Schuster’s decline in target share as anything other than the fact that he left with a concussion in the 2nd quarter.

I agree, hard to predict what might have happened if he hadn’t been knocked out of the game. Having a hard time personally figuring out JuJu’s value going forward. It looked like he was starting to assert himself as the best non Kelce receiver, but hard to figure out. Was Toney’s increase somewhat due to Hardman missing the game? How much time will there be once all of them are healthy, or with the injury histories here do you just plan on at least one of them being out every week?

I did end and maintain I’ll ride with juju, but the offence has played pretty spread earlier in the season and theres a lot of “potential” in toney ect, so I dont want to completely wipe that away is all