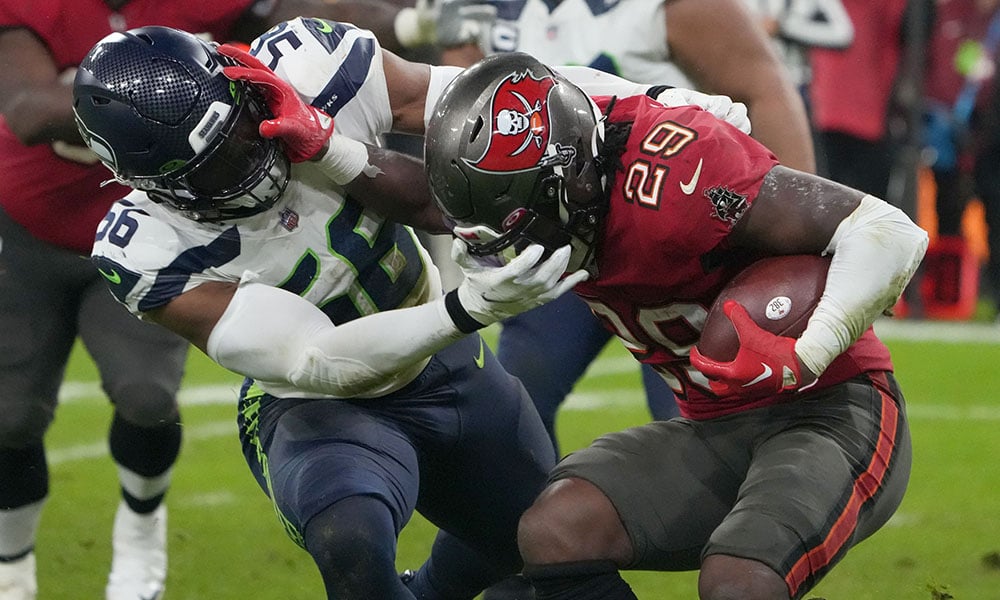 We examine some recent changes in the dynasty landscape.

We are right in the middle of the season, and there have been several developments on the field that will have big ramifications for your dynasty team. Let’s examine a few…

It’s rare to have a changing of the guard be so obvious but that’s what happened in Germany this past weekend. Rookie Rachaad White got the start over Leonard Fournette and proved the Bucs coaching staff right in their assessment by having a career day with 22 carries for 105 yards. Granted Fournette missed most of the second half with a hip injury but no one else came on to spell White. For White’s dynasty managers, his ascension to the starting lineup couldn’t come soon enough. He had totaled just 38 carries before this week and hadn’t shown any flashes of what made him a third-round pick in this April’s draft.

Now the question will be if he keeps the job, regardless of Fournette’s hip injury. The Bucs have a bye this week but there are several dynasty leagues with a trade deadline coming up before Tampa plays again. Now is decision time.

Dynasty Impact: There’s little doubt that White’s dynasty value is going to reach its highest point this week. A starting rookie running back on a team with Tom Brady at quarterback is sure to be in high demand. And while his redraft value is secure, I would have doubts about his long-term future.

The Bucs are going to be in a transition soon with Brady close (maybe?) to retirement and several other players getting up there in years including Mike Evans. There will need to be a reset among the personnel which could also result in a change in the coaching regime. No matter what happens, there are a lot of variables to consider when determining if White will stick around. Currently, he’s on the RB2/3 line along with Fournette. But I would look to sell high on White to a contending team in your dynasty league. Not that you’ll get a first-round rookie pick for him but he has done nothing to show that he’ll have staying power either for the Bucs or your dynasty team.

Kyle Shanahan: I have to trade for the most expensive running back in football, who I will install into the league's most devastating playbook

Kyle Shanahan, fourth down: two yards? how am i supposed to get two yards https://t.co/n10PExEXGu

There was tremendous optimism about Christian McCaffrey‘s fantasy prospects after his surprising trade to San Francisco. Not only had he been healthy thus far after missing most of the last two seasons but he hadn’t missed a beat when it came to fantasy production. He had two 100-yard rushing games through six games as a Panther and was averaging seven targets per game. After his move cross country, he found himself in the middle of one of the best offenses in the league led by one of its best play-callers.

The returns are early but there is reason to be worried about McCaffrey’s production. Not because he doesn’t look like the same old McCaffrey but because there’s only one ball to go around. He’s currently paired with another jack-of-all-trades in Deebo Samuel not to mention George Kittle, Brandon Aiyuk, and more. His first full game as a 49er against the Rams was promising as he totaled 18 carries and saw nine targets. Yet in week ten against the Chargers, he saw 14 carries and six targets. It also coincided with Elijah Mitchell‘s return to the 49er backfield who ended up out-carrying McCaffrey 18-14. Thus the problem of McCaffrey dynasty owners – will he consistently have the same workload as he did before or will he be just one of a large cast of playmakers?

Dynasty Impact: For current McCaffrey dynasty managers, there’s not much to do but keep him and value him as he should be going forward – an RB1 but not THE RB1 like he used to be. That trend had already started thanks to injury and his team prospects but should take more of a turn now that he’s sharing the backfield.

The upcoming off-season will see McCaffrey’s look sunny again as Trey Lance returns and he’ll have had an entire summer to learn the San Francisco playbook. But he’s still a running back – albeit a great one – so don’t put too much emphasis on his fantasy value. If someone blows you away with an offer (either multiple rookie picks or young players to replace him with), I would take it. He’ll be 27 during the 2023 season and time is running out for you to cash in on his value.

We have parted ways with head coach Frank Reich. pic.twitter.com/Fam6rNYfKM

The Colts franchise is in a state of flux, to say the least. Weeks after dumping veteran Matt Ryan for second-year quarterback Sam Ehlinger after Ryan proved to be a disaster, the Colts moved on from their coach as well, firing Frank Reich in favor of former Colt Jeff Saturday. It’s much too early to determine if Saturday will stick around but it’s clear the Colts are going to be in a rebuild after the season ends. We covered the fates of running back Jonathan Taylor and Michael Pittman in this space a few weeks ago but what does all of this mean for Ehlinger who was benched right away?

Dynasty Impact: Ehlinger has been given something not every drafted quarterback is – a chance to show what they got. He failed to attempt a pass his rookie season and had just three carries so, for all intents and purposes, the 2022 season is his rookie season. In his two starts, he threw for 304 yards total, no touchdowns, and one interception while losing a fumble. He did add some yardage on the ground but not enough to make up for no touchdowns. This makes some of the trades involving Ehlinger in the run-up to fantasy trade deadlines truly head-scratching.

Don’t be that person. Sam Ehlinger is not going to help your fantasy team and isn’t worth holding on to.

RELATED VIDEO
Enjoyed this video? If so, please be sure to LIKE this video and SUBSCRIBE to our channel for more awesome, FREE analysis all year long!
Michael Moore
Contributor at Dynasty League Football
Michael has played fantasy football for over 20 years when his mom funded his first team in the fourth grade. He’s contributed to various fantasy football publications and most recently spent five years writing for the Fantasy side of things at Pro Football Focus.
Latest posts by Michael Moore (see all)
Dynasty Twitter Observations: Rachaad White Steps Up, Christian McCaffrey Steps Back