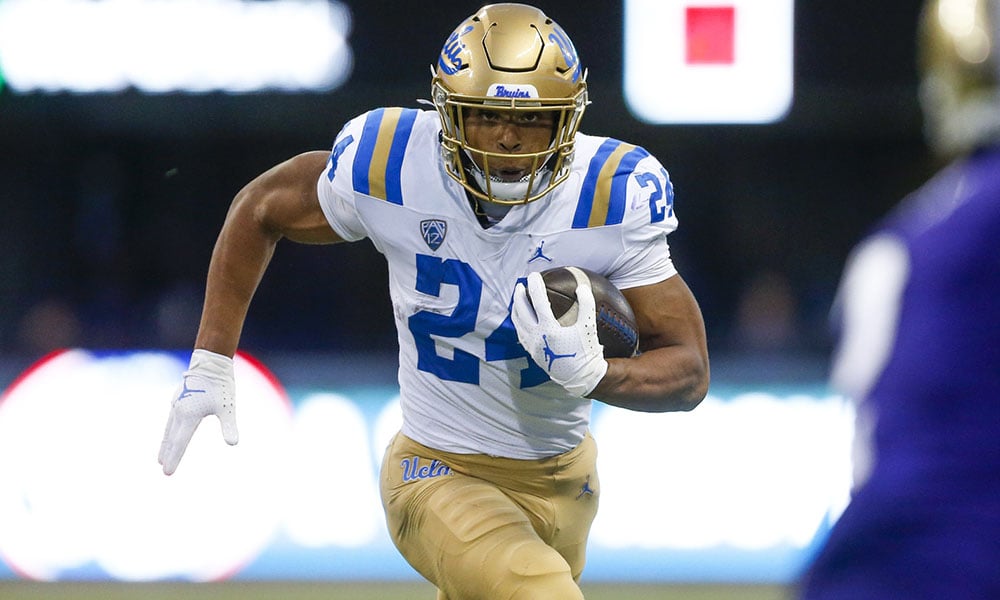 We break down some of the top college performers over the weekend.

Week 11’s slate of games was very entertaining UCLA and North Carolina State both got upset by unranked teams. Things didn’t shake up much at the top of the rankings as Oregon was the only team in the top ten to lose. Alabama snuck past Ole Miss 30-24 to remain in the top ten of the rankings. Fourth-ranked TCU avoided the upset against Texas with a 17-10 win.

Next week’s matchups won’t be as compelling compared to previous weeks but will still be entertaining as many teams in the top 25 are playing against softer opponents before finishing the college season.

Let’s take a look at some of the top matchups for week 12.

In a tight game against Wake Forest, Maye completed 31 of his 49 pass attempts for 448 yards and three touchdowns while also rushing for 71 yards and one touchdown. After a strong start to the season, he has recently been receiving national hype as one of the top quarterbacks in the country.

Williams lit up the scoreboard against Colorado, passing for 268 yards and three touchdowns while also rushing for another two touchdowns. He has passed for 3,010 yards and 31 touchdowns this season. Williams will be one of the top quarterbacks in the 2024 NFL Draft Class.

Penix is college football’s leading passer with 3,640 yards. He is quietly having a huge season. On the road against Oregon, he passed for 408 yards and two touchdowns. He is on pace to pass for more yards this season than he did during his four-year span at Indiana.

Kendre Miller made one cut and hit the paydirt 😤 pic.twitter.com/dcWoQfrxj4

Miller posted his fifth-straight 100-yard rushing performance on Saturday against Texas. He has emerged as one of the top running backs in college football. Look for him to be a hot topic this draft season. This year’s running back class is very competitive, and Miller has a lot of fans in the draft community.

At one point, Gray was considered a trendy asset in devy. After transferring to Oklahoma in 2021 and posting just 412 rushing yards in 13 games, many devy gamers have pivoted away from Gray. Quietly, he has posted four-straight 100-yard games and has ten rushing touchdowns on the season. He had his best game of the season on Saturday against West Virginia when he surpassed the 200-yard mark and rushed for two touchdowns. Gray might be a late-round option in rookie drafts this season.

Nicholas Singleton, you are ridiculous. 💥

Singleton is having a tremendous freshman season. His ten rushing touchdowns are the most scored by a freshman running back at Penn State. He is also averaging 4.37 yards after contact per attempt along with 14 carries of 15 yards or more. Against Maryland, he rushed for 122 yards and two touchdowns. He is currently 277 yards from tying Saquon Barkley’s rushing total during his freshman year.

Corum is another talented running back in the 2023 NFL Draft class. His 1,349 rushing yards and 17 touchdowns elevated his draft stock. He’s also a very powerful runner who maximizes his opportunities. We saw him post another big performance against Nebraska, rushing for 162 yards and one touchdown.

DTR helped set it up with a STELLAR block 😤 pic.twitter.com/duXjRKRIg5

Charbonnet has entered the chat and is letting us know he is one of the top running backs in the 2023 NFL Draft. He has rushed for 380 yards and six touchdowns in his last two games. He’s also showing more as a pass catcher this season with 29 catches for 269 yards. On Saturday, we saw him do work against Arizona, rushing for 185 yards and three touchdowns while also catching nine balls for 38 yards.

Many are calling Judkins the best freshman running back in college football. There are also claims that he’s the best running back in the SEC. Feel free to leave your opinion in the comments below. The one thing you can’t debate is his production. With four-straight 100-yard rushing performances against SEC competition is nothing to shake a stick at. He is going to make Zach Evans a discount in rookie drafts this spring. In a tough matchup against Alabama, he trucked for 135 yards and two touchdowns.

Bigsby is another talented running back in the 2023 NFL Draft class. He is going to quietly surpass the 1,000-yard mark this season, making it the second time in his career. We saw him post his third 100-yard performance against Texas A&M last week when he rushed for 121 yards while exploding with three runs of over 15 yards.

This reception helped set up the go-ahead FG for the Heels. It's 36-34 with 2:12 remaining. @UNCFootball | #ACCFootball

Downs is going to make an impact at the NFL level. Dynasty gamers will get to draft him in the 2023 NFL Draft. In his week 11 contest against Wake Forest, he caught 11 of his 12 targets for 154 yards and three touchdowns. He has surpassed the 100-yard mark in his last four games.

Flowers is an under-the-radar prospect for the 2023 NFL Draft class. He is having his most productive season this year with 922 receiving yards and ten touchdowns. Against North Carolina State, he caught eight passes for 128 yards and two touchdowns.

What a grab this was by the @OhioStateFB WR 🔥 pic.twitter.com/YgNlL9akEM

Harrison Jr. is already one of the best wide receivers in the nation. He is on pace to hit generational prospect status by the end of the season. There haven’t been many games this season where he didn’t post one of the best highlights in college football. In a blowout victory against Indiana, he caught seven balls for 135 yards and one touchdown. He’s either blowing up the scoreboard or blowing up Twitter with a tremendous highlight.

Hyatt is hitting the gas this season and is one of the biggest risers for the 2023 NFL Draft at the wide receiver position. He has the ability to dominate on any given week. Against Missouri, he caught seven passes for 146 yards and one touchdown. The junior wide receiver is averaging 3.51 yards per route and 8.3 yards after the catch per reception.

Nesbit is one of the most underrated tight ends in college football. He was targeted six times in week 11 while playing against Wake Forest, catching five balls for 63 yards. So far, he has caught 23 passes for 342 yards and three touchdowns on the season.

RELATED VIDEO
Enjoyed this video? If so, please be sure to LIKE this video and SUBSCRIBE to our channel for more awesome, FREE analysis all year long!
Bruce Matson
Contributor at Dynasty League Football
I'm a financial counselor for a hospital in South Central Ohio. I graduated from Muskingum University with a bachelor's in business while minoring in Economics and Accounting. I won my first fantasy football title with Jake Plummer as my quarterback.
Latest posts by Bruce Matson (see all)
Devy Fantasy Football Wrap-Up: Week 11