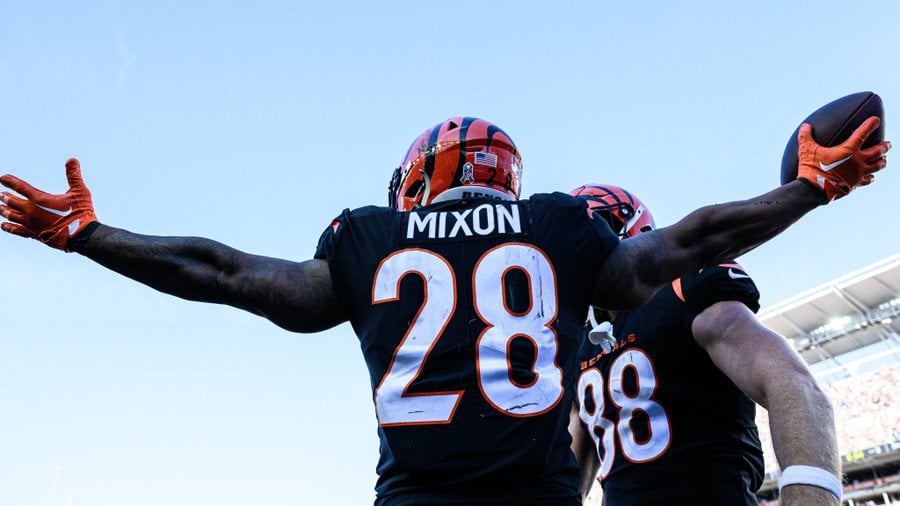 Chicago Bears second-year quarterback Justin Fields has been one of the more interesting stories of the past few weeks. In Week Nine, he was the story as he broke the single-game rushing record for a quarterback, carrying the ball for 178 yards and a touchdown to go along with three passing scores. With his steady improvement over the past month, Fields has vaulted himself up dynasty ranks and can be considered a surefire top-ten dynasty quarterback, at a minimum, moving forward. It will be no surprise that Fields was the big mover among the season-long quarterback ranks. He entered the top-12 last week as the QB11 and now climbs up to QB7. Patrick Mahomes also had another very solid game and moved back up to the QB2 spot. Lost in the Fields hype is the continued impressive play from Dolphins quarterback Tua Tagovailoa, who joins the QB1 ranks despite missing multiple games with injuries this season. He’s the QB11 through nine weeks.

The Raiders have now allowed a league-high seven QB1 games through nine weeks. They are also one of just two teams (Miami being the other) who have surrendered over 25 fantasy points per game to opposing signal callers. This week, the Raiders may be able to turn things around as they face the reeling Colts, who will presumably stick with Sam Ehlinger despite the coaching staff changes of the past few days. Regardless, the juiciest of matchups is not enough to convince me to take a chance on the Colts.

Other quarterbacks with nice matchups include Matthew Stafford (vs. ARI), PJ Walker (vs. ATL), Trevor Lawrence (vs. KC) and Jacoby Brissett (vs. MIA.)

The Broncos and Eagles are the two remaining teams who have yet to allow a QB1 performance. Many would argue that both teams are being propped up by an easy schedule but based on quarterback matchup alone, that should continue in Week Ten. Denver faces the Titans, who are expected to have Ryan Tannehill back under center, while the Eagles face off with division-rival Washington and Taylor Heinicke on Monday Night Football. All season long, Joe Mixon was getting the opportunity, he just couldn’t quite break through with a monster performance. That certainly changed in Week Nine as the Bengals relied more on their star back and Mixon delivered with four rushing scores and a beautiful touchdown catch, scoring over 50 fantasy points for the game.

Other highlights of the week included the return of Cordarrelle Patterson for the Falcons. Patterson has missed the past month with an injury but wasted little time in reestablishing himself as the top fantasy option in Atlanta. Jeff Wilson made his Dolphins debut and split the snaps and touches with former 49ers teammate Raheem Mostert. I expect this committee attack to continue but Wilson looked like the better player in Week Nine. Obviously, a 50+ fantasy point performance can really boost a player’s season-long standing. Mixon entered last week as the RB11 on the season. Now, he’s up to the RB2 on the year. Derrick Henry was another riser, moving to the RB3 on the year. Dameon Pierce carried the load for Houston on Thursday night and he rejoined the RB1 group, replacing injured rookie Breece Hall.

The Bears, Texans and Chargers have each allowed six RB1 games through nine weeks, making them the trio of teams to target when considering backfield options on a weekly basis. This week, the Bears face the Lions, making both Jamaal Williams and D’Andre Swift fantasy starters. Houston has actually been the worst team at stopping opposing backs, allowing over 33 fantasy points per contest. This week, that will give Saquon Barkley a chance to enjoy his best game of the season. Finally, the Chargers have the tough task of slowing down 49ers back Christian McCaffrey in their first game without veteran Jeff Wilson. Good luck!

A quartet of teams have allowed just one lone RB1 game this season, making these matchups to avoid, if possible. The Cowboys face a banged-up Packers squad. It looks like Aaron Jones, who suffered an ankle injury last week, will play, but we should expect to see more of AJ Dillon as well. The Buccaneers face the Seahawks and the red-hot rookie Kenneth Walker. Tampa Bay is one of five teams allowing less than 19 fantasy points to opposing backs, while Walker has exceeded that number on his own in three of his last four games. Something’s got to give and I’ll be banking on Walker. The Patriots are on bye this week. It was a tale of two halves for Raiders star Davante Adams. After a frustrating Week Eight game in which he was held to just one reception, the Raiders were intent on feeding Adams against the the Jaguars. It paid off. In the first half, Adams caught nine passes for 146 yards and two scores. He had over 30 fantasy points by halftime and the Raiders were up by double-digits. It all fell apart in the second half. While Adams still got the looks, drawing eight targets, he caught only one for no yardage. The Jags came back and won the game by a touchdown. Once again, there was a great deal of movement in and out of the top-12 wide receiver group this past week. Surprisingly, Ja’Marr Chase is still the WR8 on the season despite two missed games. Adams was the big mover of the week, climbing from WR9 to WR6.

The Falcons and Lions have each allowed seven WR1 games through nine weeks, making them to teams to target on a weekly basis. In Week Ten, Atlanta faces Carolina, which is great news for DJ Moore and Terrace Marshall. The Lions square off against division-rival Chicago and Darnell Mooney. The Titans are another team to target in this spot and they match up with Courtland Sutton, Jerry Jeudy and the Broncos coming off a bye.

The Patriots have yet to allow a WR1 game and won’t in Week Ten as they are on bye. There are five teams who have given up just one top-12 wideout performance on the year, which could make for a difficult week for some of the typical top options at the position. While the Titans, facing the Broncos, don’t really have any receivers we’d want to lock into lineups, this week’s matchups are not great for Davante Adams (vs. IND), Michael Pittman (vs. LV) and Brandin Cooks (vs. NYG.) Cole Kmet caught two touchdowns through the first 40 games of his career. Over the past two weeks, he’s scored three times including two in Week Nine, making him the TE2 for the week. TJ Hockenson made his Vikings debut and was an immediate difference-maker. We knew this would be a boost for the Minnesota offense but it could also positively impact Hockenson’s production and dynasty value.

Rookies Cade Otton and Isaiah Likely continued to play well filling in for injured veterans as both notch another TE1 game. Otton might just be claiming that starting job for good moving forward. Dallas Goedert was the TE1 for the week and that performance pushed him back inside the top-four tight ends for the season, right behind his former teammate Zach Ertz. Gerald Everett and Robert Tonyan joined the top-12 group, replacing Evan Engram and George Kittle.

The Seahawks are the obvious team to focus on when looking for tight ends in your weekly lineups, as they have allowed a league-high seven TE1 games on the year. This week, that means sticking with the rookie Otton, who has come up big for the Bucs in recent weeks. Arizona (vs. Tyler Higbee) and Atlanta (vs. Tommy Tremble) are the other matchups to target, with the Ravens on a bye.

Five teams have allowed only one TE1 game on the season, giving some normal fantasy starters difficult matchups in Week Ten. Hockenson (vs. BUF), Mike Gesicki (vs. CLE), Tonyan (vs. DAL), Pat Freiermuth (vs. NO) and Goedert (vs. WAS) all face challenging matchups.