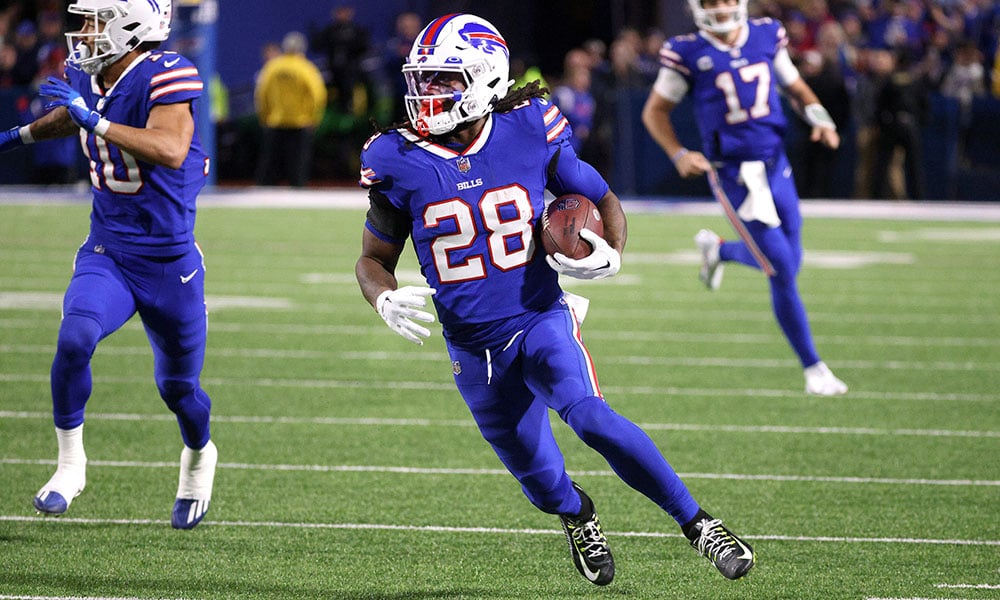 Dynasty Decisions: What Should You Do With Greg Dulcich and James Cook?

What next for Greg Dulcich? And have the Bills already given up on James Cook?

What a season it has been so far! There have been numerous breakouts, letdowns, injuries, and more. After every few weeks, it is extremely important to check on who has been breaking out or letting owners down. We as the fantasy football community have to analyze it and come up with an action plan moving forward for these players. I discussed Gerald Everett and Darnell Mooney last month, and in this article I will be discussing rookies Greg Dulcich and James Cook.

Dulcich began the season playing zero snaps in the first five games after spending time on injured reserve with a hamstring injury. He has since emerged as the clear number one tight end on the Denver Broncos. He has dominated the snap share, the targets, and the overall fantasy points for the Broncos’ tight end room over the past three contests. He has caught 12 of 17 targets for 187 yards and just a single touchdown in that time frame.

He is averaging just over 12 fantasy points per game, which puts him inside the top five in weeks six through eight. If he keeps up these numbers he will be looking at a top ten tight end finish, even with the first five games of irrelevancy. He has been able to put this all together on a Broncos’ offense that has arguably been the most disappointing offense in the league this season. For a tight end in today’s age, that is extremely impressive. NFL tight ends normally take two to three years for that type of breakout to emerge.

Dulcich did not just put up numbers, but he additionally passed the eye test. I have watched every target he has received. He gets open with solid route running, and makes good catches when he needs to. While he does not have Mark Andrews or Travis Kelce levels of athleticism, he can absolutely do damage with the ball in his hands. I expect borderline top-six production to continue through the rest of the season like it has been the past couple of weeks.

Denver recently added Chase Edmonds and traded away Bradley Chubb before the trade deadline. Additionally, they are headed into their week nine bye with a lot to figure out. The offense is currently averaging under 17 points per game and they are 2-6 on the year, after many people, myself included, in the off-season looked at them as strong playoff contenders.

Considering how well Dulcich has performed with the volume he has received, we should expect the Broncos to make him a key part of the offense, especially around the red zone due to his 6’4”, 245-pound frame. If Denver can figure out their offense with the bye week off and get to the red zone more often, that will greatly benefit his touchdown opportunity.

In dynasty fantasy football, Dulcich is a player I want to buy into even though he has played so well. He is looking at a lot of opportunities this year, and potentially in the future too. Before the trade deadline, there were apparently trade talks surrounding Jerry Jeudy. The Broncos have already extended Courtland Sutton and Tim Patrick to multi-year contracts, and likely will not have the cap space to give Jeudy the money he may want. That may lead to an off-season trade for Jeudy which would open up plenty more opportunities for Dulcich to step into the top of fantasy football tight ends. He is already there now, but if more opportunity arises either this year or in the future, expect him to take full advantage.

Moving on to the less positive part of this article, Cook needs to be talked about. Through the off-season, it was clear that the Bills wanted a pass-catching running back. They were apparently very involved in the race for free agent Chase Edmonds, who ended up with Miami in free agency. The Bills also agreed on a deal with JD McKissic, but the Washington Commanders matched Buffalo’s offer and he decided to stay in red and gold. After two failed attempts at getting a pass-catching running back, Buffalo looked to the draft.

When his name got called in round two of the 2022 NFL Draft and as we moved through the off-season, there was a great deal of hope and excitement for him in this electric Bills offense. Those hopes have not come to fruition so far. On the first touch for him in the regular season, he took it for two yards before fumbling the football, and causing a turnover. He did not touch the ball for the remainder of the game. Since that game, Cook has only put up 208 total yards and has gotten in the end zone one single time since then. He has frankly been useless for fantasy purposes this year thus far.

It may seem bad now, but the hope for him is getting even weaker. After seeing an entire off-season and a full eight weeks, Buffalo has decided Cook is not enough to be their main pass-catching running back. The Bills traded for veteran running back Nyheim Hines, who we have seen make a sizeable impact in Indianapolis. In four full years in blue and white, he has racked up 300 carries and 235 receptions, which is an average of 75 carries and 59 receptions per season. That in fact adds up to about 8.5 touches per game. It is nothing special, but what if Hines slots into that type of role in Buffalo?

Devin Singletary already receives a decent workload of 13 touches a game, and Josh Allen runs the football nearly eight times a game already. If you add on Hines’ workload and consider how little the Bills run the ball and that they are in the bottom five in target share to the running back position since 2019, there will be no room for Cook to make an impact. The numbers just do not add up in his favor.

In dynasty fantasy football, there are few managers who want to buy into Cook. People are nervous about his performance so far this year along with Hines recently being added to the depth chart. Therefore, if you have him you may just have to hold on and hope he can figure it out and beat out Hines. He knows he is on the hot seat, if he can find that extra burst he may be able to beat out Hines. However, I highly doubt it. It has been eight straight frustrating weeks for Cook and it has not changed. The Bills brought in Hines for a specific reason, and it seems like they do not believe in their second-round pick from this past draft.

Hutchinson Brown
Contributor at Dynasty League Football
Hutchinson Brown is a teenager living in Bethlehem, PA who is an aspiring fantasy football analyst. He writes for DLF and he hosts The Young Fantasy Mind Football Podcast, which can be found most places you listen to podcasts. He also has a Twitter account where he uses humor, sarcasm, and statistics to get out his fantasy football takes. Go follow him on Twitter and check out his podcast!
Latest posts by Hutchinson Brown (see all)
Dynasty Decisions: What Should You Do With Greg Dulcich and James Cook?