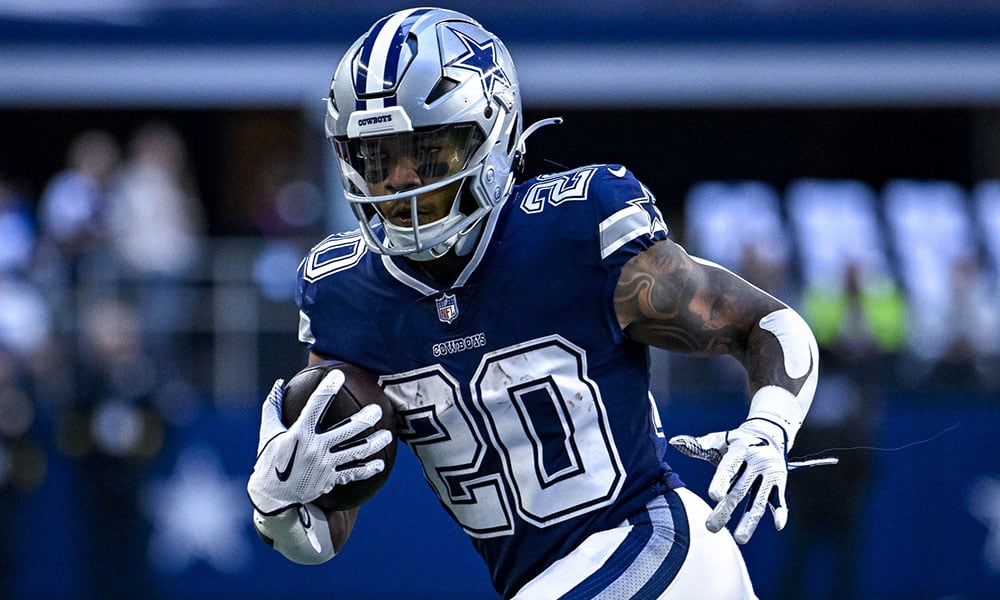 Dynasty Twitter Observations: Tony Pollard Up, Trevor Lawrence Down, and Kadarius Toney Out

We discuss a wide receiver on the move, a hyped quarterback, and a booming running back.

While there have been some trades happening (see below), a lot of this week’s Twitter content concerns developments on the field. From a former stud on the declining to a backup looking like anything but, below are a few of the tweets that stood out this week.

Kadarius Toney‘s image of a fantasy-relevant player is outsized compared to his actual production. It started in college at Florida when he was an average utility player who never saw more than 46 touches in a season until his senior season breakout. That last year, he still saw only 99 touches but managed to score 11 times. He parlayed that production into a first-round selection by the Giants in 2021. It was more of the same for Toney in the pros as he was non-existent for most of his rookie season save for one huge outburst where he caught 13 balls for 189 yards and a touchdown. We’re now in 2022 and Toney has two receptions for, literally, zero yards.

The fact the Giants got a third-round pick for Toney is impressive seeing as he’s done nothing to show he’s worth that just one year after being picked in the first. But if anyone can crack that code, it would be his new coach Andy Reid and quarterback Patrick Mahomes.

Dynasty Impact: Toney has always been a boom-or-bust pick whether it was in real life or fantasy leagues. The Giants drafted him to stretch the field and make splash plays, not necessarily to see 100 targets a year. Even as a first-round pick, his dynasty value wasn’t what other first-round receivers would be early in their career.

So if you’re going to utilize a player so little, you better be efficient about it. The Giants weren’t and when they cleaned house in the off-season, Toney’s ticket was punched.

But the trade could be a rare win-win. The Giants recoup some draft pick capital and free-up touches for another splash player in Wan’Dale Robinson. The Chiefs get another playmaker to move around the field. And Toney gets the best opportunity he’ll get to show what he can do. He won’t be the focus of defenses (at least initially) and won’t have to worry about his quarterback getting him the ball. Mahomes can do what he wants on offense and if Toney shows he can contribute, his QB will find him.

For your dynasty team, there will be a slight bump in Toney’s value. He’d be worth a flier in the late second or early third-round rookie pick range, according to the DLF Trade Analyzer.

We Need to Talk About Trevor

Few quarterbacks have been ticketed as the top pick in the draft as early and solidly as Trevor Lawrence was and fulfilled that prophecy after Jacksonville took him first overall in 2021. The Clemson quarterback won a national championship his freshman year and followed that up with an All-American season before leaving school early for the NFL. The hype carried over to dynasty leagues as well where Lawrence was taken at, or near, the top of superflex rookie drafts and even some 1QB rookie drafts. Since then, however, Lawrence’s dynasty value has seemingly been in decline. His rookie season was an unmitigated disaster thanks to the Urban Meyer experiment. On the season, Lawrence threw for over 3,600 yards but just 12 touchdowns and 17 interceptions and was nowhere near the fantasy stud he was expected to be.

Luckily, Jacksonville moved on fairly quickly and brought in Doug Pederson to develop Lawrence in his sophomore season and beyond. Unfortunately for Lawrence, the Jaguars, and Lawrence’s fantasy managers, 2022 has been more of the same including the pick in London shown in the Tweet above. On the season, he’s at just 1,840 yards, 10 touchdowns, and six interceptions halfway through the season. Technically, he’s on the QB1/2 line when it comes to fantasy scoring but Lawrence was expected to be a lot further along by now.

Dynasty Impact: While Lawrence dynasty managers understandably didn’t read too much into last season, it’s getting harder to ignore his performance this season. Fortunately, his dynasty value hasn’t taken much of a hit yet.

But that day may be coming soon enough. Lawrence’s value managed to stand pat this season partially due to the dearth of rookie quarterbacks entering the league in 2022. The pool was essentially the same as it was last year. That won’t be the case in 2023 when you have at least two signal callers (Ohio State’s CJ Stroud, and Alabama’s Bryce Young) expected to be taken near the top of both real and fantasy drafts. If a good deal presents itself for Lawrence, pull the trigger. Better to be too early than too late when it comes to moving off a depreciated asset.

*Tony Pollard gets three more starts and averages 300 yards per game. Pollard later reveals that he has also figured out a cure for COVID as well as cancer. He even rescues a local cat who got stuck in a tall tree before practice.*

Jerry Jones: Zeke is and always will be our RB1

The tweet above encapsulates what, seemingly, the non-Jerry Jones portion of the population is thinking after this week. ‘Backup’ Cowboys running back Tony Pollard carved up the Bears in a spot start for the injured Ezekiel Elliott, running for 131 yards on just 14 carries and three touchdowns. But this game wasn’t the only example of Pollard simply outplaying Elliott – he’s been doing it all season. Pollard has 14% more rushing yards on 25% fewer carries than Elliott does and has one more rushing touchdown. And that doesn’t even count the passing game where Pollard’s 121 yards is nearly four times as much as Elliott’s 32. It’s as plain as day for everyone except the only person that matters, Cowboys owner Jerry Jones. It makes for a very complicated dynasty situation for both Elliott and Pollard.

Dynasty Impact: For more nuanced fantasy players, the supplanting of Elliott by Pollard has been in the works for a while. Just see their dynasty ADP over the past few months.

And while Jerry Jones has always been resistant to the idea of Elliott riding the bench, he may not have a choice after this week. Pollard’s full skill set was on display as he averaged 9.4 yards-per-carry which upped his season-long average to over six. He also added a reception of which Elliott only has six on the season.

Pollard is simply the better player and should be starting somewhere next season after his rookie deal expires. It’s doubtful he’ll be back in Dallas where the Cowboys are hamstrung by Elliott’s contract for at least another season. For dynasty purposes, value Pollard as an RB1 whether you’re a team trading him away for picks next year or if you’re looking to make a playoff run this year.

Michael Moore
Contributor at Dynasty League Football
Michael has played fantasy football for over 20 years when his mom funded his first team in the fourth grade. He’s contributed to various fantasy football publications and most recently spent five years writing for the Fantasy side of things at Pro Football Focus.
Latest posts by Michael Moore (see all)
Dynasty Twitter Observations: Tony Pollard Up, Trevor Lawrence Down, and Kadarius Toney Out

For me, TLaw’s second half of the season is what I’ve been waiting for in terms of a breakout. Not only does he have to unlearn whatever Meyer did to him, but now they’re implementing his second new system in as many years, and it doesn’t seem like Pedersen is dumbing down the playbook for him. Growing pains this year we’re inevitable. Worse comes to worst, this year is his “actual” rookie year. If he were having this season last year, I’d be optimistic still. So I’m treating last year as a completely lost year, and still have high expectations for the young man.