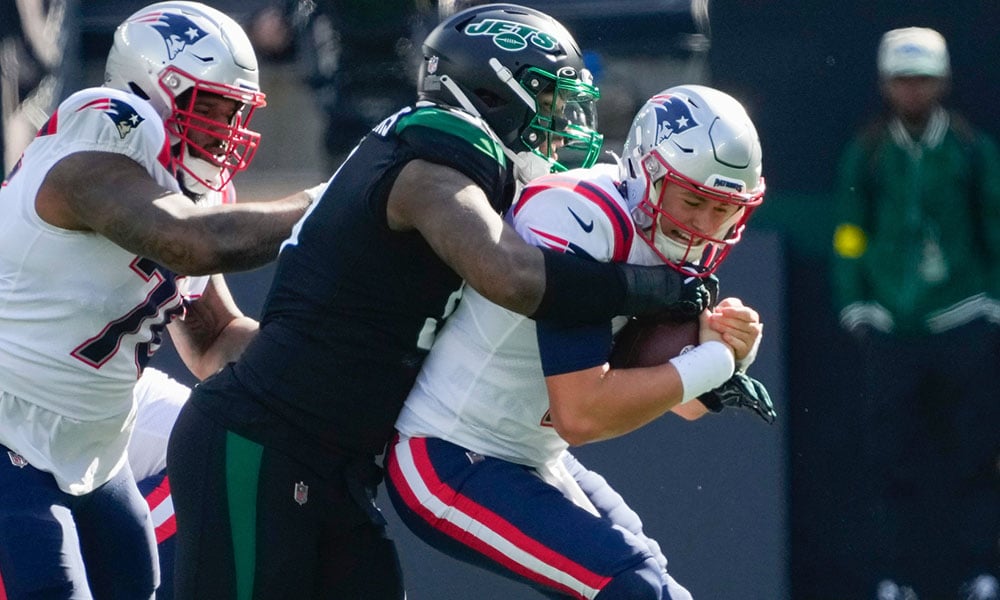 We pick out some possible IDP Waiver Wire targets.

It’s more frightening than Daniel Snyder as the owner of your favorite team! It’s likely more terrifying than watching Cooper Kupp being tended to on the field during the closing minute of a blowout loss. Yes, it’s the IDP dynasty waiver wire, on Halloween. If you scare easily, avert your eyes. Treats are few and far between this week.

Jermaine Johnson has been relatively quiet as a rookie and has now missed three consecutive outings with an ankle injury. Franklin-Myers, whose value took the biggest hit after the Jets drafted Johnson, has been productive since week four, and added a sack among three total tackles against the Patriots. The dynasty ceiling is the standard eight-foot, popcorn-paint variety, but Franklin-Myers is worth spot-start consideration.

I don’t want to get carried away with a big stat line (two fourth-quarter sacks among four total tackles) in a rout, but we seriously needed something to hang our hats on when it comes to Turner. The 2021 first-round pick has only seen snaps in four games, and his 32 snaps against Las Vegas was a season-high. I have him sitting at the tail end of my top 150, and so far this season that’s only due to his draft capital and situation (Marcus Davenport’s contract voids after this season, and Cameron Jordan is 33). Pick him up where he’s been abandoned and hope this is the start of something good.

The veteran lineman enjoyed his best game of the season at Detroit with a sack, three solo tackles, an assist and two passes defensed. He hasn’t been starter worthy this year, but his snap counts have ticked upward for the past couple of weeks, and he’s just 27. The Dolphins travel to Chicago this week, and the Bears are one of the better matchups for opposing defensive linemen.

I listed Williams last week as a dynasty stash with Javon Hargrave and Fletcher Cox coming up on free agency. With rookie Jordan Davis suffering a potential high ankle sprain on Sunday, Williams’ short-term outlook improved as well. He finished with a sack and a pass defended on 30 snaps against the Steelers.

We were told not to expect to see Clark this season following spinal fusion surgery in March – a procedure that tanked his draft stock. But the fifth-round pick was surprisingly activated for week eight, and opportunity came knocking early when Anthony Barr left the game with a hamstring injury in the second quarter. Clark responded with a solo tackle and five assists, and nearly collected a sack.

Should Clark be available in any of your dynasty leagues, prioritize him on waivers this week. The LSU star was a projected day two pick prior to discovery of a herniated disc. Current Dallas starters Leighton Vander Esch and Barr are playing on one-year deals.

De’Vondre Campbell suffered a knee injury during the second half of Sunday Night Football and didn’t return. Should the injury be something severe, McDuffie (three solos, two assists) and Wilson (a sack, three solos and an assist) will become waiver wire priorities. Neither has much dynasty appeal with both Campbell and rookie Quay Walker entrenched as starters, so only go after them if there’s short-term appeal. At the time of this writing (Sunday night), it’s not clear how bad Campbell’s injury is.

Smith seems to have finally taken over primary linebacker duties for Big Blue, and he topped Giants linebackers in tackles with two solos and five assists against Seattle. There’s not a full-time role to be had, it seems, but at least we can envision a world where Tae Crowder only sees the field in limited quantities. The rookie McFadden offers the most dynasty appeal, although I think he’s a somewhat limited player. His sack and four total tackles looked nice this week. The Giants are on a bye in week nine – will we see a move to bring in a more well-rounded linebacker before Tuesday’s 4 p.m. trade deadline?

The Texans gave Christian Harris a full snap load on Sunday, with Christian Kirksey dropping back to the No. 2 role. There’s still two fantasy-relevant linebacker spots here, and with Kamu Grugier-Hill being granted his requested release, Wallow is up to third on the linebacker depth chart. He’s not playing enough to currently be considered lineup-worthy, but should injury strike one of the starters, you may have an LB4 on your hands. There may even be some dynasty value here with Kirksey a prime candidate for off-season release, a move that would save Houston $5 million against the cap, with just $1 million in dead money, according to OverTheCap.com. The 2021 fifth-round pick put up a meager one solo and two assists, but this is where we find ourselves when digging deep on dynasty waiver wires.

I don’t particularly want to mess with Murray, but he put up a respectable six combined tackles (five solos, one assist) in relief of early season darling Jonathan Owens. I’m not sure if Owens (just two total tackles) was injured or simply benched in favor of Murray, but the veteran looks like a short-term safety option in a fantasy-friendly matchup with Philadelphia in week nine.

I’m assuming Antoine Winfield Jr. returns from his concussion in week nine, but Neal should still be OK to consider as the primary box safety, with Mike Edwards playing deep and Winfield lining up over the slot. Neal had a decent week eight with four solos and four assists against the Ravens, and until Logan Ryan returns, Neal should be a serviceable, low-ceiling safety play. Hopefully you have better options.

Carter and Reed are great options (as is Sauce Gardner, if not rostered) against Buffalo in week nine. Both are also coming off nice weeks – Reed collected five solo tackles, three assists and a pass defensed, and Carter put up seven solos (one in the backfield) to go along with an interception.

Dean has been a solid play this season and, even though he was only targeted twice by Baltimore, had a solid outing with six total tackles (two on special teams) – bringing his season totals to 30 solos and six assists. The Rams are one of the better fantasy matchups for corners, making Dean a waiver wire target anywhere he’s available. Davis, who missed week eight with a hip injury, is certainly worth exploring. If healthy, he should see a good bit of target hog Cooper Kupp – assuming the Rams star is able to play.

Tampa Bay’s secondary has been banged up all year, so if Davis is ruled out, Dee Delaney becomes an option. I suppose we could see Sean Murphy-Bunting return from his quad injury, but I wouldn’t count on it this early in the week.

Jason King
Contributor at Dynasty League Football
Jason is a lifelong Steelers fan and proud alumnus of NC State University. He caught the fantasy football bug in 1996, and has a strange but strong affinity for IDP dynasty leagues with multiple copies of players. When he's not thinking about fantasy football, he's doing something with his two children, dabbling with photography or fixing something around the house.
Latest posts by Jason King (see all)
IDP Dynasty Fantasy Football Waiver Wire: Week Nine

In light of the Roquan Smith trade … Nicholas Morrow, if available in a shallow league, becomes an all-in waiver wire pickup.
Otherwise,
1. Jack Sanborn – undrafted rookie from Wisconsin
2. Sterling Weatherford – undrafted rookie from Miami of Ohio. Great preseason!
3. Joe Thomas – solid vet but what does Chicago have to gain by putting him in an every-down role?