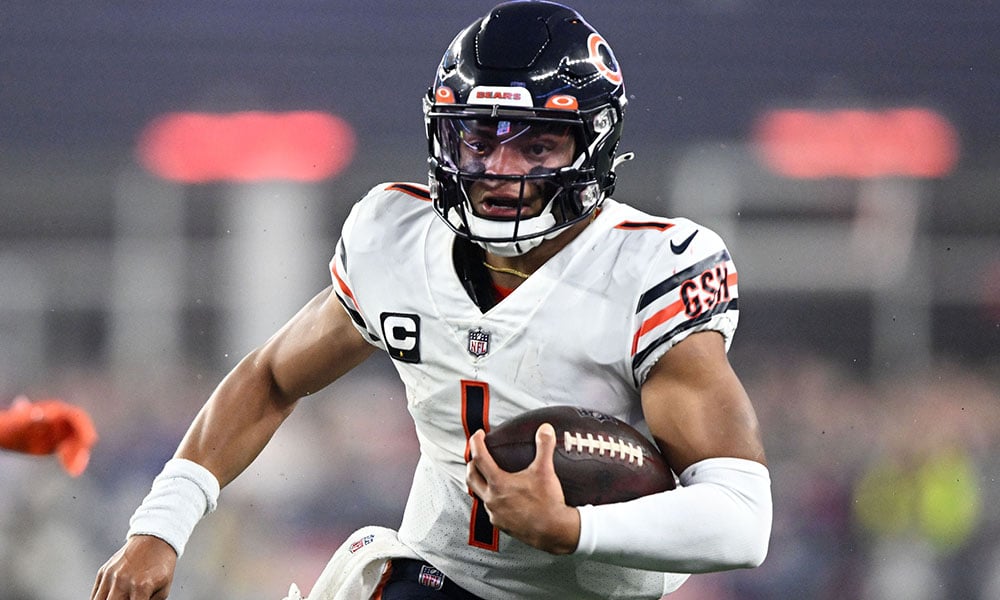 We catch up with some of devy and dynasty’s interesting young players.

Jaxon Smith-Njigba, WR Ohio State can’t get back on the field

Still viewed as one of the top WRs for the 2023 NFL Draft, Smith-Njigba has struggled with a hamstring injury all season. He was finally set to return against Iowa and resume his spot as the top weapon for the Buckeyes. After an opening drive catch and fumble, he was put on the bench with speculation surrounding if he re-aggravated his hamstring injury. Ultimately, he returned briefly, with head coach Ryan Day putting him on a pitch count. It’s very possible the draft stock and devy value of Smith-Njigba have fallen and may not be rehabbed until he gets on an NFL field.

Still a bit of an unknown in the devy community, Kraft was a highly touted TE with an NFL future coming into the season. Unfortunately, an ankle injury in the first game of the season put him on -the sidelines for almost two months. Returning this past week against North Dakota, the big-bodied agile TE looked sharp and scored a 32-yard TD. With George Kittle-type athleticism and blocking ability, Kraft has a shot to be a top-50 pick at the TE position and an instant cornerstone asset.

After ripping off a 62-yard TD run earlier in the game, tragedy struck when Hall tore his ACL on an outside run. Thankfully, it was only an ACL tear with slight meniscus damage, so not nearly as bad as recent injuries to JK Dobbins and Javonte Williams. The Jets have traded for James Robinson to try and replace the production. Hall was ascending to dynasty RB1 very quickly and his loss is a huge blow to fantasy owners. Ultimately, Hall should recover and be effective next season.

After Rashaad Penny’s injury, expectations were very high for the rookie Walker. He has smashed those expectations and then some, becoming a recognized name after a 168-yard and two-touchdown performance. Walker is even the leading candidate for Offensive Rookie Of The Year now. His value has risen rapidly with good performances and a Seahawks offense that is humming, valued as a top-five dynasty RB.

With a big loss to the Bears on Monday Night Football, the Patriots may have a controversy at QB on their hands. Before the game, rumors of a 2QB system emerged as Jones returned from injury. He started the night, but clearly was not 100% yet, leading to boos and chants from the Foxborough crowd and calls for Zappe. Jones was benched after an interception, and though he had a few TD drives, his play was plagued with turnovers. Any starting QB can be a superflex cornerstone piece, but until the situation is resolved, it becomes very murky for investing in the Patriots’ offense for the foreseeable future.

Travis Etienne, RB JAC gets the backfield to himself

With James Robinson being traded, Etienne’s stock has seen a massive improvement. Already, coach Doug Pedersen seemed to rely on the former first-round pick as the primary ball carrier for the Jaguars. Now, with no real threat behind him, Etienne and QB Trevor Lawrence become the young core to lead the offense for the future. Against the Giants, Etienne had 114 yards and a touchdown on the ground. With talks of him ascending to top-five dynasty RB status, his value is high right now as a fantasy RB1.

After a mini-bye week (11 days between games) the Bears’ offense was humming against the Patriots. With new concepts on offense, including utilizing Fields legs and roll-out abilities, the Bears offense exploded for 33 points. Fields himself ran for 82 yards and a touchdown while passing for 179 yards and another touchdown. Similar to the Eagles last season off the mini-bye, the Bears appear to have revamped the offense to fit their QB and utilize the skill set of the weapons they have. His stock, along with other Bears players, is trending upwards.

RELATED VIDEO
Enjoyed this video? If so, please be sure to LIKE this video and SUBSCRIBE to our channel for more awesome, FREE analysis all year long!
Shane Hallam
Contributor at Dynasty League Football
Shane has been analyzing and writing about the NFL Draft and fantasy football for over 15 years. He is currently a Managing Partner at DraftCountdown.com and co-host of the Devy Marketplace Podcast. He was the winner of the "Top 100" contest at Huddle Report in 2015 and 2020 in predicting the NFL Draft.
Latest posts by Shane Hallam (see all)
Dynasty Fantasy Football Rankings: Cornerstone Report, Week Nine