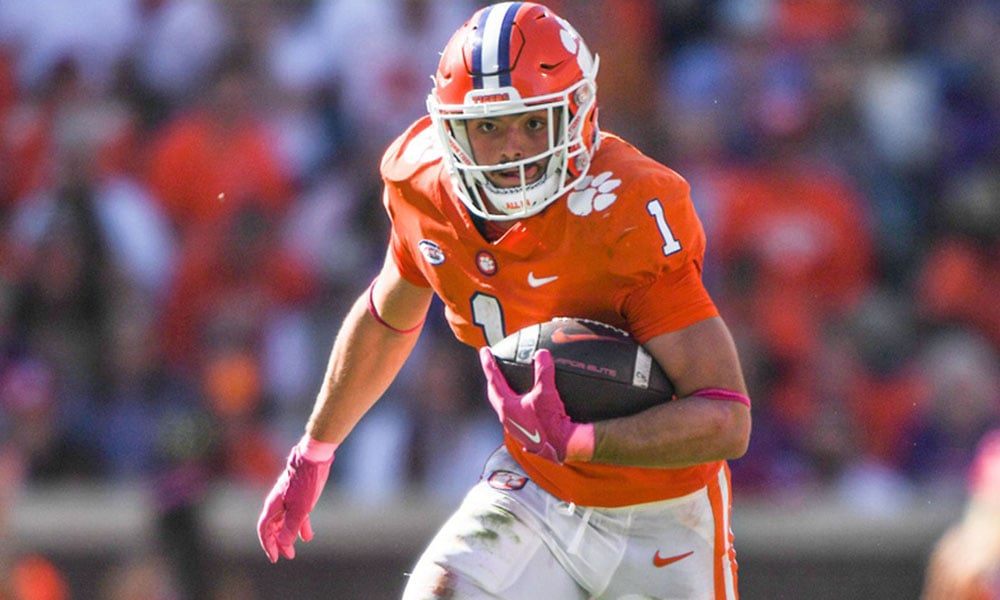 We check in on college football’s top performers. Who do you need to know about?

Since we had a few major programs on bye, week eight was a little quiet when it came to powerhouse matchups. We did get some interesting games that kept us entertained. Syracuse put Clemson on the ropes, but couldn’t finish them off and lost 27-21. TCU was able to mount a second-half comeback to defeat Kansas State by ten points. Oregon and UCLA lit up the scoreboard for 75 combined points.

Week nine is going to present some interesting matchups. The deeper we get into the schedule the higher the stakes get for the top programs. After combing through some of the matchups, here are some games to look forward to for next week.

Nix developed into a college football meme due to his poor play during his tenure at Auburn. He was once a decorated recruit. Now, he’s trying to rebuild himself at Oregon. We saw him gain some national recognition on Saturday when he completed 22 of his 28 passes for 283 yards and five touchdowns against a ninth-ranked UCLA team. He has led the Ducks to a 6-1 record. By no means is he considered a big-time devy prospect, but it’s good to see a player turn things around during their collegiate career.

Hooker is one of my favorite quarterbacks in college football. He’s now getting some publicity since his win over Alabama. He’s a very efficient quarterback who is always there to make the big play when his team needs it. Against UT Martin, he passes for 276 yards and three touchdowns. Although his statistics are not video-game-like, he has passed for 2,093 yards and 18 touchdowns on the season while leading Tennessee to a 7-0 record.

Daniels is another quarterback who is trying to rejuvenate his career after spending three seasons at Arizona State. He was an intriguing devy prospect a few years ago. However, the shine is now gone, and Daniels is looking to add value to his draft portfolio. In a scrap against Ole Miss, we saw him lead LSU to a 45-20 upset victory. In this game, he completed 21 of his 28 pass attempts for 248 yards and two touchdowns while rushing for 121 yards and three touchdowns.

The former five-star recruit had a huge performance against 14th-ranked Syracuse, rushing for 172 yards and two touchdowns. He also caught three passes for 17 yards. He is the RB10 in DLF’s devy rankings. There is some room for growth in his player value if he continues to be productive and plays well in 2023.

We all need to pitch in some money so we can get enough bubble wrap to keep Robinson safe until it’s time for the NFL Draft. Everybody already knows he is ready for the next level and he has nothing to prove. Against Oklahoma State, he carried the ball 24 times for 140 yards and one touchdown while also catching one pass for 41 yards and one touchdown. We are to the point that it’s not about his performance, but him getting through these games without any major injuries because he’s cemented in as the 1.01 in dynasty rookie drafts for 2023.

The three-star freshman running back had a big performance against Kansas rushing for 186 yards and two touchdowns while catching two balls for 26 yards. He has nine touchdowns on the season and is quietly having a productive freshman year. He’s not on the radar as a top-end devy prospect, but considering the production during his first year, he’s a player to keep an eye on.

Allen is going to be one of the top running backs in the 2024 NFL Draft. He consistently churns out yards and has the size-adjusted speed to be a threat. Allen had another day crossing the century mark when he rushed for 113 yards and one touchdown. We also saw him explode for a 41-yard run in this game. On the season he is averaging 3.27 yards after contact per attempt and has forced 37 missed tackles. We are also seeing a slight uptick in his receiving production with 10 catches for 100 yards.

We saw another young running back come out of nowhere for a big game on Saturday. The second-year running back prospect exploded for 174 yards and three touchdowns in a win against Northwestern. I wouldn’t consider a must-get devy prospect, but it’s always good to take a look at lesser-known running backs who blow up the box score.

Charbonnet’s collegiate career has been a roller coaster. He was a top-end recruit coming out of college. Had a weird stint at Michigan where he posted double-digit touchdowns as a freshman, but his sophomore season didn’t go his way. Then he transferred to UCLA and was productive in 2021. He surprised everyone by not going into the draft. The analytics says this is a bad move but considering he has done nothing but ball out, it might have been the best decision for him.

Against Oregon, he posed 151 rushing yards and one touchdown while catching four balls for 28 yards. He has been dominant this season with five 100-yard rushing performances in six games. He’s also on pace to see an increase in receiving production since he already has 15 catches for 171 yards.

Judkins is taking over. He is making the devy recap almost every week which is a good sign for a young running back prospect. In a tough loss against LSU, we saw him rush for 111 yards and two touchdowns. The freshman running back is currently averaging 3.13 yards after contact per attempt with 44 missed tackles. He has eclipsed the century mark five times this season and is on pace to surpass the 1,000-yard mark.

The five-star running back prospect has been quiet in his last couple of games but against Minnesota, he was able to churn together some production by rushing for 79 yards and two touchdowns. He also caught two balls for 28 yards. Singleton is averaging 4.43 yards after contact on the season and when he gets room to run, he’s a threat to score every single time.

Flowers has been productive throughout his career. He broke out during his second season at Boston college at the age of 20 with a 28.53 percent market share of the team’s passing production. With three 100-yard performances, he is on pace to surpass the 1,000-yard mark this season. Against Wake Forrest he went off, catching ten passes for 135 yards and one touchdown. He currently owns a 41.20 percent market share of Boston College’s passing production.

The former five-star prospect has not lived up to expectations during his career but has made some highlight plays. In his game against Northwestern, we saw him catch eight balls for 82 yards and one touchdown. This was one of his best performances of the season. Considering he’s a hyper-athletic wide receiver prospect with a prestigious high school recruiting grade, he needs to ramp up the production to cap off his junior season. If not, then it might be best to play his senior season. Maybe even transfer to a program where he can be utilized to his potential.

The sophomore wide receiver had his second big game of the season last weekend against UCLA. In this performance, he caught eight balls for 132 yards and two touchdowns. He has 561 yards and five touchdowns on the season and is on pace to pass the 1,000-yard mark. On top of that, he currently owns a 29.40 percent market share of his team’s passing production.

Steward was one of the top wide receivers in this year’s recruiting class. We’ve been monitoring him all season. Against South Carolina, he led the team in receiving catching eight passes for 87 yards. It wasn’t the most dominant performance on the slate but it’s good to see top-level freshman wide receivers produce in the box score.

Hyatt is one of the most productive wide receivers in college football right now. He has 769 yards and 12 touchdowns on the season. He has also caught 13 balls for 381 yards and seven touchdowns in his last two games. Hyatt has proven to be a very explosive weapon for Hendon Hooker.

Burden is another five-star wide receiver prospect who has had his moments this season. In a 17-14 victory against Vanderbilt, he caught four balls for 66 yards and one touchdown. He also had one carry for ten yards and one touchdown. We’ve seen him used in a similar fashion as Deebo Samuel is used in San Francisco. He’s a very talented prospect and he’s a guy all devy and dynasty gamers need to keep tabs on.

Mayer continues to produce and be the main receiving threat for Notre Dame. Against UNLV, he caught six passes for 115 yards and one touchdown. He owns a 36.15 percent market share of the team’s passing production. On the season he is currently averaging 4.7 yards after the catch per reception and 2.47 yards per route run.

Bruce Matson
Contributor at Dynasty League Football
I'm a financial counselor for a hospital in South Central Ohio. I graduated from Muskingum University with a bachelor's in business while minoring in Economics and Accounting. I won my first fantasy football title with Jake Plummer as my quarterback.
Latest posts by Bruce Matson (see all)
Devy Fantasy Football Wrap-Up: Week Eight