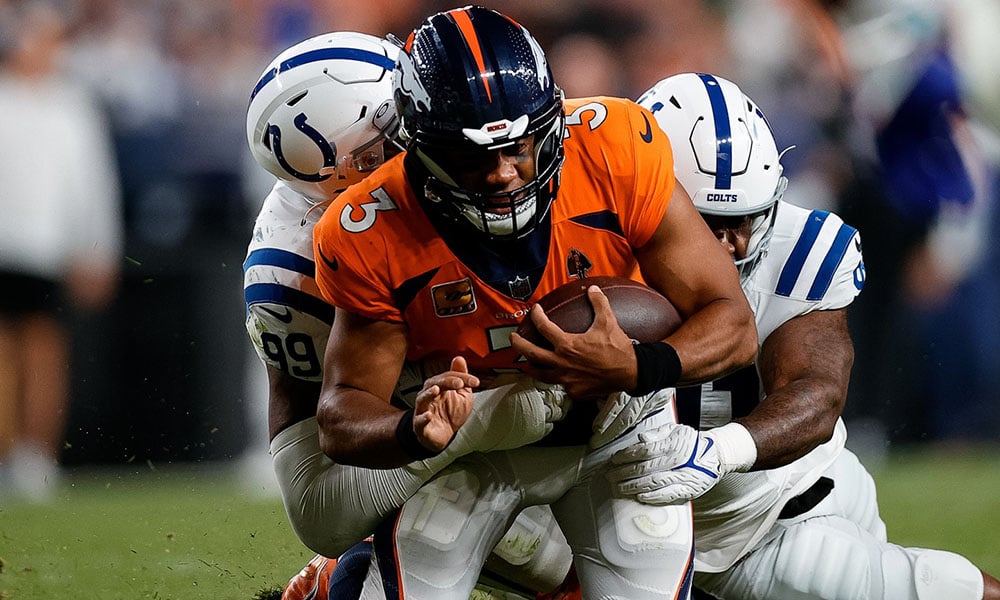 We look at players with moving values in our dynasty rankings.

We will avoid the no-brainer changes each week. Instead, we will focus on the more subtle shiftings in the rankings.

It appears that Wilson is fading. Fast. Jokes are going around the Twitterverse that Indianapolis is where quarterbacks go to die but perhaps it is Denver. When did it all go wrong for Russ? Maybe the writing was on the wall last season.

Wilson had his worst season in 2021 when he finished as the QB16. The veteran only played in 14 games but only managed to produce a QB1 finish in just six of those contests. Even more concerning was that he had more QB3 finishes than he did top fives (3:2). His ability to extend plays seems to have vanished with age.

Looking at the percentage fantasy points data charts above, we can see a significant decline in rushing yards from 2020 to 2021. When Wilson was racking up top-five fantasy seasons, he was accumulating about 15% of his points with his legs. In 2021, that number dropped down to nearly 10%. The percentages are back up this season, but that is only because he has been so bad passing the ball that his 73 yards and one rushing touchdown (13.3 points) account for 15% of his 89 total points.

We have no problems moving Tua Tagovailoa or Kirk Cousins ahead of the 33-year-old at this point. The abundance of primetime games early has not been kind to the former Seahawks signal-caller.

Injuries and age will make running back the most volatile of all the positions, and I won’t be dropping the obvious fallers due to injury. Instead, I will focus more on opportunities and performances.

The season started well for Cinderella story James Robinson (again). He sat as the RB3 in PPR formats for three weeks, 34 spots ahead of teammate Etienne. The past two weeks tell a different story, one of a particular player being a first-round pick and another being a UDFA. Neither running back played well in the elements in Philadelphia in week four, and the offense was downright offensive in week five versus the division-rival Texans. Etienne just looked like the better player in that one and earned more touches for the first time this season. He racked up 71 yards on ten carries and added another 43 yards on three receptions. Robinson plodded his way for 27 yards on the same number of rushes. It was the third time in five games that Etienne earned more snaps than his backfield-mate Robinson. Teams do not typically draft players in the first round to sit behind players who weren’t drafted, regardless of how well they have done in the past. Robinson was a great story in 2020, finishing as the RB7, and even managed an RB23 finish last year despite playing in 14 games. However, his points-per-game average has declined, and he’s not that far ahead of Etienne. Given more opportunities, the younger back should surpass him in all categories.

With Alvin Kamara struggling and the injury history that lingers with JK Dobbins, I feel comfortable moving Etienne ahead of both of these players in the current RB rankings.

The cream stayed at the top, as expected. Justin Jefferson, Cooper Kupp, and Ja’Marr Chase all did their thing and will continue to do so, hence the positioning up at the top. We have a wideout who may be on the cusp of being a top-ten fantasy asset.

After scoring 55 points in their first two contests, the Washington Commanders seemed to have arrived offensively. Unfortunately, it appears to have been fool’s gold. Carson Wentz has turned into, well, Carson Wentz the past three games when a total of 35 points (11.66 per game) were scored. McLaurin is feeling the brunt of his performance.

The wideout is playing plenty, logging an 88% or above snap rate and the targets are also there. The only thing that isn’t evident is the touchdowns. McLaurin has just one receiving score on the year. Wentz has thrown for ten. Even Dyami Brown has two touchdowns on the season. That isn’t a formula for success for a player ranked as the WR22. Jahan Dotson hasn’t played the last game and a half and has four scores on the year.

It’s fair to ask if McLaurin should have been ranked this high to begin with. We knew what Wentz was, which is an average starter at best. Washington drafted Dotson in the first round, indicating that they felt they needed a receiver. McLaurin has been “serviceable” but has never finished a season higher than the WR19, and his points per game continue to decline. Until there is an upgrade at the quarterback position, there likely won’t be a spike in scoring by the Commanders.

Marquise Brown sits behind McLaurin in the rankings and should easily pass him with the next update, and his teammate Dotson (when healthy) is a more viable dynasty asset.

The tight end position will be right behind the running backs regarding their volatility in ranks. With the scarcity of the position, we are always on the lookout for the next big thing. Perhaps a chip off the block is the answer for 2022.

Could it be that all it took to unlock Njoku was Jacoby Brissett? Probably not, but whatever is happening in Cleveland, it is working. The 26-year-old currently sits as the TE7 five games into the 2022 season. He is also ranked ninth in targets amongst the position with 29. We’ve known for years that he is long on talent; he has just lacked opportunity. Everyone’s other favorite breakout tight end, Noah Fant, has yet to meet the points per opportunity of the veteran. The Browns lack a true red zone threat at the receiver position, which has led to the tight end leading the team in targets inside the 20. Amari Cooper is converting more of the opportunities down there, but opportunities are always valued.

Head coach Kevin Stefanski has some history of success coaching the position. Kyle Rudolph saw his best years with Stefanski heavily involved in the offense. When Deshaun Watson comes back, we could see even more usage. The sky is the limit.

The aforementioned Noah Fant and Mike Gesicki are two players I have no issues placing Njoku in front of in the rankings. He could soon surpass the likes of Dawson Knox if things continue as they are.

He graduated from SUNY Alfred State in 2015 with a bachelor's degree in Technology Management. When he is not writing or playing video games, Jeff spends time with his wife Naomi and their Bichon Poo, Daisy.
Latest posts by Jeff Smith (see all)
Dynasty Top 250 Fantasy Football Rankings: Movers and Shakers