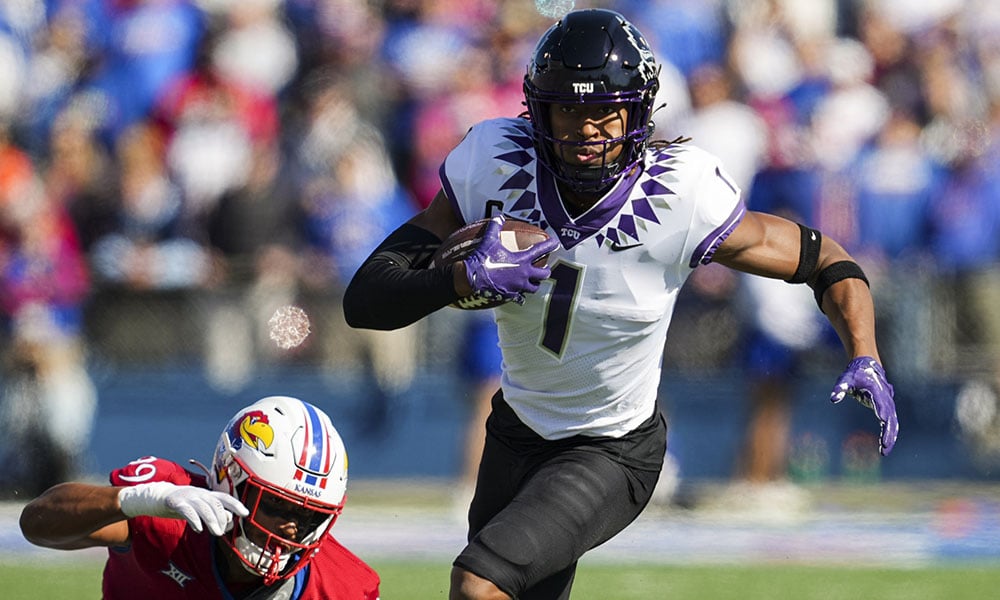 Which young players are in the spotlight this week?

Though most devy drafters preferred the younger Donovan Edwards on the Wolverines, Corum has taken the Hassan Haskins bell cow role. After another dominating performance this week against Indiana, NFL scouts are moving Corum up their boards. Though he is a bit smaller than a typical NFL running back, his speed and vision are pro-ready for big runs. With 11 touchdowns already this season, Corum has even shown red zone efficiency along with home run ability. He is a name to keep in mind for the future.

Past appearances on this report have not been glowing, but Johnston stepped it up in a tight game against Kansas as a focal point for the Horned Frog offense. There was not much doubt in his athletic talents, but his separation was lacking up until the Kansas game. His 206 yards receiving with a great touchdown play included is enough to put him back on the top wide receiver radar. Not only was there separation, but Johnston is a monster after the catch. The first round is back as an option for him.

The Colts/Broncos game last Thursday was a dumpster fire, but Pierce was a shining spot for dynasty owners who have been patient with him. He became the clear second target on the offense hauling in eight of nine targets for 81 yards. Matt Ryan is developing a clear rapport with Pierce and giving him targets both shallow and deep. His size and speed should allow some big plays to develop and grow his potential to be a fantasy asset this season and in the future.

After an anxious beginning to the season, Hall owners have been rewarded with an average of 20 touches over the last two games. Hall has a rushing TD in each game and is showing the talent that made him the top RB in this year’s draft class. With the struggles of Jonathan Taylor, Hall is on top of the dynasty world and potentially the highest-valued RB in all of fantasy football.

Rashaad Penny is out for the year with a broken tibia, so Walker will have his chance to be the main runner for the Seahawks. With the offense being a surprise breakout this season, Walker should have opportunities to score TDs and fantasy points. With eight rushes for 88 yards and a TD this past week against the Saints, his track record is starting already. Expect big things for the rest of the season and the security of the top position on the Seahawks for the foreseeable future.

One of the biggest fantasy disappointments of the season, Harris’s dynasty value continues to spiral. Over the past two games, rookie Jaylen Warren has taken 75% of the third down snaps, leaving Harris with early down work. Combining this with his inefficiency on the ground (he has the third-lowest YPC in the league at 3.2) is not a recipe for fantasy success. He clearly is not 100% after suffering a Lisfranc injury earlier this year, but selling Harris looks like a good option sooner rather than later.

Damien Harris is likely to miss some time with a hamstring injury which leaves Stevenson with a great opportunity to take over the backfield. His bell cow status was seen last week in a big blowout against the Lions. Stevenson rocked 27 touches for 175 total yards in that game, including a big 49-yard run. Dynasty owners have known his talent, but the infamous Patriots RBs have been a fantasy curse for a while. With a lack of depth at the position for the team, Stevenson may be forced into a ton of snaps and opportunities.

Shane Hallam
Contributor at Dynasty League Football
Shane has been analyzing and writing about the NFL Draft and fantasy football for over 15 years. He is currently a Managing Partner at DraftCountdown.com and co-host of the Devy Marketplace Podcast. He was the winner of the "Top 100" contest at Huddle Report in 2015 and 2020 in predicting the NFL Draft.
Latest posts by Shane Hallam (see all)
Dynasty Fantasy Football Rankings: Cornerstone Report, Week Seven