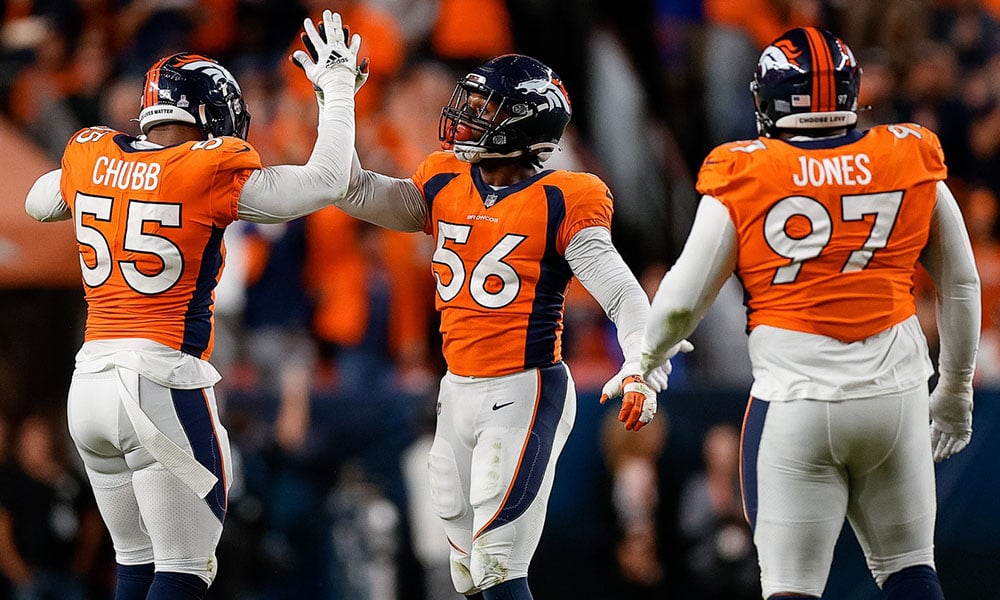 Need to find some IDP options on the waiver wire this week? We have got you covered.

We’re through five weeks of the 2022 season and I’ve realized a sad truth with many of my teams. The worst part is some of the rosters had the look of a league winner just one month ago. Injuries are partially to blame, sure, but I made my share of bad bets. And I’m consistently guilty of hanging on to hope a little too long, but it’s clearly time to take the advice of Wyatt Bertolone from his late September article, “To Rebuild or Not to Rebuild,” take a hard look at the man in the mirror, and start shifting focus toward 2023.

Bearing that context in mind, and knowing some of you are in the same boat, I’ll start working into this column a few deep dynasty plays. These are IDPs with little-to-no immediate appeal, and potential for a major role as early as next season. And in leagues that determine draft position based on potential points instead of records/overall position in the standings, it makes sense to roster some of these stashes instead of productive cornerbacks or roster cloggers that are actually working against your 2023 draft standing.

Before getting into this week’s waiver wire, keep in mind when reading:

Browning was featured in this section last week following Randy Gregory’s knee injury, which at minimum will sideline the veteran the next three weeks. I had a lot of questions this off-season following Browning’s transition from off-ball linebacker to edge, but he justified that move in week five with one-and-a-half sacks on six – six! – quarterback hits and ten pressures, per Pro Football Focus. Browning was easily Denver’s second-most productive fantasy edge behind Bradley Chubb, with five total tackles (two in the backfield) on 43 snaps. After last week he’s in all likelihood not available in any true position leagues, but he’s worth another mention. Note that he suffered a sprained wrist during the game, but it’s not expected to cause him to miss time.

I’m not a big fan of Muhammad, especially from a dynasty angle, but I do like him in week six going against Cornelius Lucas, who is filling in for the injured Samuel Cosmi at right tackle for Washington. I’d actually be good with any of the Chicago edge rushers – Trevis Gipson, Robert Quinn and Dominique Robinson – on teams you need a streaming start, but Muhammad seems like the most likely option to be available in dynasty leagues. (Should Gipson be available, I’d prioritize him.) The Commanders are a good matchup for edge production, and you need a reason to tune in for Thursday Night Football in the Windy City, right?

Last week I mentioned Odeyingo, Indianapolis’ 2021 second-round pick out of Vanderbilt, as a young edge to consider rostering based on 2023 opportunity should Yannick Ngakoue exit as a free agent. Kwity Paye’s high ankle sprain will provide an immediate boost for Odeyingbo’s snap share, so be sure to check his availability. On a career-high 40 snaps versus the Broncos, Odeyingo tallied half-a-sack on two quarterback hits to go along with a solo tackle and three assists.

If you are stuck, and I mean absolutely stuck at defensive tackle in week six, I’d give Godchaux a shot. I know he mostly plays a less-than-desirable role for fantasy as New England’s primary nose tackle, but he does have a prime matchup in week six against Cleveland, and Godchaux is unlikely to earn you a goose egg.

Hall is certainly more of a dynasty play than a lineup consideration right now even with two sacks on four quarterback hits over his past three games. The versatile rookie, chosen with the first pick of the second round, picked up a sack and three solo tackles (two for loss) against Atlanta while playing his highest snap total on the season with 38. I’d be sure he’s rostered in five-position leagues, especially in true position formats where he’s classified as a defensive tackle.

I didn’t expect Tremaine Edmunds to sit in week five, but when I saw the Buffalo inactives, my thoughts immediately turned to the rookie Bernard. Like Mike Woellert, I totally forgot about the existence of Dodson, who had a monster day with a sack to go along with seven solo tackles and four assists. Bernard had a decent day, with six combined tackles, and I’d look to add him in any dynasty leagues where he’s available. The third-round pick may slide into the starting lineup next season if the Bills pass on bringing back Edmunds. As for Dodson, he’ll be worth starting lineup consideration should Edmunds or Matt Milano miss time.

Robinson is a somewhat interesting stash for your non-contenders. A seventh-round pick, Robinson quickly reminds Steelers fans of Vince Williams, who enjoyed a handful of fantasy-relevant seasons during his eight-year NFL career. Robinson’s lack of length – he doesn’t quite reach six feet in height, and his sub-30-inch arms are T-Rex-like – limit his ability to play in coverage and possibly finish as a tackler, but he does have short-distance burst and closing speed to pair with serious strength. Those attributes give the Ole Miss product upside as a blitzer, and he could pair with Myles Jack in the starting lineup in 2023. First-round bust Devin Bush and Robert Spillane are below-average NFL players, and both are free agents next off-season. And Robinson showed well this preseason with smart and physical play.

Mark Robinson showing how you work through slant/flat. Don't go under, don't go over, run your face through the receiver. That's his mentality all the time. #Steelers pic.twitter.com/Cy5nTOUBiV

Tae Crowder again led the Giants’ linebacker corps with 50 snaps, but he’s really a poor excuse for a starting NFL linebacker. Smith wasn’t much better during his final season with the Cowboys, but he’s an upgrade over Crowder, and should eventually supplant him as the primary linebacker for Big Blue. Smith posted two solo tackles and four assists on 41 snaps against the Packers, and should be rostered as a depth linebacker with LB3-4 potential later this season.

I have no idea if Collins will actually work his way onto the game day 53, let alone have any fantasy value, but he’s a true box safety on a Giants team devoid of quality linebackers. Collins is simply a practice squad addition for Big Blue at the moment, but he’s worth a fantasy flier in case he actually sees playing time as he could quickly ascend over the likes of Jaylon Smith and Tae Crowder. I snapped him up in almost all of my leagues when I saw the signing.

Giants have planned to use Landon Collins in more of a linebacker role. Between Collins and A.J. Klein, two established veterans bolster a depleted position.

I don’t think he’s the long-term answer at safety opposite Derwin James, but Gilman supplanted Nasir Adderley at free safety and ran with the opportunity, nabbing an interception on an end zone pass that prevented Cleveland from taking a fourth-quarter lead. Gilman added four solo tackles and three assists. I’d consider him a short-term depth option at safety and nothing more.

Atlanta turned the keys over to Richie Grant and Hawkins at safety this year, and in spite of high snap counts, Hawkins really hasn’t produced much to speak of. He hit double-digit tackles for the first time in his career against Tampa Bay, finishing with seven solos and three assists. In most leagues safeties are plentiful, but if you’re struggling to find decent depth, Hawkins should be on your radar.

Josh Jones has disappointed us yet again, and has ceded Seattle’s strong safety job to Neal. The fifth-year safety has been fantasy viable at various points over the past two seasons, so it shouldn’t surprise us to see him in a relevant role once again. Against New Orleans, Neal collected two solo tackles, six assists and a pass defensed while playing 77 snaps. Given the work he sees in the box or at the line of scrimmage, he’s definitely worth an add on teams you’re short on safety options.

The rookie Woolen has obviously been a fantasy CB1 on the season, and on Sunday nabbed an interception for the third game in a row, but all three are worth starting CB1 or CB2 consideration with the Cardinals on tap in week six. Arizona is easily tops for opposing cornerback production on the season, and Vegas has Seattle-Arizona as one of the higher point totals among week six opening lines.

Woolen is almost always lined up on the right, so he’ll likely be over the heavily targeted Marquise Brown for the most part. Bryant is the Seahawks’ primary slot defender and should see a lot of Rondale Moore.

The 49ers took a beating on the injury front in a beat-down of Carolina. Nick Bosa‘s “tight groin” is certainly of concern (maybe they can get that poor Giants trainer to work on it), but Emmanuel Moseley’s torn ACL was the bigger blow. Womack, a rookie fifth-rounder, seems to be the most likely candidate to man the spot, although Lenoir may slide out from his slot defender role. We should also eventually see Jason Verrett‘s return to the field. For fantasy purposes I like Lenoir best, and he’s been productive lately, including eight total tackles against the Panthers.

Jason King
Contributor at Dynasty League Football
Jason is a lifelong Steelers fan and proud alumnus of NC State University. He caught the fantasy football bug in 1996, and has a strange but strong affinity for IDP dynasty leagues with multiple copies of players. When he's not thinking about fantasy football, he's doing something with his two children, dabbling with photography or fixing something around the house.
Latest posts by Jason King (see all)
IDP Dynasty Fantasy Football Waiver Wire: Week Five