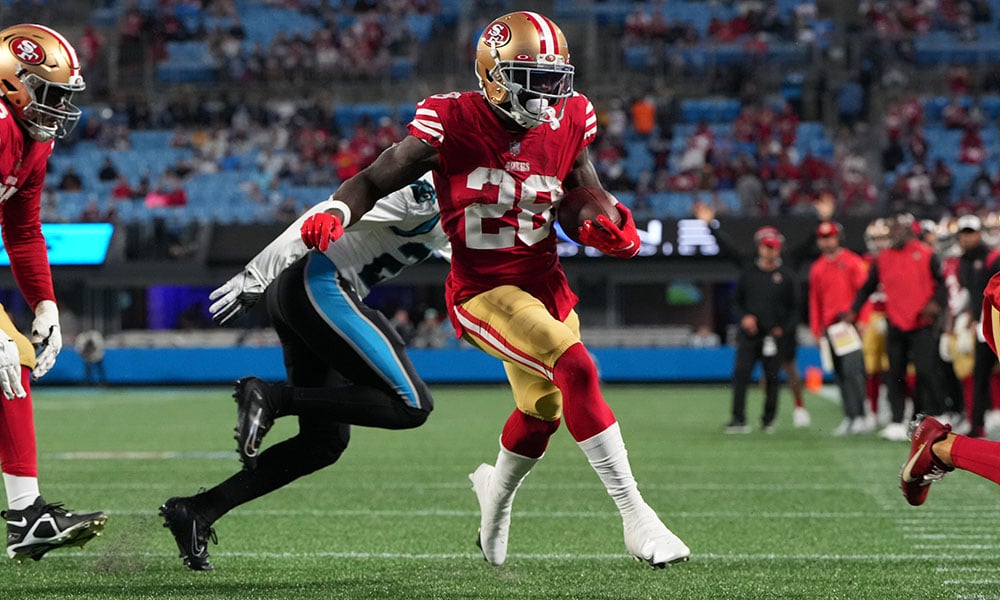 In case you are reading this, there is one bit of information to know before you start reading names. Just like last year’s series, we will be utilizing player rostership percentages, courtesy of real dynasty rosters from 1,700 MFL leagues. While this may not be entirely accurate for every individual league, it is very reflective of how managers view who is worthy or not of a roster spot. Now that that’s covered, let’s dive into the waiver wire after week five! I decided to combine the two quarterbacks this week because they are in very similar situations for how I would be attacking each on waivers in superflex leagues. In 1QB, don’t worry about it. Both QBs were the third-string options on their teams and both looked relatively decent in their playing time so far. Of the two, I would much rather have Zappe as he was the better prospect, has looked better in his NFL playing time, and I believe could have more time as the starter than Thompson moving forward.

Both Tua Tagovailoa and Teddy Bridgewater are in concussion protocol, which in a vacuum, is usually a quicker turnaround than most injuries, but we know what the story is in Miami here. However, if either QB returns for Miami, Thompson is back on the bench. Zappe only has to worry about Mac Jones, who was reported to have suffered a “severe” high ankle sprain that was originally thought to need surgery. A second opinion changed that diagnosis, but still, a high ankle sprain is no joke for a young, franchise QB. It’s quite possible the Patriots take their time with Jones and play Zappe until their bye week in week nine, as they play the Browns, Bears, and Jets as their next three opponents, all teams Zappe can compete with himself.

We’re about to hit a massive bye week stretch for a lot of elite quarterbacks, starting with Derek Carr and Jared Goff this week, then Josh Allen, Matthew Stafford, Kirk Cousins, and Jalen Hurts in week seven. It’s possible that you might need a quarterback as a spot start for one of those bye weeks, and Zappe has shown he can be moderately trusted for 15 fantasy points, and maybe Thompson can too against Minnesota and Pittsburgh with the weaponry he has to work with.

I again wanted to combine these two just to showcase my confidence in both as waiver wire pickups again this week. Both players had solid opportunities this week against each other, with Jackson taking over the RB1a role after Nyheim Hines got hurt, and Boone being the solidified RB2 behind Melvin Gordon.

Both players need to be on dynasty rosters in basically every dynasty league. Boone is my preferred pick of the two over the rest of the season because he’s only really competing with Gordon since Javonte Williams is done for the season (no, I’m not scared of Latavius Murray). Jackson may be the better pickup in the short-term as he is more widely available still and both Jonathan Taylor and Nyheim Hines could potentially miss next week’s game, making Jackson a near must-start against Jacksonville. However, we know both Taylor and Hines should return soon, making Jackson a tougher sell over the entire season, but one more spot start should be well worth the price to add him now.

I didn’t include Williams in my article last week (shame on me), but I did include him in my waiver wire video on DLF’s YouTube channel. I also made a tweet about it too…

Ok, sorry, back to Williams. Last week, everyone was running to their waiver wires to pick up Tyler Allgeier and Caleb Huntley after the news of Cordarrelle Patterson going on IR. For some reason, everyone wanted to pick them both up so they could play them against the Bucs this week (sarcasm). While everyone was adding those two backs, the real add was and still is Damien Williams, who is eligible to return off IR starting this week. Williams will be the starting running back for the Falcons when he returns, as he was the RB2 with Patterson to start the season and neither Allgeier nor Huntley did enough to change that fact.

It might be a tough sell to advise starting Williams this week against the Niners in his first week back, and again the following week against the Bengals. However, he will get his shot against Carolina in week eight, who just got obliterated by Jeff Wilson Jr and Tevin Coleman, and have been crushed by running backs all year – that’s the game I want Damien Williams for. So add him and stash him now before he actually starts playing snaps again.

Speaking of Coleman, let’s discuss him for a second. In kind-of-surprise fashion, Coleman was activated from the practice squad and immediately placed into the RB2 role in San Fran this week against Carolina, where he proceeded to record 11 touches for 67 yards and vulture two touchdowns from Jeff Wilson Jr (sorry, Wilson managers).

In case you haven’t been paying attention, Jordan Mason ain’t it. Tyrion Davis-Price has been out for three weeks now with a high ankle sprain, and might continue to miss games. And we all know that Elijah Mitchell has been out since week one and may not return until November. So right now, it’s Wilson and Coleman for the Niners’ backfield.

Coleman isn’t highly rostered – available in over 80% of dynasty leagues – but I don’t think he’s a “sprint to the waiver wire and spend all your FAAB” kind of guy right now. My advice would be to swing low with your FAAB, maybe only a couple percent, and see if you can get him if you have a roster spot available. If you have guys like Kenyan Drake, Giovani Bernard, Mike Davis, Ke’Shawn Vaughn, some of y’all still have Julius Chestnut out there, all those guys can be dropped for Coleman right now. He probably won’t be anything, but just in case Wilson sprains his ankle or catches the flu on Tuesday, Coleman would be the next man up.

Finally, we get to who I believe to be the most under-appreciated handcuff in dynasty right now, as that torch has now been passed from Jamaal Williams after his time as a starter. We had the scare this week, as Saquon Barkley missed a bit of time against the Packers with a shoulder injury before coming back in and sealing the win for the Giants, but we had the scare. While Barkley was out, it was Breida who took the majority of the snaps and touches out of the backfield, finishing with 27 yards on six touches. I get that’s not an impressive stat line, but the point is the usage with Barkley on the sideline.

Should Barkley miss any time at all (*knocks vigorously on wood*), Breida would be the guy to get the nod and could be a flex consideration in your starting lineup. Is he good? Not particularly. Does it matter? Not at all, as long as he gets that usage. If Kalen Ballage can have three top-16 weeks in place of Austin Ekeler, Matt Breida can do it too in place of Saquon Barkley. The fact that he’s only rostered in 72% of leagues and is more available than Latavius Murray, Kenyan Drake, Caleb Huntley, Chris Evans, Trey Sermon, Trestan Ebner, Jordan Mason, Myles Gaskin, and Ronald Jones is actually insulting. This is the RB2 behind the fantasy RB1 right now who has battled injuries for the last two years and no one seems to care! Fix it, DLF members!

Curious what you think about keeping Tyrion Davis-Price. He isn’t officially on IR so can’t move him off the active roster. Have been holding because of what Coleman did yesterday, figure whoever is running in that backfield has value. Will he get a shot again when healthy or will Coleman’s familiarity with the system and what he did yesterday be enough to keep him running as the #2 until Mitchell is back? If you’re a competing team would you drop TDP for Coleman?

I would rather have TDP than Coleman. I think Coleman is just there getting work now because no one else really is, but when TDP returns, he’ll be the number 2 guy with Wilson, until Mitchell returns.

Think it’s safe to drop Greg Dortch for any of these guys?

I would guess there might be someone better to drop still at this point, but push comes to shove, yes.

Are we dropping Penny in Dynasty for one of these guys?