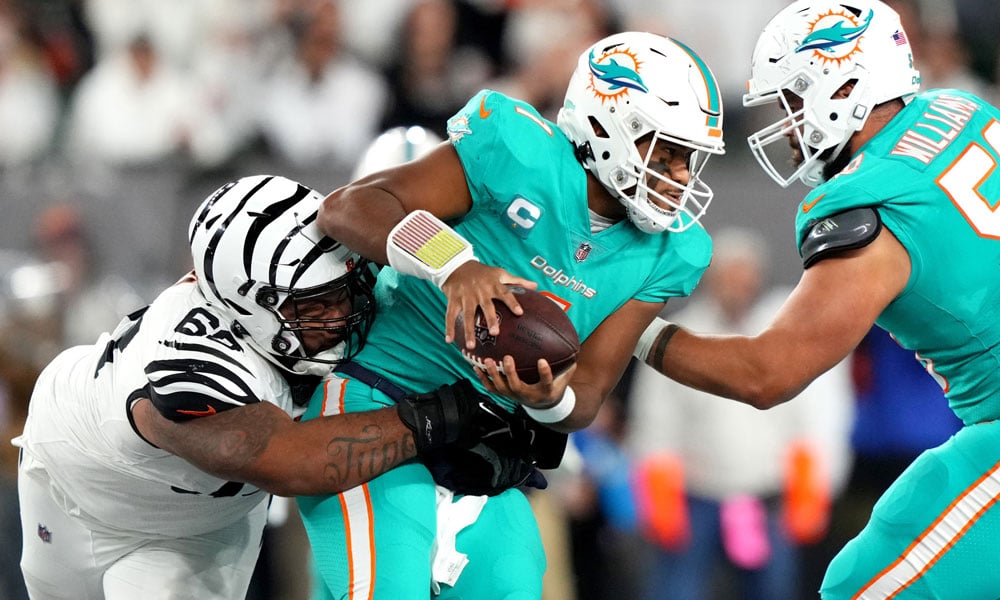 We round up the latest injuries affecting your dynasty rosters.

My name is Jeff Mueller, a Doctor of Physical Therapy, and I am here to help guide you through these weekly injuries and provide (hopefully) helpful insight into how bad the injury is and what the expected timeline for recovery is for your key player. The weekly injury roundup will be posted on Wednesdays to discuss injuries that just occurred. I would also encourage you to tune in to the DLF YouTube channel (make sure to subscribe!) for FREE helpful content throughout the week.

Fantasy Impact: Jones suffered a severe left high ankle sprain in week three and will be out for an extended period of time. Jones was spotted at practice, but hard to say how close he is to playing. Brian Hoyer suffered a concussion in week four, so Bailey Zappe may lead this team for the time being.

Fantasy Impact: Dak will reportedly push to play this week, but I’m still not certain he’ll be able to. It all depends on his ability to grip the football pain-free without fumble risk, as well as displaying good accuracy and velocity in order to return. Cooper Rush has been adequate for the time being, so I would expect Dallas to play it safe with Prescott’s return. I do believe we will see him return before their week 9 bye week.

Fantasy Impact: Winston reportedly pushed to play in week four, however was not cleared. The team may have wanted to give him a week (maybe two) to heal from his back fractures, so we’ll have to keep a close eye on this. Hopefully he can return soon.

Fantasy Impact: Tagovailoa has already been ruled out for week five. This will likely be a slow process, as Miami will have to take this very slow to avoid an even bigger media storm.

Fantasy Impact: Jones suffered a high ankle sprain in week four, having to leave the game but then having to re-enter after Tyrod Taylor suffered a concussion. The Giants are reportedly optimistic about Jones playing, but let’s see what his practice status is. I think he could miss a few weeks.

Fantasy Impact: Despite the rumors of a left high ankle sprain, Taylor thankfully did not suffer a high ankle sprain. He actually suffered a Right low ankle sprain and has a shot at playing this week, even on a short week for Thursday Night. Keep a close eye on his status. While the team is optimistic, due to the short week, I’m planning on him missing one game and then returning for week six. Also of note, he was spotted in a boot.

Fantasy Impact: This one hurts, as Williams was hyped up and expected to have a massive year this year before suffering the significant injury. The PLC portion is a posterolateral corner injury, not a PCL injury, but it might as well be just as bad. For simplicity sake, we can put Williams on the JK Dobbins return to play timetable, although Williams’ injury is less severe than JK’s (ACL/MCL/PCL/meniscus plus hamstring tear). I won’t be surprised to see Williams either active for week one of 2023, or start on PUP and active by week five.

Fantasy Impact: Patterson suffered an aggravation of his prior knee sprain that he had been dealing with and now requires surgery, likely an arthroscopy to address a meniscus tear or cartilage. I do believe he will have a decent chance to return within 4-6 weeks, however who knows if Tyler Allgeier will steal his job while he’s on IR.

Fantasy Impact: Per source, Montgomery does not have a high ankle sprain and had a chance to play in week 4. I would expect him back at least by week 5, but keep a close eye on his status. His knee is reportedly fine. If Montgomery is active for week 5, I’d keep him on your bench as he’ll likely be on limited snaps.

Fantasy Impact: Swift’s injury is most likely a grade two AC sprain and HC Dan Campbell has already stated he will likely benefit from a few weeks off until after the bye (week 6). I would expect him to return week 7. Notably: he suffered a Right AC sprain last year in the Thanksgiving game, but did deal with a Left AC/Shoulder sprain in 2019 at Georgia.

Fantasy Impact: Hill was actually out-performing JK Dobbins on a per touch basis the last two weeks until suffering a hamstring strain on an outside run. With the combination of missing time, JK Dobbins’ ramp up, and Gus Edwards’ activation window opening up for a potential return, I would not expect much moving forward from Hill.

Fantasy Impact: Allen reportedly did not suffer a reinjury last week, he simply wasn’t ready to return, which is good news compared to a potential setback. Allen will attempt to ramp up practice reps this week with a decent chance of returning for week five.

Fantasy Impact: The good news is, this recent toe injury is not on the same side as his prior ankle/deltoid injury (that was his left ankle/foot). Everything I’ve read is indicating that this toe injury is mild, however if it is Turf Toe it could cost him 1-2 games. Monitor closely. If he is able to get in Limited or Full practices and is active, I think you can start him this week. London game, baby.

Fantasy Impact: Do not be surprised if Godwin pops up on the injury report with a hip or back injury. I expect him to be limited, but likely to play in week five.

Fantasy Impact: Higgins suffered a mild ankle sprain on Thursday night, but it reportedly will not keep him from playing this week.

Fantasy Impact: ARSB suffered a high ankle sprain and was unable to play in week four. With the Lions bye week in week six, I would plan on ARSB sitting out week five and returning week seven, similar to Swift.

Fantasy Impact: Ron Rivera has already stated that Dotson is likely to miss several weeks, so plan accordingly. With Brian Robinson’s impending return, I would anticipate more targets towards Antonio Gibson and Curtis Samuel to fill-in for Dotson.

Fantasy Impact: Meyers was reportedly close to playing last week yet again, but wound up being inactive. Keep a close eye on his practice status. I do think he returns soon.

Fantasy Impact: Unsure if Burks will wind up on IR, but I do believe there’s a possibility of that occurring. Even if he doesn’t, I don’t expect him to return for several weeks. This was not a mild case.

Fantasy Impact: Crowder suffered an ankle fracture on a punt return. With Isaiah McKenzie dealing with a concussion, Khalil Shakir might be next man up, though I don’t expect McKenzie to miss much time, if any at all.

Fantasy Impact: Bateman reportedly has a midfoot sprain, likely low-grade Lisfranc. He was spotted wearing a boot, but no word on requiring surgery. I would plan on Bateman being out for several weeks to let it fully heal, so this could provide a huge boost to Devin Duvernay.

Fantasy Impact: Last I saw, Bellinger was getting XRays for something, but I haven’t been able to find concise information. It is likely a non-issue, but keep an eye on his status.

Jeff Mueller
Contributor at Dynasty League Football
Jeff is a Doctor of Physical Therapy with a specialty as a Certified Speed & Agility Coach. He enjoys outdoor activities such as hiking in Yosemite with his wife and dogs and has been an avid football fan since birth (go 49ers!). He also firmly believes that everyone needs to invest in a home gym with multiple TVs to watch all of the games on Sunday while working out.
Latest posts by Jeff Mueller (see all)
Dynasty Fantasy Football Injury Report: Week Four