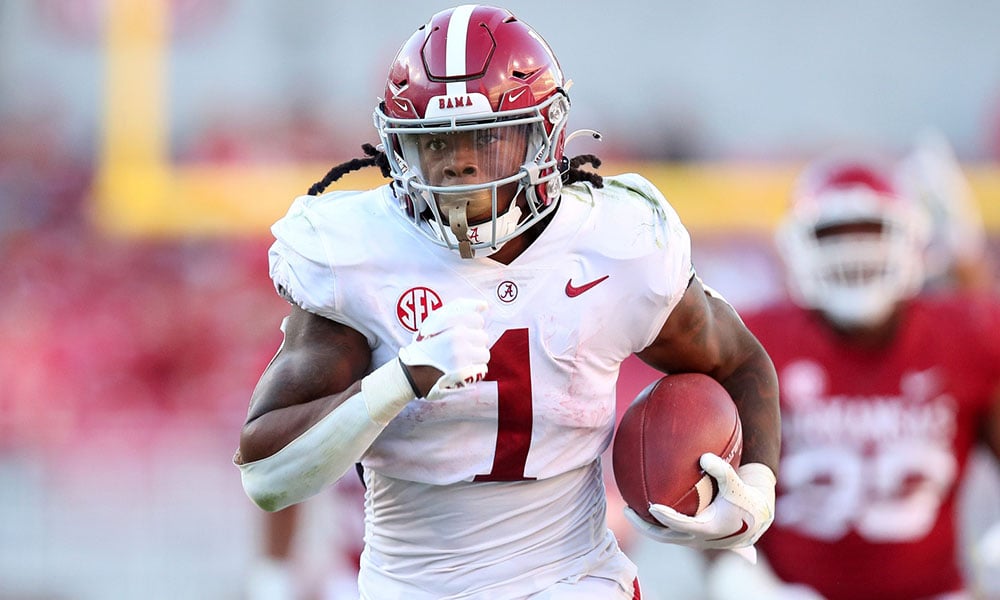 Bruce Matson rounds up the top devy performers this week and some names you need to know.

We just wrapped up another entertaining slate of college football action. As we get deeper into conference play, we will get to enjoy some must-see matchups as the stakes get higher each week. October is when college football starts to hit full stride and the action will be packed from noon until it’s time for Pac-12 after dark.

Judging week five from a macro-standpoint, the devy running backs overshadowed the rest of the prospects. We had a lot of explosive performances and big plays from some of our top rushers. We had a few surprise players. Since the running backs in the NFL have been very ambiguous this season, it’s good to see some talent show some promise in the minor leagues.

Maye is a future first-rounder, or at least looks like one. He led North Carolina to a 41-10 victory over Virginia Tech, passing for 363 yards and three touchdowns while also rushing for 73 yards and two touchdowns. He’s an accurate passer who can make all of the money throws. Look for him to receive more national recognition by the end of the year.

Against Arkansas, Bryce Young had to come out of the game due to an injury. Milroe came in and looked more than competent for a backup. He completed four of nine pass attempts for 65 yards and a touchdown. He also rushed for 91 yards and another touchdown. His touchdown run came on a 77-yard run where he got the opportunity to showcase his speed. His rushing ability is very important to note. He has the Konami code and if he develops into a valuable prospect, then he could be a big deal at the next level.

He’s going to break fantasy when he gets his shot in the NFL. Against Arizona State, he completed 27 of his 37 passes for 348 yards and three touchdowns while also rushing for 44 yards and one touchdown. Williams, in his second season, is already considered one of the top quarterbacks in college football. At this time, he’s just adding points to his draft pedigree.

In a layup game against Wagner, Tucker dominated, rushing for 232 yards for three touchdowns. He’s a menace to society once he starts running downhill. Tucker is ready to play on Sundays and has the profile of a three-down workhorse. I’m excited to draft him with some of my 2023 first-round rookie picks.

Nobody had a bigger day than Williams. He looked good. The 225-pound running back moves well for his size. He has power along with some swift feet. During Ohio State’s 49-10 shellacking against Rutgers, Williams churned out 189 yards and five touchdowns. He was a dominant force in this game and is building a resume for when he’s ready to come out for the draft.

All this guy does is produce. Against Wisconsin, Brown posted his fifth straight 100-yard performance. He carried the ball 25 times for 129 yards and one touchdown. After rushing for over 1,000 yards last season, it looks like Brown is going to finish this season as one of the most productive running backs in college football.

In a big win over Washington, Charbonnet carried the load demonstrating that he still has the goods to be considered a promising prospect in the 2023 draft. He rushed for 124 yards and one touchdown while catching three passes for 56 yards. This was his third 100-yard performance on the season. It’s clear that Charbonnet is one of the most underrated running backs in the country.

Gibbs cemented himself as one of the top running backs in the 2023 draft with his performance against Arkansas where he rushed for 206 yards and two touchdowns while catching two balls for 20 yards. He put the final nail in the coffin late in the game when he ripped through the defense for a 72-yard touchdown run.

Judkins is making a huge impression this season. In a conference game against Kentucky, the freshman rushed for 106 yards and one touchdown. His touchdown came on a 48-yard touchdown run where he showcased his explosiveness. This is the third 100-yard rushing performance of the season.

Brown only carried the ball six times for 27 yards but it was his fluidity of movement and short-area quickness that was on display. It’s always good to take a look at some of these freshman running backs to see what they look like against college competition. On the year he currently has 138 yards from scrimmage and one touchdown.

Flowers had one of the best performances of the weekend slate. His performance against Louisville is the stamp of his college career. When scouts look at his tape, they are going to reference this game. He was dominant, catching five passes for 151 yards and two touchdowns while rushing twice for 22 yards. Flowers made some big plays in this game.

Jayden Reed hauls in his first touchdown of the season🤧

The senior wide receiver is one of those prospects who are likely to shine during the draft process. Reed caught seven passes for 61 yards and one touchdown against Maryland. He’s a slick route-runner with smooth ball skills. He has been banged up, but it’s good to see him back on the field playing healthy.

Prentice had a huge 47-yard touchdown catch against Arkansas where he put his top-end speed on display. The freshman receiver is starting to make an impact on the offense. He was an underrated four-star recruit who was almost forgotten about due to the amount of talent that Alabama has at the receiver position. He’s a prospect that we need to keep an eye on.

Downs will be one of the best wide receivers in the 2023 NFL Draft. Depending on how many running backs get pushed up the ranks, Downs should compete for a first-round status in rookie drafts. If he slips, he will be a huge value. We saw him have another productive game against Virginia Tech, catching eight passes for 120 yards.

The five-star freshman wide receiver caught five balls for 56 yards in a losing effort against Mississippi State. It’s not a huge performance, but it’s good to keep a spotlight on those top-shelf prospects throughout the season to make sure they are doing something on the field. The fact that he’s earning targets early in his career is a good sign.

He posted another 100-yard game against Arizona State this weekend. He is on the road to being the top wide receiver prospect in the 2023 NFL Draft. Addison was the stimulus package to Kenny Pickett’s draft capital and could develop into one of the most coveted wide receiver prospects in the NFL.

Jacob Cowing with his 7th receiving touchdown of the season!

This guy is a monster. Imagine the buzz he would receive if he was doing big things with any of the premiere power-five schools. Cowing did his thing against Colorado, catching 12 balls for 180 yards and one touchdown. Right now, he’s just proving to NFL scouts that he can put up big numbers against the power-five competition on a consistent basis.

He’s an under-the-radar tight-end prospect who is putting together a strong sophomore season. Against Virginia Tech, he caught four balls for 98 yards and one touchdown. Nesbit is an athletic playmaker who excels at making plays downfield. He’s a player to keep an eye on as he develops.

Bruce Matson
Contributor at Dynasty League Football
I'm a financial counselor for a hospital in South Central Ohio. I graduated from Muskingum University with a bachelor's in business while minoring in Economics and Accounting. I won my first fantasy football title with Jake Plummer as my quarterback.
Latest posts by Bruce Matson (see all)
Devy Fantasy Football Wrap-Up: Week Five

Thanks Bruce!
This is one of the articles I most look forward to each week. Appreciate the work you put into these.