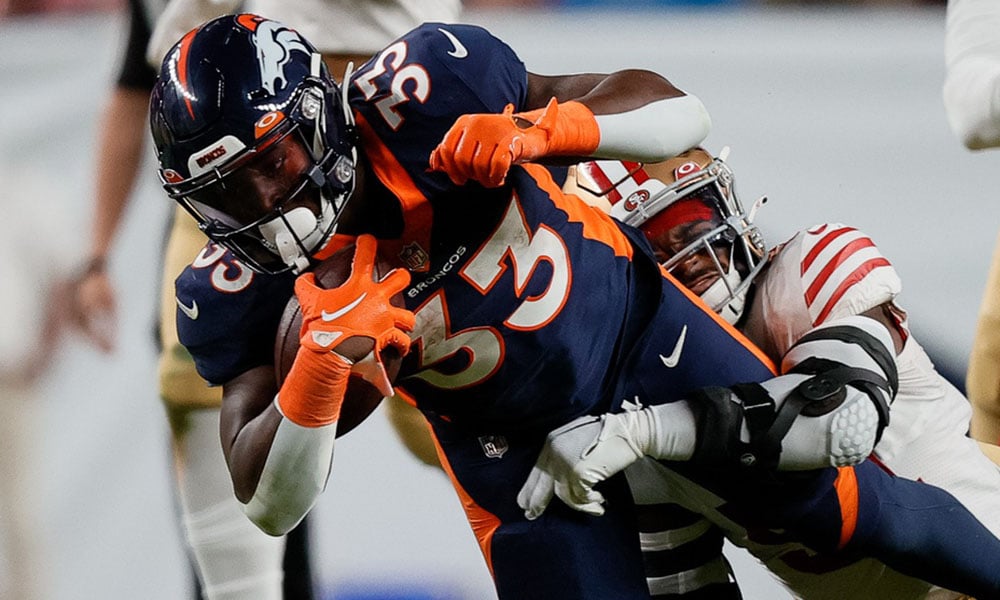 We break down the injury to Javonte Williams.

Dynasty managers were feeling pretty good about things going into Sunday. After all, the injury bug hadn’t been too bad this season. Well, that all changed on Sunday afternoon when Javonte Williams suffered what the Broncos thought was a “serious knee injury.” Unfortunately, that was indeed proven to be the case today as an MRI showed Williams tore his ACL, and LCL and will undergo season-ending surgery as a result. This is a massive blow to a struggling Denver offense and to the short-term dynasty value of Williams himself. Let’s take a look at the players affected with this unfortunate development.

Going into the off-season, the hype train was off the rails in regards to Williams. After all, he was coming off a rookie season that showed a tremendous amount of promise. In a part-time role last year, he posted 903 rushing yards, 43 catches, 316 receiving yards, and scored seven touchdowns while sharing the backfield with veteran Melvin Gordon. The allure of Williams’ long-term potential vaulted his dynasty value into the top round and he was widely viewed as a top five running back asset all Summer long.

Unfortunately for Williams (and his dynasty managers), the Broncos decided to bring back Melvin Gordon for one more season and re-create their successful committee. Still, Williams’ value stayed strong as dynasty managers were playing the long game and all the talk from Denver was in regards to Williams being the “1A” and not the “1B” this season. Through the first four games, that was quickly coming to fruition as Williams was showing good chemistry with Russell Wilson and Gordon was busy fumbling away his opportunity to make up any sort of ground. Unfortunately, Williams will now end his season with 404 rushing yards, 16 catches, 76 receiving yards, no scores, and a serious missed opportunity.

Williams’ dynasty value is going to take a hit after this injury and he’s likely to drop out of first round consideration. At this point, he’s our RB3 and that just isn’t going to be sustainable. However, there is some light at the end of the tunnel here. This injury seems almost like a rite of passage for running backs these days and nearly all of them return to perform very well post-surgery. The key here is going to be his timeline. We know he’s out for this season and the injury is severe enough that the Broncos could take it very slowly with him at the beginning of next season as well. We also shouldn’t expect to see vintage Williams in 2023 as it typically take a year for players to regain their explosiveness (see Barkley, Saquon). Dynasty owners could see this injury as an opportunity buy low. If you’re not a contender this season (and you should know that by now), it could be time for you to acquire Williams and send a contending team some “win-now” assets in return.

No matter how you cut it, this stinks for Williams. We get used to things like this because it’s part of the game. While the injury to Tua Tagovailoa seems to be more serious in real life, this is still going to be a serious obstacle for Williams to overcome and we wish him the best. It’s going to be very fun to watch our Trade Finder tool over the next few weeks as many dynasty owners are going to rush out and try to make a deal for Gordon. I’m not so sure I’m in that camp, however – at least not for the price some may expect in return.

Gordon has proven to be a very effective running back when healthy. Over his eight years in the league, the former Wisconsin standout has posted a solid 6,283 rushing yards, 292 catches, 2,293 receiving yards, and scored 68 touchdowns. The problem with Gordon has always been his tendency to fumble, however. Over his career, he has a whopping 25 of them, including four this season alone.

There’s little doubt Gordon’s workload is going to increase. However, this does not look like a situation where the Broncos are suddenly going to make him a bellcow running back. I expect Mike Boone to play a key role moving forward and Denver could also add another player to the mix here this week. My guess is Gordon is going to be more of a RB2/flex player this season instead of a RB1 “plug and play” type of an option. Still, this injury is again going to open up a solid short-term opportunity for him and in a year where running back production is way down, you could do a lot worse as Gordon is certainly going to try to make the most of his chance here and score a longer-term deal this off-season.

In terms of value, I could see Gordon fetch a second rounder in a dynasty league, but I can’t see many giving up first round rookie picks for this upcoming stretch of the season. Folks, meet your #1 waiver priority for the week. Boone has always flashed some ability and this could very well be the opportunity he’s been looking for. Over his five years with Minnesota and Denver, he’s only had 78 total attempts, but he’s averaged a healthy 5.6 yards per carry in his career. In fact, Boone actually played more snaps than Gordon after the injury this week and looked good in the process this week with 20 rushing yards on just three attempts. Even better, he’s never lost a fumble in his career.

While we don’t know much about Boone, we certainly will here in the next few weeks. While many dynasty managers are likely going to overpay for Gordon, Boone represents the better bargain in my mind. While he may not be the true “1B,” to Gordon, he’s one injury (or maybe even a fumble) away from a golden opportunity. If you have a chance to grab him on the cheap, make sure you do it. It may be (or not) well remembered that I was not into the hype and stated as such whenever given the chance. Even so, this is a terrible occurrence for the kid and I wish him a full, quick speedy recovery and an eventual return to prior form.

Hey Ken – how much FAAB are you looking to fork out for Boone? My RBs are JT, Dalvin Cook, Jones, Zeke, Gordon III, Hunt, Edmonds

Scooped Boone off waivers. We will see if anything pops for this guy.

J williams owner and looking for a rb replacement now and have a trade question. I was offered Penny and Walker for Herbert, Pacheco and a late 23 1st. Is that to much or should I pounce?

How does the addition of Murray to the backfield affect the outlook of Gordon and Boone?

I lean towards Murray as the better add here. Boone was mostly playing special teams and the immediate move to add Murray speaks volumes to me. Yes, Boone has upside, and I definitely think trust for MGIII is/should be waning, but Murray has a track record of popping up and producing. Very curious to see how this shakes out, especially if Russell can get his game out of the gutter.