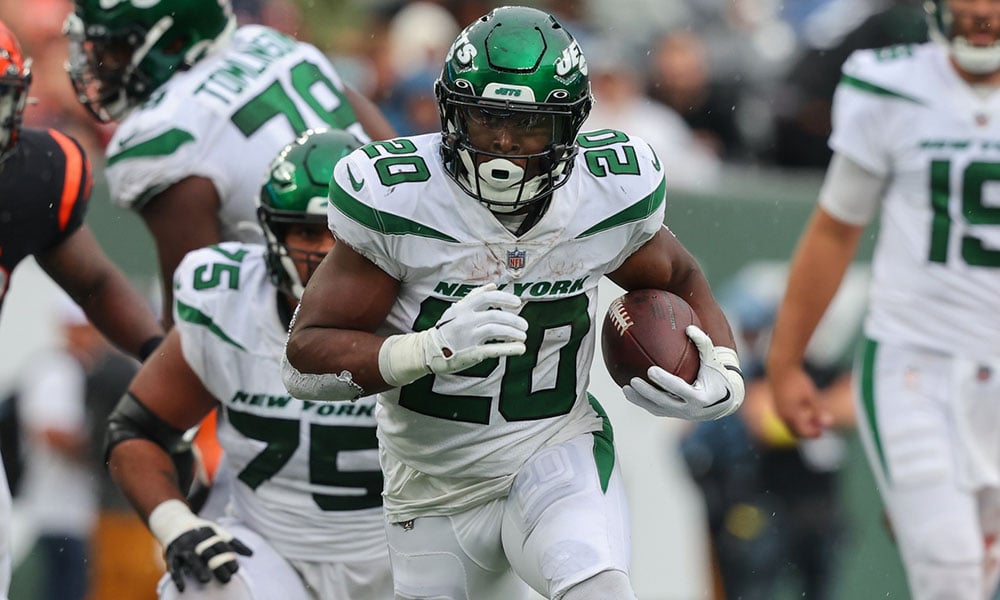 Norm Cruz is back to break down some of his ‘All-22’ dynasty creations.

Editor’s note: This article is by Member Corner writer Norm Cruz. Please thank Norm for sharing his content with DLF.

“Do you think all those rookies you drafted are going to hit? Have you gone back and looked at the rookie success rate? Obviously not, I have though. Only about 30% of the time do they hit. Good luck with your game plan.”

That is the constructive feedback I received from a league mate and experienced dynasty player during a startup draft in a $250 FFPC Superflex Best Ball Dynasty. In that startup (which I drafted in June), I employed the dynasty strategy which I call the “All-22”, which simply means drafting exclusively players 22 years old and younger. The All-22 is designed to put together a dominant team in year three that has a shot at winning as soon as year two if things break right.

Was the criticism fair? Maybe. There certainly is truth that rookies often do not pan out.

But whether fair or not, looking at results from the two years I have been employing the strategy, I have a good sense that the criticism will ultimately be proven to be wrong. You can check out my latest assessment of the All-22 in this DLF article I wrote recently.

However, those teams I drafted in the past two years have had the advantage of drafting out of a pool of rookies that many would consider to be extraordinary. 2022’s rookies, on the other hand, were not nearly as highly regarded and were/are looked upon by many as being unspectacular if not downright mediocre. So then, would an All-22 team drafted in 2022 be similarly mediocre?

Here was the draft board (through 14 rounds):

Assessment: An RB core of Breece Hall, Javonte Williams and James Cook is a great start. Depending on where my 2023 firsts fall, I would likely add another RB (Bijan Robinson). The initial WRs would consist of Rashod Bateman, Garrett Wilson, Chris Olave, Skyy Moore, George Pickens and Christian Watson. This group has the potential to be very strong and will get even stronger after adding a Kayshon Boutte or other elite rookie WR in 2023. Due to weakness at QB in a superflex league and at TE in a TE premium league, I am thinking that this team will be more likely to peak in year three than year two, so patience will be required. However, this team will win more than its fair share of championships when it is all said and done.

Here is another All-22 I drafted on September 7, 2022, this time a Live draft in the FFPC (non-superflex, 1 QB, 2 RB, 2 WR, 1 TE, 2 Flex, TE premium). Since this live draft filled just before the draft started, there was no opportunity to trade back or up or, more importantly, to trade for future first-rounders. I drafted straight from the 11th position.

Here is the draft board (through 14 rounds):

Assessment: If the first two weeks of the NFL season are any indication, this team could be competing in year one, thanks to WRs Jaylen Waddle, Drake London, Garrett Wilson and Elijah Moore. In an ideal world, the team would just miss the league playoffs and win the consolation tourney (which, in FFPC non-best ball dynasty leagues, decides which team gets the 1.1, 1.2 and so on). Can you imagine this team in 2023 with Bijan Robinson and Breece Hall at RB along with those WRs? Overall, I think this will be a super solid team at minimum with the potential to be great (like seemingly most of the All-22 teams out of the box).

Live Draft Notes: Employing the All-22 during a live draft can be tricky. When limiting picks to a small universe of players (in this case, only players 22 and younger), it can get difficult when you are not able to trade up or back to take the players where you think they should be taken in order to maximize the team. In this draft, at the 11-hole, I don’t know what I would have done had Breece Hall been taken at the 1.10. Who then would I have taken? Taking Elijah Moore at the 2.2 was already uncomfortable. I probably would have veered away from the All-22 at that point and just taken Jaylen Waddle at the 1.11, Kenneth Walker at the 2.2, Drake London at the 3.11 and then Garrett Wilson at the 4.2, ending up with a very similar team (in hindsight) but pushing up each player a round or so. I noted to myself after the draft that if I had to do it all over again but a day later, I would have gone Breece Hall at the 1.11, Jaylen Waddle at the 2.2 (pausing the All-22), Elijah Moore at the 3.11, and then Drake London at the 4.2 (interestingly ending up with the exact same team). All this is to say that in a live draft, you may need to move off of the All-22 for a round or two to keep your picks sane. Live FFPC startup drafts are so incredibly fun that I can easily look past the limitations.

Last but not least, here is another live draft (60-second timer), this one held on September 4, 2022. This one too was a straight draft from the 11-hole, no pre-draft trades and consequently, no future firsts.

Here was the draft board (through 14 rounds):

Assessment: I went in hoping to land Kyle Pitts at the 1.11, which was not all that far-fetched in a superflex format. When he was taken early, I accepted that I would stray from the All-22 and go with Justin Jefferson (as I could not pass up on that opportunity). Little did I imagine that I would land Lamar Jackson instead. I had no hesitation moving off of the All-22 for one round. At the 2.2, I had a tough call between Trey Lance or Trevor Lawrence on one hand, and Breece Hall on the other. I decided to go with Lance (which is a bummer now in hindsight), but Breece Hall, thanks to his disappointing preseason, slid to me at 3.11 anyway. Drake London at the 5.11, Garrett Wilson at the 7.11 and Jahan Dotson at the 9.11 were incredible values. Judging through week two, this team could mess everything up by making the playoffs in year one!

Live Draft Notes: I participated in three live dynasty startup drafts this summer and in all three, I ended up with the dreaded 11th pick. Besides the 12th pick, there was no slot that I wanted less than the 11th, especially in non-superflex. Thankfully, it turned out ok, especially here having the good fortune of landing Lamar Jackson. Interestingly, because I had my hands tied in a live draft and was prevented from trading for future first-rounders like I almost always do, I came out with teams more able to take advantage of the current rookie class. Had I traded for firsts as usual, would I have been able to take London, Wilson and Dotson where I did? These teams look much stronger coming out of the draft without the firsts, and I am wondering if this is ultimately the better way to go. Of course, I will probably feel different come next spring when I only have one pick in the first round.

Despite what many labeled a mediocre rookie class, the All-22 seems to hold up just fine. It may even be the lackluster impression of this year’s class that will be the reason these teams end up being so good, allowing an All-22 team to stockpile the rookie WRs later in the draft than it otherwise would have been (or should have been) able to. It will be interesting this time next year comparing how this team fared as compared to the year two versions of the 2020 and 2021 All-22 startup teams. I went into these drafts thinking there may be some step down given the strength of the prior rookie drafts relative to this one, but now I’m not sure of that at all given how late I was able to land top-notch rookie WRs. Overall, based on my experiences with the All-22, I would highly recommend the strategy to anyone, in any draft class.

And finally, circling back to the criticism, reconsider employing the All-22 if you get bothered when league mates criticize your team. When using the All-22 to draft a dynasty startup, you are likely to face a good dose of skepticism. One of the mental hurdles of any extreme play-for-the-future strategy in dynasty is that it can take years before a strategy produces results. Until then, if you are concerned about what the rest of the league thinks about your team, you could be in for a long (and consequently less enjoyable) next few years. By the time your successful strategy pays off and you hoist the championship trophy, it is very possible that the league mates that you so wanted to prove wrong will no longer be in the league to witness it.

Cool article! I assume you’re a Jets fan. I only wish I could stack Patriots.

Thanks! I am not a Jets fan, although I may have to become one.