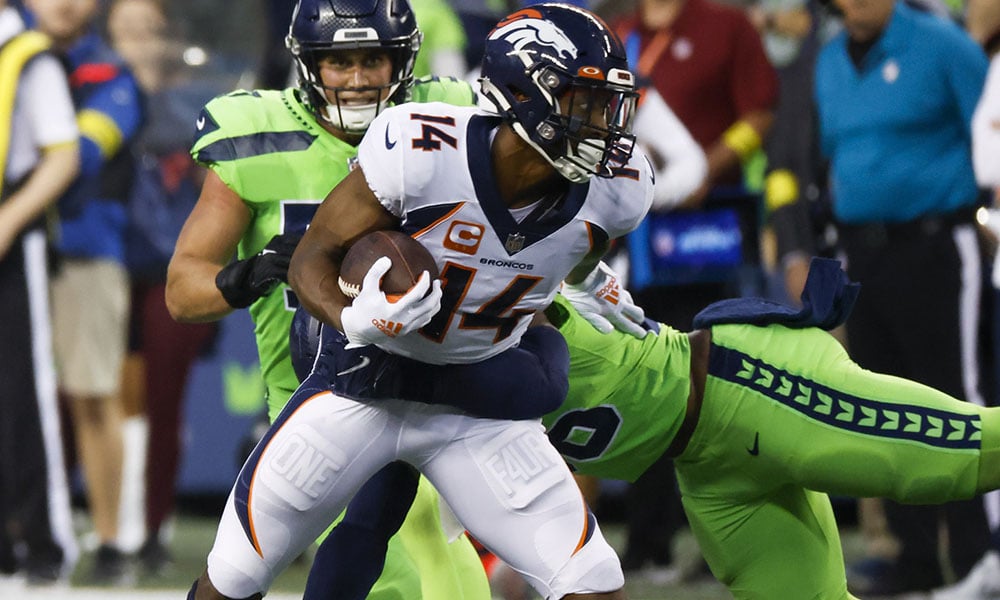 Dynasty Fantasy Football: To Rebuild or Not to Rebuild?

Are you in the mix for this year’s championship or does your team need a makeover?

To rebuild, or not to rebuild? That is the question.

It’s time to get real. Every dynasty fantasy football manager has a pivotal moment during the season where they need to put on a brave face, look at themselves in the mirror, and decide whether or not they are actually competing for a championship. It’s a hard conversation. Such self-reflection is not easily done. No one wants to be told you’re not good enough, especially not from yourself. But this conversation and when to have it is one of the most important events during a dynasty fantasy season as there is but one truth in your fantasy football leagues, there can only be one winner.

First, we must talk about timing, and when to actually have this conversation with yourself. Some people try to make a decision as to whether they’re going to try and make a run for the championship during the off-season, which is a mistake. I’m a firm believer that in the off-season, except for in extreme cases, there are no competing or rebuilding teams. There are just teams trying to improve their roster. Of course, there’s usually one team in every league in a hard rebuild with minimal talent on their team where you’re sure they’ve got no shot (you know who they are and if you don’t you need to look into the mirror for a different reason).

There is just too much that can happen once the season begins to decide your best course of action before the season. There were teams last year with Cooper Kupp and Deebo Samuel on their roster thinking they weren’t going to be able to compete heading into the year and then found themselves winning every week. On the flip side there were teams ready to make a run with JK Dobbins and Cam Akers until injuries thwarted their chances. Players emerge or fail to meet expectations. We’re all just guessing.

Once the season starts, for the first few weeks of the season, you should be trying to collect and analyze all the new data points we’re getting for players so that you can reevaluate not only your team but the other teams in your league as well. There are plenty of tools and resources here at DLF to help you do so including the ever-updating Dynasty ADP, Dynasty Rankings, and articles and podcasts.

Around week five or six of the season, I want to have a well-researched stance on where my roster is in the league in terms of overall talent and quality of rookie picks in addition to my head-to-head record and total points scored. Do you have quality starters and depth? How many rookie picks do you have and what round are they in case you need to use them as ammo for a new asset? These are the questions you need to ask yourself to figure out where you stand. Is your team in the top third of the league? You’re trying to win. Are you in the middle third? You’ve got a tough decision to make. Lower third? It’s probably time to think about next year. Be real with yourself. Are you 4-1 but third to last in total points? You’ve got a fraudulent record and need to adjust accordingly. Are you 2-3 but second in total points? You’ve probably got a better team than your record indicates.

Now let’s talk about what to do once you’ve identified your place in the league.

You are in the top third of the teams in your league, great job! Now it’s time for patience and continuous reevaluation. Ideally, your team is just great and no further moves are needed. This is unlikely, but it happens. More than likely, you’ll need to add a piece or two to put your team over the top. This is where patience comes into play. You need to wait for the right openings to pounce on adding players. This could be looking for buy-low opportunities on players you expect to rebound. It could mean waiting for teams in your league to realize they need to play for next year and start selling off their players.

Either way, when the time comes, don’t be afraid to pay the needed cost to get the players you want. I’d rather pay the appropriate cost for the appropriate players and lose than be timid in negotiations and regret it. We’re here to win championships. Maybe come week five the Leonard Fournette manager realizes they need to play for next year and put Fournette on the block, go get Fournette. Yes, he’s past the age apex for running backs and his market value likely only falls from here meaning he’s not a great long-term asset but he should still be highly productive this year and could help you win a championship. Don’t be afraid to pay market value for him even though he won’t be worth as much in six months.

You’re in the middle third of your league – this is not ideal but not all is lost. How did you get here? Did a couple of injuries hurt the start of your season? Do you have a bad record but a great team and lost to variance? Did you overachieve to this point with a bad roster? Basically, you need to figure out if you’re just a couple of moves away from being one of the best teams in the league or not. If I feel like I was just on the wrong side of variance so far and have a great roster then I’m playing to win, see the above steps. Otherwise, I’m playing for next year, see the following steps.

So, you’re in the bottom third of your league or in the middle third but know you can’t compete. That is unfortunate. There’s only one winner in each league. At least you know that won’t be sooner and you can come to grips with it? I know, it doesn’t make it easier. We have a support group and meet on Tuesdays. I’ll bring the donuts. Ok, now that you’ve dealt with the sorrow of knowing you won’t be competing, what do you actually do with your team? It’s time to sell. Some people will hold fire sales getting rid of every worthwhile asset to get as many rookie drafts picks as they can. That’s not me. I don’t want to go full rebuild if I don’t have to, I just want to retool meaning I just want to trade away players I think have no relevance to me past the current year.

Just because you’re not competing doesn’t mean you need to trade away a player like Courtland Sutton. He should still hold value and be able to help you next year. When trading away the players I don’t want, I’m only looking for two things: rookie draft picks and players who I expect to increase their market value between then and the next year. That’s it, simple.

An example of this type of player from last year is Travis Etienne. According to DLF Startup ADP in October 2021 Etienne was RB24 because of this injury. But there was reason to believe that once he was healthy his value would increase. This proved to be true as by August 2022 he had a Startup ADP of RB11. That’s what you want. Also, you need to be okay with not getting market value for the players you’re trying to trade. I’d rather get 80 cents on the dollar for a player who can’t help me next year than end up still having them on my roster because I wouldn’t take the 80 cents.

Hopefully this we’ll help guide you as you determine your place in your league. Good luck on your way to winning your league.

Wyatt Bertolone
Contributor at Dynasty League Football
Wyatt is a 20 year Fantasy Football obsessor and a converted redraft player now in love with dynasty. His biggest passions are best player available drafting, playing in unique leagues, the smell of a fresh trade in the morning, and the sweet taste of victory.
Latest posts by Wyatt Bertolone (see all)
Dynasty Fantasy Football: To Rebuild or Not to Rebuild?

That was a fairly thorough look through the options available. While there are variations in each third, the directions are similar. If too many players in league don’t pick one or the other, a league can get stagnant or fold.