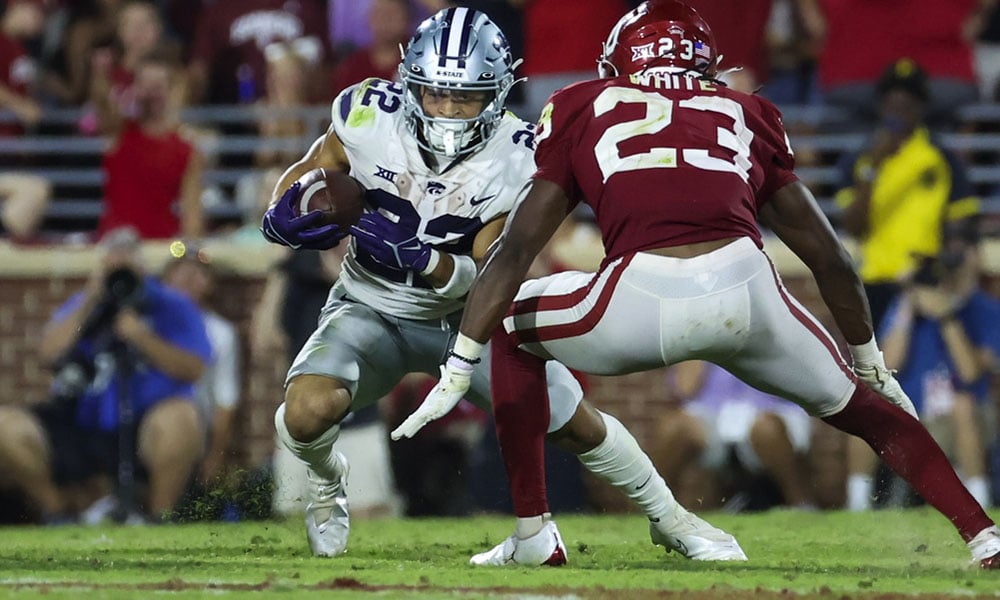 We discuss the weekend’s performances from some of the top players in college football.

Week four was a fun slate of games. Clemson and Wake Forest scored 96 combined points in a game that led to an overtime victory for Clemson. Oklahoma got upset by Kansas State. The SEC had some big matchups with Arkansas battling Texas A&M and with Florida and Tennessee going at it.

If anything, week four is a major indicator that the college football season is heating up. It’s going to be very important to be glued to the television on Saturdays because the drama is going to start to unfold.

Hooker is one of the most underrated quarterbacks in college football. He was building his draft stock in 2021 and now he’s adding to his portfolio. He shined against Florida, leading Tennessee to a 38-33 victory, giving the Vols a 4-0 record. He completed 22 of his 28 pass attempts for 349 yards and two touchdowns. Hooker is going to get drafted higher than expected in the 2023 NFL Draft. He is very efficient and is smart with the football. He has proven to be a reliable passer over the last couple of years.

In a shootout against Notre Dame, Maye passed for 301 yards and five touchdowns. He completed passes to nine different receivers. Maye is currently tied with CJ Stroud and Will Rogers with a leading 16 touchdown passes. It was a rough 45-32 defeat to the Fighting Irish, but Maye made some big-time throws and looked like a top-tier quarterback prospect.

This is such a tight window throw from CJ Stroud to Emeka Egbuka. Ripped that thing in there between the CB and S for his 4th TD pass tonight. pic.twitter.com/MVmDbWAbWb

Stroud sliced up Wisconsin in week four. The game got out of hand very quickly and that was due to Stroud’s ability to fit the ball into tight windows and make the correct read with the football. He completed 17 of his 27 pass attempts for 281 yards and five touchdowns. He also tossed one interception and completed 62.96 percent of his pass attempts.

Corum had a career day against Maryland, rushing for 243 yards and touchdowns. He’s a stocky running back who does everything well. He has excellent vision and patience and enough speed to burst through the second level of the defense for a long gain. Corum is currently averaging 3.22 yards after contact per attempt on the season.

🎥 Clemson running back Will Shipley gashes Wake Forest's defense for a 53-yard run on the opening offensive play for the Tigers. pic.twitter.com/O2iXjlwLwX

For some reason, Shipley is still a very underrated former five-star recruit who has been productive in a not-as-optimal as advertised situation at Clemson. He led the charge in an overtime win over Wake Forest by rushing 20 times for 104 yards and one touchdown. We also saw him catch three passes for 15 yards.

During the recruiting process, many people were excited about how good he was at catching the ball out of the backfield. However, we are four games into the season, and he has just six catches on the year. There are other talented pass catchers in the offense, but Shipley has demonstrated the ability to be split out and run routes. It just hasn’t been something that hasn’t been implemented in the offensive game plan.

Deuce Vaughn is SO shifty 🔥pic.twitter.com/2nrgS3iv69

Vaughn has another big performance against Oklahoma where he rushed for 116 yards while catching two balls for 13 yards. Detractors will point to his size as a reason to not draft him in dynasty. However, he’s been very productive and is a dynamic playmaker in the open field. He is very shifty and his ability to catch the ball out of the backfield will make him an important asset for his next team in the NFL.

Achane is increasing his draft capital by the game. Special players have the potential to take over games and Achane has that ability. In a tough matchup against Arkansas, we saw him carry the ball 19 times for 159 yards and one touchdown. This was his biggest performance of the season. With what we’ve seen from him on the field, once he makes it to the NFL, he has the potential to become a valuable fantasy asset in the right situation.

Judkins is going to take over as the lead dog in Ole Miss’ backfield once Zach Evans leaves for the NFL. It was his turn to perform against Tulsa when he rushed for 140 yards and two touchdowns. He’s another fun running back prospect to keep tabs on this season.

Robinson is always a big play waiting to happen. By far he’s the best running back in college football and he’s making the 1.01 draft pick in rookie drafts almost not obtainable. Against Texas Tech he rushed for 101 yards and two touchdowns while catching one pass for 22 yards. If he’s on the field, then there’s a chance he’s going to make something happen.

72-yard TD run for @THEJAYDNOTT. 274 yards rushing on the day for the freshman!

The former four-star recruit exploded for 274 rushing yards and three touchdowns against Arizona. He took over in this game by breaking off multiple long runs. There were plays where it looked like he was being shot out of cannon. Ott is a running back to monitor for the rest of the season.

The fifth-year senior is rejuvenating his college career at USC. Last season at Oregon he rushed for 1,271 yards and 16 touchdowns. Now at USC, he’s proving that he can be the lead back in the offense. Against Oregon State, he rushed for 133 yards and one touchdown. Dye is a solid running back prospect who can run between the tackles and keep the chains moving.

Nobody can slow CJ Stroud and the Buckeyes offense. Emeka Egbuka has looked like yet another future NFL playmaker so far this season. pic.twitter.com/9QAZzzyqLi

Egbuka is a playmaker. He leads the team with 231 yards after the catch and averages 8.9 yards after the catch per reception. We don’t need to see him do much more on the field to consider him a potential first-round draft pick. He’s very nuanced and has the athleticism to score from anywhere on the field. This was also his third-straight game with over 100 yards receiving.

The former five-star wide receiver from the 2021 recruiting class has his moment last night when he caught six passes for 117 yards and two touchdowns in a blowout victory against Vanderbilt. It’s good to see a young prospect perform on the field while playing on a very competitive Alabama team. We should expect to see him grow into his role as he develops.

Cowing let Arizona in receiving against California by catching seven passes for 133 yards and one touchdown. The former UTEP standout is proving that he can produce against the power-five competition. Last year he caught 69 passes for 1,354 yards. At his current pace he will barely make the 1,000-yard threshold, However, he’s a player that posts blow-up performances and is a big part of the offense. Those numbers could drastically increase in the next few weeks.

It’s time to get worried about Johnston. We are three games in and he has caught just eight passes for 73 yards. We were expecting big things from him going into the season. Some had him as the best wide receiver in college football. TCU is not known for their passing game, but considering he has an 8.3 market share of TCU’s passing production, it’s time to start thinking about what’s going on.

He should have transferred out of TCU. This isn’t the most optimal situation for him. Considering what we saw from him last season and how the passing game works at TCU, it might be a good time to see if you can catch Johnston on the cheap in your league. I would just look at him as more of a speculative asset at this than more than a sure thing.

Notre Dame and UNC are all tied up!

Downs is still one of the best wide receiver prospects in the 2023 NFL Draft class. Against Notre Dame, we saw him score two touchdowns. His ability to manipulate space and create separation projects him as a good fit for the next level. At this point, he is just trying to add points to his stock, but he’s ready to make the leap to play on Sundays.

Mayer had another big performance. Against North Carolina, he led Notre Dame in receiving, catching seven passes for 88 yards and one touchdown. He is a pro-ready NFL prospect, but we won’t know what that will mean in fantasy until we know his situation in the NFL. The tight end position is very fickle. A tight end could be very good at what they do and still only provide sub-optimal production for fantasy. Right now, consider him a good prospect and stay Bayesian to his situation.

Bruce Matson
Contributor at Dynasty League Football
I'm a financial counselor for a hospital in South Central Ohio. I graduated from Muskingum University with a bachelor's in business while minoring in Economics and Accounting. I won my first fantasy football title with Jake Plummer as my quarterback.
Latest posts by Bruce Matson (see all)
Devy Fantasy Football Wrap-Up: Week Four