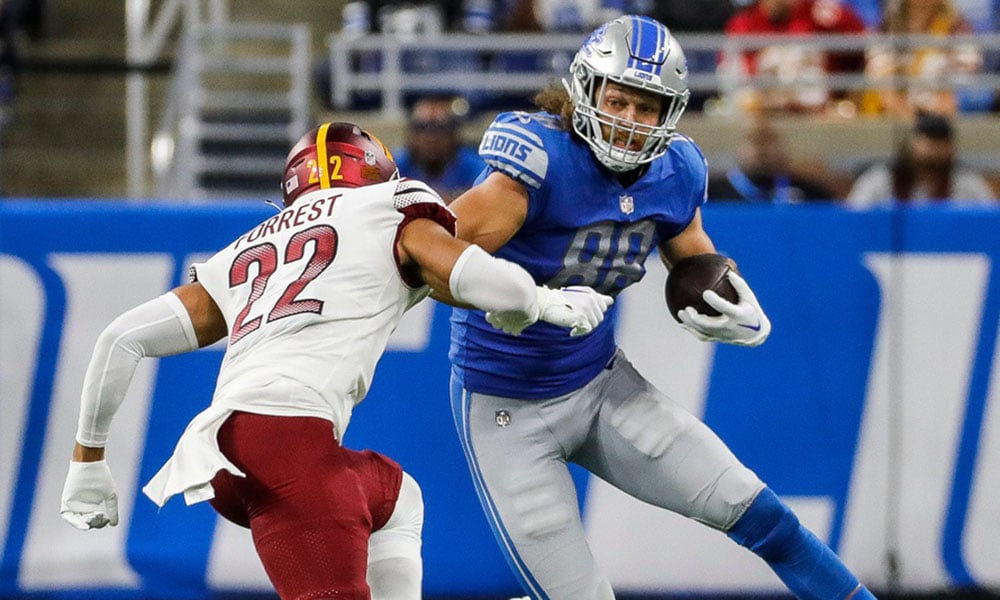 Corey Spala is back to discuss some of the more intriguing dynasty storylines this week.

Welcome to the weekly ‘Six Pack’, where I will be giving six storylines to pay close attention to. Keeping tabs on these will keep you prepared and informed throughout the season. I will touch on individual players or even a coach with the scheme and roles within. As the season progresses, I will try to stay ahead of the curve and note topics worth mentioning.

I Pitts the Fool

Atlanta Falcons tight end Kyle Pitts has seen 50% of his targets so far this season against cornerbacks, which is not doing him any favors. Head coach Arthur Smith will need to be more creative with play design. With only four receptions through two games, frustration builds if you have Pitts as an asset. Take a deep breath. Exhale. It will be okay (I am talking to me).

It is only two games. Hopefully, Smith will not keep blocking Pitts and instead will design plays to get the ball to the stud tight end. It should be noted Pitts’ blocking went down from 20% pass block snaps in week one to 8.5% in week two. He is an elite prospect and a game-changer at the position for fantasy purposes.

Head coach Dan Campbell has this team fired up and ready to play. The offensive unit is clicking and bringing fantasy production. However, TJ Hockenson has yet to pay dirt. It will be noteworthy to see if any offensive adjustments are done to get him the ball. Touchdown dependency is not intriguing.

Amon-Ra St. Brown is a certified stud and has silenced the critics. Jameson Williams will be coming back, and D’Andre Swift will round out this exciting trio. Poor Hockenson. This is a fun team to watch and consequently is a fun team to have assets from on your rosters. Unfortunately, in general, if a tight end is not a top two target in their offense, then I am out on them as an “elite” option. This only matters for fantasy/dynasty football. In ‘real’ football, the Detroit Lions are exciting and will surprise people as the season goes on.

Following Trey Lance’s season-ending injury, Jimmy Garoppolo finished the game against the Seahawks with two touchdowns. Upper management was ready to hand the keys to Lance, but it is evident the locker room still loves Garoppolo.

I am expecting Lance to come back and be the starter in 2023. For now, Garoppolo will be playing for a contract for his next team. I am not knocking down any offensive player for immediate fantasy production. Kyle Shanahan knows what he has from his quarterback and will continue to do what he wants to do.

The Bengals invested millions of dollars into their offensive line during the 2022 off-season only for it to resemble their 2021 offensive line. It should be noted quarterback Joe Burrow is responsible for some sacks, as he has been holding the ball for far too long. That might be splitting hairs, but there have been 13 sacks allowed through two games.

I am assuming the unit needs time/reps to become a cohesive unit. In other words, you simply cannot just pick players and expect them to play well together like you would do in Madden.

Hopefully Burrow and the line will figure out their problems. As we already know, their big trio of Joe Mixon, Ja’Marr Chase and Tee Higgins will be involved and producing regardless.

Mike McDaniel and his Two(ah) receivers

Sorry for the bad pun. Tua Tagovailoa has exploded through the first two games, leading the league in passing yards with 739. Tyreek Hill and Jaylen Waddle are a lethal duo for the McDaniel-led offense. The duo are the only options over 10 targets, and they both have over 20.

I am sorry if you were a Mike Gesicki fan or thought Chase Edmonds would have an important role. To be fair, it only has been two games. This week three matchup against the Buffalo Bills will be an awesome game to watch following their week two victory against the Baltimore Ravens.

I wrote about Joe Flacco and Zach Wilson ahead of week one. Flacco is leading this team so why would the Jets turn back to Wilson? Maybe they would. Maybe it does not matter. Flacco is spreading the ball around by having six receiving options over 10 targets, and rookie Garrett Wilson has more than 20. Elijah Moore‘s usage is concerning through two games, but it is two games.

There are tons of takeaways from this current team, like Tyler Conklin being second in targets or Michael Carter being tied for the lead in receptions. This system is spreading the ball around having multiple options involved.

The important takeaway will be to not panic. Remember the theme of the article? It only has been two games. We are playing dynasty and panic-selling Kyle Pitts or Elijah Moore is not the move. Acquiring proven individually talented assets in these times is the correct move.

There are other storylines like Jameis Winston and his back fractures and now ankle injury. Justin Herbert and his rib injury may likely set him out for one game. But they may well be small storylines right now.

Corey Spala
Contributor at Dynasty League Football
Corey studies human behavior and analyzes data for a living and applies it to dynasty football. He utilizes a blend of data and humor to guide you through articles and/or videos. Shoutout to the process and shoutout to (hopefully) helping you in your dynasty leagues.
Latest posts by Corey Spala (see all)
Dynasty Fantasy Football Six Pack: Week Three Storylines to Watch