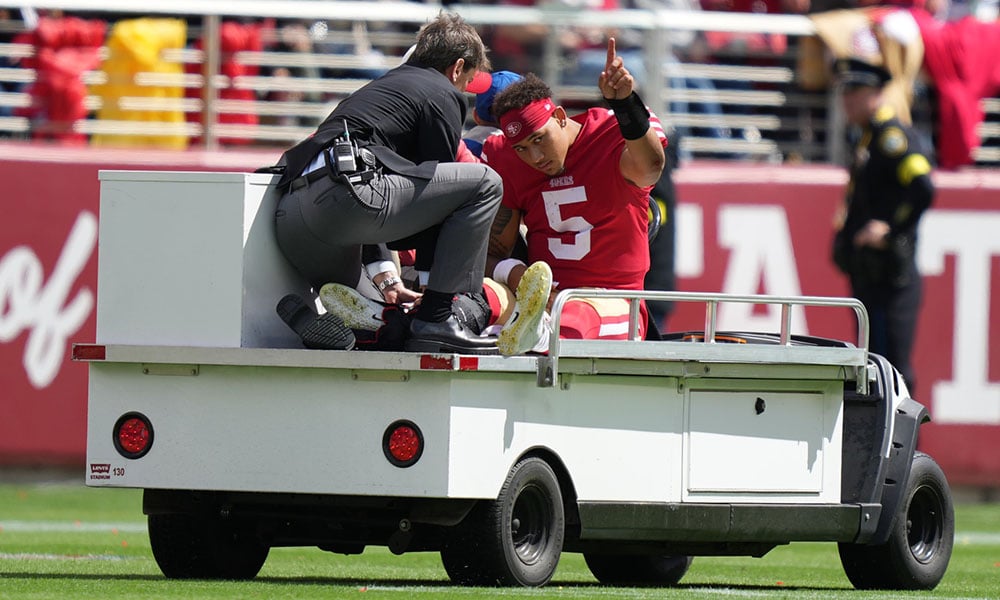 We round up another week of devastating injuries.

Inevitably, we witnessed more impactful injuries in week two of the 2022 NFL season.

Fantasy Impact: We found out on Sunday that Winston has several fractures in his back. The report stated that it is low concern and should not limit Winston, but I disagree with that part. He is likely playing through pain, particularly every time he takes a big hit. I would recommend stashing Taysom Hill everywhere you can, just in case one final big hit knocks Winston out of a game and you all of a sudden have a cheat code at TE. As for his weapons, Michael Thomas likely doesn’t see a dip in production, but Chris Olave and Jarvis Landry very well could due to Winston’s decreased accuracy downfield on deeper throws that require more velocity and twisting. Monitoring this one closely.

Fantasy Impact: I do believe Herbert has a chance of playing in week three, however he most likely won’t due to a weak matchup against Jacksonville as well as the Chargers playing it safe with their elite quarterback. Having Herbert healthy for the entire season is far more important than having him playing injured for one week. Bank on a week four or five return.

Fantasy Impact: Must I talk about this one? Lance will miss the entire season (please do not believe those false statements about him being able to play in three months… no). The troubling factor is that by 2023, he will not have played an entire football season in three full years, while likely having a production dip in rushing ability in his first season back from his ankle injury. Major bummer.

Fantasy Impact: Conner suffered a low ankle sprain that may cost him a week. He was unable to return to the game but was seen standing on the sideline with teammates still in full gear. This could be low severity leaving him with a chance of playing this week, but the odds are that he misses one game. Monitor his practice status closely.

Fantasy Impact: I need to keep an injury slot open every week for a 49ers running back, don’t I? Davis-Price slotted in as the RB2 behind Jeff Wilson and did not impress while also walking (limping?) away from the game with a high ankle sprain. He will miss several weeks, opening the door for preseason stud Jordan Mason to hopefully get some running back snaps this week. Marlon Mack lurks in the shadows.

Fantasy Impact: Kamara was unable to practice last week. Rib sprains can be very painful to play through, especially as a running back, but I do believe he has a shot at playing in week three. It all depends on his healing rate and pain levels. Monitor practice status.

Fantasy Impact: Bernard was unable to return to last week’s game after reinjuring his ankle. I would say this puts Rachaad White on the map, however Leonard Fournette wound up seeing 87% of the snaps at RB, leaving little room for White. Fournette is currently dealing with a hamstring strain and may wind up worsening it if he continues to play at a tremendously high snap percentage, so I would strongly consider inquiring about White.

Fantasy Impact: The Chargers played on a short week Thursday night against Kansas City, so Allen was unable to suit up. Typically there’s a two-three week timetable for return while also having reinjury risk if the return is too soon, but there’s a chance he is able to return this week.

Fantasy Impact: My goodness, how badly do the Colts need Pittman to play? They looked horrendous without their bonafide star WR. The bad news is, he would only be roughly 10 days out from his injury by week three, so I do believe there’s a chance he doesn’t return just yet. Monitor practice status this week closely, hopefully he is able to get in a few limited practices.

Fantasy Impact: Evans has been suspended one game for an altercation while protecting his BFF Tom Brady. The suspension may help him recover closer to 100% from the calf strain he’s been dealing with, so this might be a blessing in disguise for the rest of the season.

Fantasy Impact: Jones will need to ramp up his practice status in order to be able to play this week. He was a game-time decision last week before being listed as inactive, but let’s see what a week can do for him. There’s been no confirmation of his actual injury, so hopefully it really is minor.

Fantasy Impact: Jeudy left the game early and never returned after suffering a chest/rib injury. He has been listed as day-to-day, but I do believe he misses this week, with a chance to return in week four.

Fantasy Impact: The Bills are optimistic about Davis being able to play this week, but keep an eye on his practice status. He suffered the ankle injury on Saturday and was unable to play Monday, so depending on the grade he may wind up missing one more game.

Fantasy Impact: Meyers was unavailable for the end of the game this past week due to knee soreness, something he dealt with throughout preseason. Monitor his practice status for his availability this week.

Fantasy Impact: Robinson likely has an MCL sprain, spotted at practice with a knee brace, indicating he has instability. Return to play is likely over the next one-three weeks.

Fantasy Impact: Kittle was close to playing in week two, but the team held him out for one more week. Everything I’ve read indicates that he will play in week three and ready to go.

Fantasy Impact: Schultz has been rumored to be out for this week, which lines up with a PCL sprain and possible bone bruise. I won’t be surprised if Schultz misses two-four weeks, so have a backup plan at TE. This is also a good time to buy low on him, as by the time he returns we will likely also have Dak Prescott back on the field (or soon after).

Fantasy Impact: Jordan has been playing through an ankle sprain, possibly why his snap count dropped from 60% in week one to 37% in week two. He should be off the fantasy radar until further notice.

Fantasy Impact: I want to put Robinson on your radar now because there is a realistic chance he returns for week five. He has been spotted doing agility drills on the side with trainers. You may want to get a jump on your league-mates if he’s out there on waivers or available for cheap in a trade.

Jeff Mueller
Contributor at Dynasty League Football
Jeff is a Doctor of Physical Therapy with a specialty as a Certified Speed & Agility Coach. He enjoys outdoor activities such as hiking in Yosemite with his wife and dogs and has been an avid football fan since birth (go 49ers!). He also firmly believes that everyone needs to invest in a home gym with multiple TVs to watch all of the games on Sunday while working out.
Latest posts by Jeff Mueller (see all)
Dynasty Fantasy Football Injury Report: Week Two

Thanks for this. Just a note – NO signed Andy Dalton specifically so they wouldn’t have to make Taysom Hill a QB again, even if Winston goes down. I don’t think that’s changed..?

For some reason Andy Dalton doesn’t scare me away from Taysom Hill being used at QB, but that’s good to know. I wonder what Dennis Allen would decide (we have to remember it’s not Sean Payton anymore, so you’re right, maybe they never use Taysom at QB again).

“Injury: Knee, Gunshot Wounds”
Sounds like something out of Grand Theft Auto.

Great info. Any word on Godwin?

I didn’t include Godwin because he’s expected to be out this week, but good call. I should have added him in here. Probably returns Week 4 or 5.